"I Lie to Them - Based on a True Story" is a project by Session 22 of the Ecole du Magasin. The exhibition explores the efficacy of fiction in re-telling, re-representing and re-enacting traumatic experiences and unofficial histories. With Mladen Miljanovic, Omer Fast, Critical Art Ensemble, David Ter-Oganyan, Bani Abidi, Agnes Geoffray, Riikka Kuoppala. "The Unborn Museum" by Pietro Roccasalva will gather together around 40 pieces and installations created during the last decade. Their constitutive elements act as characters of theater, each one of them playing their part of a developing score. 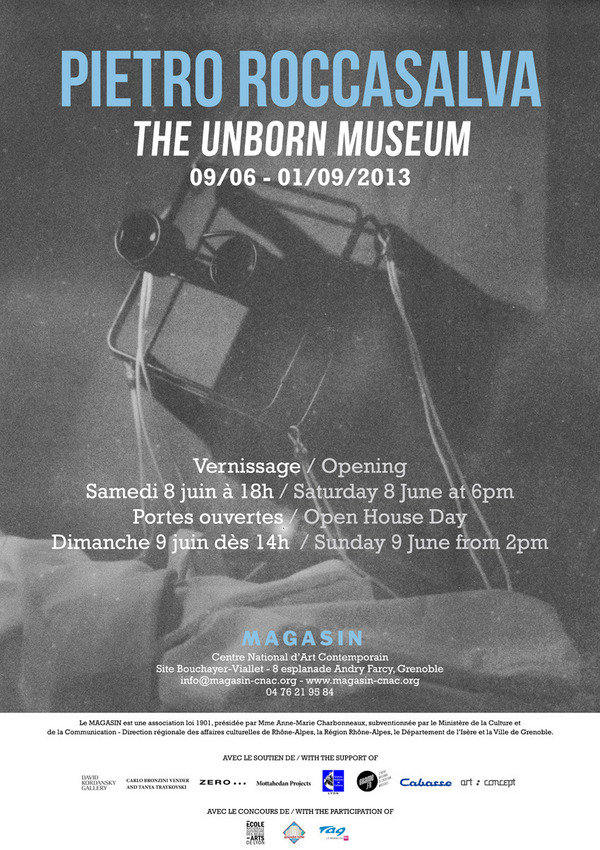 Pietro Roccasalva’s exhibition at MAGASIN will be the first comprehensive solo show of this Italian artist in France. The exhibition will gather together around forty pieces and installations created during the last decade and a new production specially conceived for this exhibition.

The multiple iconological obsessions of Pietro Roccasalva, borrowed from the registers of cinema, music or even art, are developed in complex installations - "alive paintings" or "situazione d’opera". Their constitutive elements act as characters of theater, each one of them playing their part of a developing score. Painting seems to hold the deepest aspects of the artist’s practice for which it is both the starting point and the completion, even in his sculptures, installations, digital works, drawings, movies, performances and tableaux vivants.

The artist has the project to present them room after room according to a principle of mise en abîme that founds his work. Each piece seems to stem from the internal structure of the one which precedes it, quoting it and at the same time leaving an open door to what has never been, as a pure "potentiality". In this way, the artist will by-pass the stumbling block of a chronological or thematic exhibition to favor the links and the connections which exist between the works.

The title of the exhibition refers to a dimension of “potentiality”. “The Unborn Museum” is an oxymoron; it refers to an “intermediate world “ between the artworks or museums as places of memories, a deposit of the remains of a process and a potential dimension which as such contains other processes until now inexistant (unborn). “The Unborn Museum » is thus a paradoxical place to remember “remains” which have never been.

ABOUT THE ARTIST
Born in 1970 in Modica, Pietro Roccasalva lives and works in Milano, Italy. He has participated in numerous shows in Italy and all over the world. His latest solo exhibitions have been shown at David Kordansky Gallery, Los Angeles (2012), GAMeC Galleria d'Arte Moderna e Contemporanea, Bergamo, Italy (2007), Art Statements, Art 39 Basel (2008) and at Fondazione Querini Stampalia, in Venise (2006). His work has also been on view in group shows at at David Roberts Art Foundation, London (2013), Bonniers Konsthall, Stockholm (2010) and the Museum of Contemporary Art, Chicago (2009). He also took part in the Venice Biennale (2009) and Manifesta (2008).

A monographic catalogue will be published on the occasion of the exhibition. It will constitute the most ambitious work dedicated to Pietro Roccasalva so far.

«I lie to them.» Based on a true story
An exhibition and online project by Session 22 of the École du MAGASIN :

- How would you like it if we tried to compose history ? - I would like nothing better. But which ? - Indeed, which ?
Gustave Flaubert, Bouvard and Pécuchet

I cannot trust quotations. They always lie, because essentially they are paratruths. Speak with your own words, clumsy, unconvincing and unintelligible, but yours. And don’t forget that every fable is a potential truth.
Anonymous

What moves us, irks us, makes us think, emote or react ? What drives the need to acknowledge a past event or person, a story neglected or silenced, one that is considered unpopular ? Can the retelling of marginal histories represent a form of resistance ?

The exhibition, "I lie to them." - Based on a True Story, explores the effectiveness of fiction in re-telling, re-representing and re-enacting traumatic experiences and unofficial histories. The artists blur the boundaries between real and fake, employing strategies of manipulation to create new narratives appropriated from archives, news images or war witness accounts ; while questioning both the medium and source’s authenticity. But how do we know what is true if the narration of the story changes every time ?
The act of re-telling presupposes different degrees of comprehension that "occupy" and control the flow of (hi)story by taking a stand in its construction and production of meaning. As for the gathered artworks, are they simply some other subjective versions added to the plethora of stories used by the authorities or the media ? Can their inherent creation processes recall the lies, the alleged truths to which we are exposed almost daily ?

In order to comment on or transmit a traumatic experience, such as a war, do we need to have survived or witnessed it ? Within the exhibition, the constellation of fragmented narratives refers back to historical tragic events for instance from the Second World War or the conflict in Bosnia-Herzegovina to the current state of fear caused by terrorism or social displacement. Re-telling establishes a new relationship with History and, within the context of the exhibition, unfolds on three levels : the disconnection between the actual trauma and the narration of its experience ; the (thematic) leveling of historical content of the narratives within the exhibition ; and the continuing relevance of re-reading these narratives as a reflexive tool that mirrors today’s state of precariousness.