Soul is an exhibition of new sculptures by Ugo Rondinone complemented by Human Nature, a large-scale installation presented by the Public Art Fund. Chiaroscuro by Jay DeFeo spans the years 1971 to 1989 and includes paintings, drawings, and photographs. April is an exhibition of works by Trisha Donnelly, Eva Rothschild and Mark Handforth Blackbird present their works outside in Maagplatz. 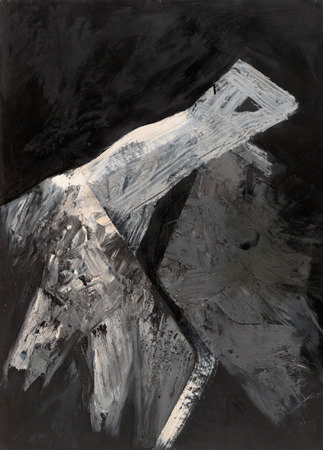 Gallery Eva Presenhuber is pleased to announce “soul,” an exhibition of new sculptures by Ugo Rondinone. Rondinone has long embraced a fluidity of forms and media. Taken as a whole, his work represents a complex network of responses to social and physical structures. By allowing himself the freedom to work within a wide variety of disciplines and media, Rondinone creates the conditions necessary to explore a broad emotional range.
His work has become widely recognized for its ability to channel both psychological expressiveness and profound insight into the human condition.

For the series of sculptures included in “soul,” bluestone – the material out of which the works are made – has been rough-cut into blocks, which are stacked atop one another to form the human figure. The methods by which the stone has been worked are apparent to the viewer, and have not been obscured by subsequent handling.

Visible traces, including drill-holes and split structures, evidence the work done at the quarry, where the blocks were removed from the ground. The work evinces the true nature of the stone: heavy and coarse material, marked by wind, weather, and corrosion. The simple presence and natural surface of the sculpture contrasts with the artificial surface of the poured concrete pedestals. The exhibition itself functions as a sort of hall-of-mirrors turned inwards. The stone figure is repeated and reflected in several scales, and installed in an immersive raw concrete environment.

The exhibition will be complemented by “Human Nature,” a large-scale installation presented by the Public Art Fund. Nine 16 to 20-foot tall stone sculptures will be on view April 23 through June 7 in the plaza at Rockefeller Center.

Born in 1964 in Brunnen, Switzerland, Rondinone has recently been the subject of solo exhibitions at: the Museum of Cycladic Art, Athens, Greece; Kunst Historisches Museum Wien, Wien, Vienna; Museum Dhondt Dhaenens, Deurle, Belgium; and Museo de Arte Contemporáneo de Castilla y León, France. This year, Rondinone will have solo exhibitions at Museum Leuven, Brussels, Belgium, and at the Art Institute of Chicago. In 2007, Rondinone represented Switzerland at the 52nd Venice Biennial and curated “The Third Mind” at Palais de Tokyo in Paris. He currently lives and works in New York.

Galerie Eva Presenhuber is happy to announce it's first exhibition of works by the american artist Jay DeFeo (1929-1989) in Europe. The exhibition will comprise works from the Jay DeFeo Trust concentrating on the intensive working period of the nineteen-seventies and -eighties.

This exhibition at Galerie Eva Presenhuber, which spans the years 1971 to 1989, the year of DeFeo’s death, includes paintings, drawings, and photographs that are not widely known. All were made after DeFeo stopped working on The Rose, her most famous painting, which was subsequently transported from her studio at 2322 Fillmore Street, San Francisco, to the Pasadena Art Museum and which is nowadays in the collection of the Whitney Museum, New York. Immediately after the painting left her studio, Jay DeFeo didn’t start making art again until 1970, when she set up her first studio since leaving Fillmore Street.

In 1971, DeFeo actively took up photography and began making gelatin silver prints and photograms. She also cut up photographs and incorporated them into collages. Although the artist became serious about photography long after she was accomplished in a variety of media, she demonstrated mastery right from the start. The wide-ranging body of work that she made in the medium of photography, much of it done in the 1970s, constitutes a self-sufficient oeuvre within her diverse body of work. At the same time the photographic works in the exhibition show precisely the strong relations between all the different kinds of approaches Ja DeFeo has choosen. By isolating objects such as an animal skull or a woman’s high-heeled shoe, DeFeo evokes the past, the ravages of time, and the unimaginable future. DeFeo may have frozen a moment, but it is one in which the viewer becomes highly conscious of time’s inescapable effect. And yet, for all the melancholy suffusing these particular photographs, her inclusion of a flower bud and filigreed box introduces a powerful note of renewal and transformation.

DeFeo’s palette for the majority of her works is largely grisaille, running from white to black. She could apply paint as thick as cement or make a line as fine as eiderdown. In her paintings and drawings—which she usually referred to as either portraits or landscapes—she often collides the abstract and the representational, feeling no need to choose one over the other. At times her work is more overtly representational; other times it is more abstract and elusive. She veers between the two because she is always looking for ways to make her vocabulary of symbols fresh. Even when she is at her most abstract, as in her series Impressions of Africa, the viewer senses a perception or memory of an actual thing, which the artist worked on until she developed it into a satisfactory symbolic form.

Jay DeFeo's work is receiving increasing posthumous recognition. Her work is in the collections of the Whitney Museum American Art, the Museum of Modern Art, the San Francisco Museum of Modern Art, the Art Institute of Chicago, the Norton Simon Museum, the art museum of the University of California, Berkeley and Mills College Museum of Art. The Whitney holds the largest public collection of her work and is currently showing a major retrospective running until June 2, 2013.