Covering more than 2 decades of activity, the exhibition intertwines early works - such as the black and white photographic series, the installation of the documented performance - with very recent ceramic sculptures and new ink drawings. Jamie's installation Inner Planets at the Old Botanical Garden comprising 42 clay masks, held in cooperation with Art in Public Space Zurich. 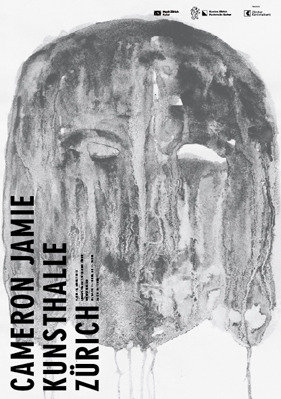 Kunsthalle Zürich presents a comprehensive solo exhibition by the American artist Cameron Jamie (born in 1969 in Los Angeles), which reveals the wide diversity of media he employs in his artistic production. Covering more than two decades of activity, the exhibition intertwines early works, such as the black and white photographic series Front Lawn Funerals and Cemeteries (1984 – ongoing), the installation of the documented performance The New Life (1996) and its related cloth/vinyl mask Self-Portrait (1992), with very recent ceramic sculptures like Ma Blue (2012) and new ink drawings. For the first time, the artist has allowed his drawings, sculptures, ceramics and objects to be shown in dialogue with his films BB (1998–2000), Massage the History (2007–2009) and Kranky Klaus (2002–2003), which portray both the American and European vernacular and amateur traditions through a radical arrangement of images and sound.

The leitmotiv of the exhibition is the mask, a figure that constantly surfaces in a variety of Cameron Jamie’s works down through the years. A metaphor for the dialectic game of concealing and revealing the individual’s identity, the mask stands for the fragile boundary between private and social conduct. In his earliest works, the mask was an allegory of the persistence of vernacular rituals in urban societies. Cameron Jamie's sculptures and ink drawings further develop this motif to explore the layers of the body as a territory of analysis and investigation. The media of drawing and ceramics allow the artist even greater radicalism and intimacy in his works, in which both the immediacy and the fragility of existential themes are tangible.

Cameron Jamie’s perspective on suburban culture, the appropriation of vernacular rituals and the persistence of obscure, magical elements in our society is both a sympathetic and an analytical one.
He has been manifestly nurtured by the same kaleidoscopic culture that he portrays. It would be a mistake to interpret his fascination with popular activities and behaviour as a way of blurring the boundaries between high and low culture. Today, pop culture is largely accepted, not only in mainstream cultural production but also in prestigious cultural institutions and in academia. Instead, Cameron Jamie is interested in marginal realities and amateur home-based practices that reveal the hidden face of our society. In addition to the theme of the mask, violence is another recurring subject in the work of the artist, a violence that appears to feature in every activity that the artist observes, from his native Los Angeles to Alpine villages in rural Austria. The subtle presence of violence is mostly depicted in the film works of Cameron Jamie. In The New Life (1996), the artist documents his own staged fight against an impersonator of Michael Jackson. In the well-known film BB (1998–2000), the violence is further explored as an amateur wrestling show performed in the backyard of a suburban home. Equally descriptive is the film Kranky Klaus (2002–2003), which portrays the annual ritual of Krampuslauf in Austria.

Massage the History (2007–2009), his most recent film, offers another view of a marginal reality and presents a private performance by amateur dancers in their living rooms in Alabama. Yet, it also clearly depicts an unconditioned fascination with the poetry and beauty that arises in unexpected places. As the dancers move in elegant and explicit ways, engaging in a provocative dance with the living-room furniture, the underscoring music by Sonic Youth provides a hypnotic soundtrack to the film, emphasizing its mesmerizing atmosphere. Music and sound is undeniably an essential component of Jamie’s film work; the artist has collaborated with musicians like The Melvins and Keiji Haino, for example, who have also provided compelling soundscapes for his films.

The works presented in this extensive exhibition clearly position the artist outside the conventional paths of contemporary artistic production while also establishing the uniqueness and significance of his practice. The two floors of Kunsthalle Zürich have been adapted and arranged to exemplify the tension generated by the confrontation between the inside and the outside, which is illustrated by the wide-ranging and varied selection of the artist’s works.

The Cameron Jamie exhibition presented at Kunsthalle Zürich will travel to additional venues. Further information will be available on our website.

Publication
A comprehensive catalogue of Cameron Jamie’s exhibition will be published by JRP|Ringier Kunstverlag.