At the centre of "Draw the Line" by Jimmy Robert is a commissioned performance project that takes place within this installation of new and past work at The Power Plant. "Postscript: Writing After Conceptual Art", featuring paintings, sculpture, installation, video and works on paper from the 1960s to the present by over 50 artists and writers exploring the artistic possibilities of language. 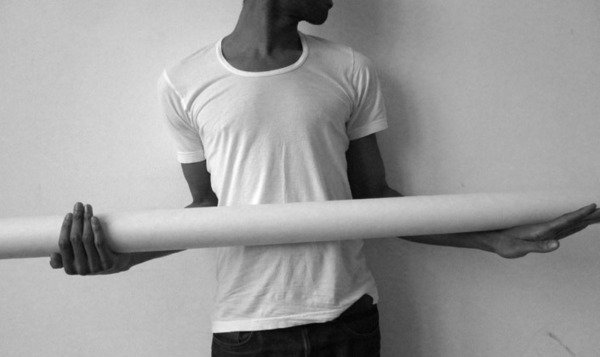 The Power Plant is pleased to present a solo exhibition of work by French artist Jimmy Robert. Robert’s practice typically explores the corporeal potential of a range of media including photography, drawing, film, video, sculpture, and performance. In his first Canadian solo exhibition, Robert addresses questions of limits: of his body, of the media he uses, of our understanding of exhibitions, and the various disciplines his work encompasses. At the centre of Draw the Line is a commissioned performance project that takes place within this installation of new and past work at The Power Plant.

Draw the Line’s focus on performance speaks to the rising interest in performance art among art historians, curators and leading museums. Performance has been an integral medium for visual art practices, gaining momentum during the 1960s and 1970s when artists moved away from the object in favour of “happenings,” “actions” and “interventions.” Such terms reject any theatrical meaning to describe a medium that explores the gestures, marks and effects produced by the body moving and performing in space. Over the past decade, performance has achieved a new kind of institutional position, whereby major institutions are increasingly incorporating performance work in their public programming and exhibitions. During this moment of resurgence, artists and curators alike are faced with difficult questions regarding the relationship between a live performance work and its documentation or exhibition. Draw the Line addresses these queries: following Robert’s performance, text and sculptural remnants will remain in the gallery for the duration of the exhibition to evoke the movement seen in his live work.

Robert’s performance coupled with its remaining ephemera will be accompanied by his sculptural installation Reprise (2010). The work references Canadian artist Jeff Wall’s photograph A Sudden Gust of Wind (after Hokusai), 1993, which captures four figures physically responding to a strong wind. The composition in Wall’s work is a recreation of Japanese painter and printmaker Katsushika Hokusai’s (1760 – 1849) woodcut Ejiri in Suruga Province (Sunshū Ejiri), 1830 – 33. The theatricality in the movement of the figures in both works acts as a point of departure for Robert’s Reprise. Here, he captures in large-scale photographs the movements of dancer Shiho Ishihara with gestures akin to those seen in Hokusai’s and Wall’s pieces. Depicting movement in both the dancer’s body as well as in the installation of the photographs, Robert demonstrates the ability for objects to become performative. Together with his live work, Reprise offers new possibilities for movement and performativity to exist outside a live event.

Movement is evoked in every sense of Draw the Line and in the exhibition framework. Above all else, Draw the Line is an attempt to rethink the limitations of an exhibition, challenging viewer expectations as it unfolds and transforms over time.

Postscript: Writing After Conceptual Art is a group exhibition featuring the work of more than fifty Canadian and international artists and writers. It is the first exhibition to examine the work of conceptual writing, investigating the roots of the movement in the art of the 1960s and 70s and presenting contemporary examples of text-based art practices. The Power Plant brings Postscript to the gallery to explore the place of language within contemporary art and broadly examine its relationship to history.

Postscript includes a selection of writing by Conceptual artists of the 1960s that were specifically distributed in traditional codex form. The contemporary conceptual writing filling the galleries includes paintings, drawings, prints, 16mm films, digital video, photographs, mixed-media sculpture, sound installations, and iPad applications; the historical works on view are distinguished by their increasingly obsolete bound structure. For an exhibition full of copies – of found and reproduced texts, of visual and literary art that mimic one another and echo works from preceding generations – the book binding introduces questions about the role of disciplinary specificity in contemporary reading and writing practices.

The historical works in this exhibition are examples of text-based art generated through practices of appropriation, transcription, translation, redaction, and constraint. The contemporary works on view borrow these same strategies, and in many cases, turn the strategies back onto historical works of literature and art. Postscript brings together different generations and different disciplines to demonstrate that works that look alike can still signify differently.