The exhibition "Studio Matters +1" by Massimo Bartolini for the first time combines a large-scale installation ("+1") with a unique selection of small sculptures ("studio matters"). "Geo-Aesthetics" an exhibition of Maria Nordman's work from a period of several decades and the present. Manuel Burgener is the second young artist who will exhibit in the KunstNu room this year. Each of the 4 rooms in this exhibition "The Collection" serves as a separate chapter discussing various functions that art can assume. 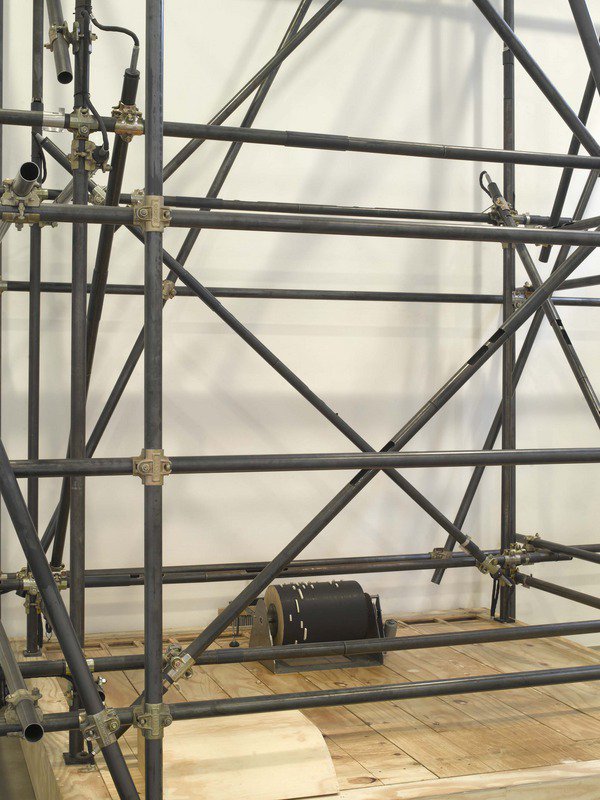 Massimo Bartolini (Cecina, IT, 1962) is considered one of the most important Italian sculptors of his generation. The work best known to us is his BOOKYARDS (2012), an open-air library he created in the vineyard of St Peter’s Abbey as part of the city-wide TRACK exhibition. The exhibition ‘Studio Matters +1’ for the first time combines a large-scale installation (‘+1’) with a unique selection of small sculptures (‘studio matters’). The relationship between Bartolini’s better-known installations and his intimate, more biographical studio work has until now remained virgin territory.
Otra Fiesta (‘+1’)

Bartolini has created a work specially for the S.M.A.K., ‘Otra Fiesta’ (2013), an organ several metres high made of metal scaffolding pipes. ‘Otra Fiesta’ works like a barrel organ that plays automatically: the air blown through the pipes first passes through the holes in the music roll, giving rise to variations in tone and length. For the S.M.A.K. version, the free jazz musician Edoardo Marraffa has written a new composition. The jazz singer Deirdre Dubois sang lyrics by the Argentine poet Roberto Juarroz to this music. Bartolini sees the ‘void’ in Juarroz’ poem and the void that the metal scaffolding visualises as a metaphor for the present state of architecture.

The object sculptures and two-dimensional works on show next to ‘Otra Fiesta’ took shape in the sheltered setting of the studio over the last ten years. The ‘studio matters’ in the title refer to these small objects: ‘studio matters’ means both ‘studio materials’ and ‘the studio is important’. There are ink drawings, collages of found objects and prints that have suffered some damage, but there is also a judo belt stretched between the floor and ceiling, an irregularly-shaped stone balancing on a pearl and enlarged apricot stones in alabaster. They are exercises in the sculptor’s craft that offer an insight into the poetic world of Bartolini’s imagination.

The ‘Studio Matters +1’ exhibition is a joint project by the S.M.A.K. and the Fruitmarket Gallery in Edinburgh, where a differently arranged version was on show from 1.2 to 14.4.2013.

“And this flow of light which could produce a place, this flow of air which could produce a sound, all of it remaining unpredictable, this incidence could have a moment of hesitation, in the case that at least two people are there.” Maria Nordman (POIEMA Notizen / Notes 1970 -, 1982 )
GEO-AESTHETICS an exhibition of Maria Nordman’s work from a period of several decades and the present, opens from 6/21/2013 until September 22, 2013 outside and inside of SMAK Gent.

“Maria Nordman is an artist having developed a long standing relation with the city of Ghent and its Museum of Contemporary Art. Could we call her an artist who develops since several decades an artistic vision whereby the interaction and intersection between a.o.
sculpture, nature, language and time is being re-validated and reconsidered? An artist who seeks to reflect and rediscover the real notion of culture and the city?”
Philippe Van Cauteren (letter from March 18, 2013)

Starting from June 22, the Swiss artist Manuel Burgener (°1978, Bern) exhibits in the KunstNu-area of S.M.A.K. Each year, the Museum of contemporary art invites some promising young artists to realize their first solo presentation. Burgener is the second young artist who will exhibit in the KunstNu room this year.
UNIQUE POSITION

Burgener's sculptures, assemblages and photograms occupy a unique position within the contemporary discourse on sculpture and art in general. While many sculptors of his generation are searching for a relevant and individual position towards sculpture, Burgener makes questions about this position itself. He studies this on a pronounced, almost emotional way. Manuel Burgener works with ordinary materials from daily life such as wood, glass, photo paper and found objects. Thus he questions constantly its position as a sculptor, which he sees as something totally variable.

Burgener's works are constantly in a 'twilight zone' or a 'between status'. You can see his sculptures neither as sculpture, nor purely material. As a result, you might even say that they are neither art nor pure object. Viewed from the perspective of an exhibition: neither presented nor just posted.

This 'in between'-position forms the starting point of the 'KunstNu' presentation. This specific area of S.M.A.K. space carries in fact itself all the characteristics of a 'twilight zone'. It is neither an exhibition space, nor a mere corridor which knows no end nor beginning.

This exhibition was made possible thanks to the cooperation with Pro Helvetia.

Each of the four rooms in this exhibition serves as a separate chapter discussing various functions that art can assume.
Artworks can define and position the human body in its environment, ranging from the museum space to the landscape. They can also reveal movements and activities within the (urban) environment, in the form of prototypical architectures, for example. Or they create situations in which the visitor is given an essential role to play and in which his participation is questioned.

The artworks on display in S.M.A.K. cover various historical periods over the last 50 years. The exhibition ranges from the minimal and post-minimal tendencies, through Conceptual Art and Land Art, to issues illustrative of Relational Art.

Most of the artworks are part of the collection, but S.M.A.K. will additionally invite several guest artists.

S.M.A.K. Museum of Contemporary Art
Citadelpark, 9000 Ghent, Belgium
Hours:
Tuesday through Sunday from 10 am to 6 pm
Closing time cash-desk: 30 minutes before closing of the museum
Closed on Monday
24, 25 and 31 December and 1st January: museum closed
Entrance fees
€ 6: individual visitor
€ 4,5: groups from 15 persons, under-25s, over-60s, students
€ 1: young people under the age of 26
Free: for children up to and included the age of 18, disabled and persons accompanying groups.