This exhibition in motion will be built as a multifaceted and infinite garden theatre. Are invited a selection of international artists who will create specially designed works to inhabit the gardens. They will implement ephemeral living sculptures for the paths and the large Terrace and some indoor areas. 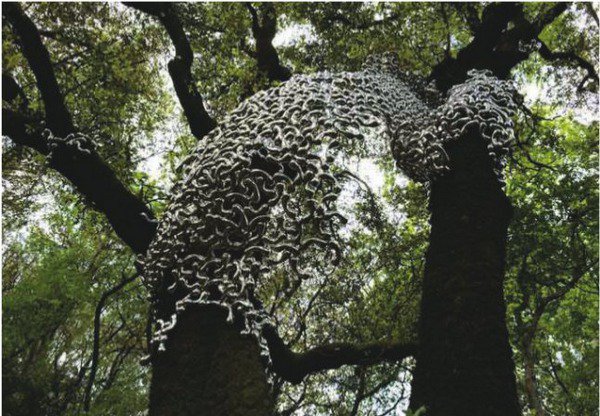 "Gardens, throughout the world, mean both enclosure and paradise."
Gilles Clément

In the context of André Le Nôtre year (Paris, 12 March 1613 – 15 September 1700, Paris ‐ 400th anniversary), we wanted to pay tribute to the great French gardener who gave credibility to the French style of formal gardens and a new way of designing them. Le Nôtre acquired his reputation through his great and many designs including Vaux-le-Vicomte, Chantilly and Versailles (Gardener to king, Louis xiv from 1645 to 1670) ; worthy of particular note, he designed Saint-Germain-en-Laye gardens with their Large Terrace and offset perspective, Wattignies chateau (near Lille, his first garden), then Marly-le-Roy, the Tuileries... as well as Italian gardens in the Turin countryside, the Venaria Reale (the Savoy family estate), the gardens of the Palazzo Reale in the centre of Turin, and gardens in Germany and England. André Le Nôtre also worked alongside Louis Le Vau and Charles Le Brun: he was no stranger to the architecture and painting of his time. He was also a collector.

Many words were penned about the spirit of the French garden at the end of the 17th century, and then again in the 18th, when reactions were more animated. The freer and more « anarchic » English landscaped garden was contrasted with designs like Le Nôtre’s which were more « policed », « mathematical », geometric and rigorous, evoking the thinking of Descartes. Over the centuries, Europe came to envy them. We had great Italian style gardens with their baroque flowerbeds and fountains, and romantic gardens, etc. Then there were the famous, purely ornamental Follies, which appeared in gardens in the 18th century. These were varied architectural constructions inspired by Antiquity : the Temple of philosophy (Jean-Jacques Rousseau’s garden), Greek colonnades, Mongol tents and pagodas, Chinese doors, pyramids, caves, and more particularly in the Désert de Retz (near Chambourcy), or in Belgium, in Beloeil (near Brussels), gardens and follies conceived and designed by the writer and soldier Prince de Ligne.
We refer to this historic filiation, and to the spirit of Nature : « tamed » and modelled by the designers of these historic gardens throughout time. For this tribute to André Le Nôtre, we decided to bring this history through the centuries back to life through his designs and via the perspective offered by the large chateaus and their gardens in their architecture, their layout and their space.

We asked a selection of international artists to think about and create « new contemporary Follies » specially designed to inhabit the gardens. It is a matter, for these artists, of examining their relationship with Nature and the Landscape, and in a certain manner, of reviving the lost subject of the painting and dialoguing with the arts in general. The artists will be able to create ephemeral works according to the place (or longer lasting ones depending on the title of the event and its institutional reception), « in natura » living sculptures to inhabit the park, empty bases, paths and the large Terrace ; their work will also be represented in the landscaped garden... A whole sequence in St-Germain-en-Laye gardens and some indoor areas, around the chateau and the chapel as well, etc. This exhibition in motion will be built as a multifaceted and infinite garden theatre.

The public will be able to rub shoulders with the strangest and most original of imaginations, with their « dreams » in motion, with a constellation of images... It may in particular comprise the composition of a Chinese garden of a thousand surprises: Le Nôtre’s Chinese garden. Special plants will be on view, medicinal plants, flowers, little-known Asiatic vegetables, and a few surprises based around a paddy field... At night, the works in the garden will be lit especially for this exhibition.

We would like to build a fun area conducive to walking and freedom of the imagination aroused by the works created in this historical site. Gardens have always been the subject of the philosophical and political expression of a time, and the signature of a certain way of life. Isn’t it true that the love of gardens is a real passion of the soul?