Curated by Monica Bonvicini. The exhibition represents a temporal, spatial and contentual overview of the 10 years during which she has served as Professor of Performative Art - Sculpture at the Academy of Fine Arts Vienna. 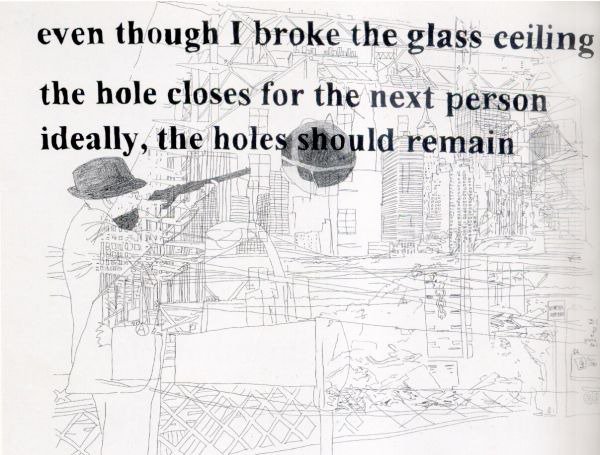 The exhibition is my territory., represents a temporal, spatial and contentual overview of the ten years during which she has served as Professor of Performative Art - Sculpture at the Academy of Fine Arts Vienna.

Early on, in 2003, the exhibition Break it/Fix it was presented by Monica Bonvicini and Sam Durant at the Vienna Secession. One of their collaborative works will be on view alongside the works of the artists with whom Monica Bonvicini has cooperated over the years.

This is how space begins, with words only, signs traced on the blank page. On the sheet of paper is written: “when you open the door, it’s right there on the left next to the light switch.” Before, behind, right, left, above, below. Like all galleries, this one was also very bright. Generously proportioned. Glass front open to the street. A view to the outside through the chain of rooms. When “I” arrived, some were already there. (Others weren’t yet.) “I” stayed. “I” left and came back later. Thus “I” began, and before “I” knew it, it was as if it had been exactly what really happened, a strange matter.

Object 1 etc., Friend 2, a rather massive table. A couple of impractical objects. Folded cardboard in the corner, uncombed paper on the pedestal. Red, yellow, blue. Powder coating, stove enameling. There was something on the floor, a chained hand. “I” have a good long look at all of it. Although “I” knew right away. All in all: “I” was just passing through. Get closer and step back again, say the same thing as something different a couple of times. As already said. “I” stayed a while. “I” left and came back later. (Johannes Porsch, with Reinhard Priessnitz, Georges Perec, Virginia Woolf, Gertrude Stein, Monica Bonvicini)

MONICA BONVICINI, born 1965 in Venice, lives and works in Berlin. Studies at the Berlin University of the Arts and the California Institute oft the Arts, Valencia. Since 2003 professor for Performative Art - Sculpture at the Academy of Fine Arts Vienna.