A survey around the materials and their qualities of fluidity and malleability. Six artists present works that have in common a formal approach dealing with the immaterial and transcendent dimension of the creative process. 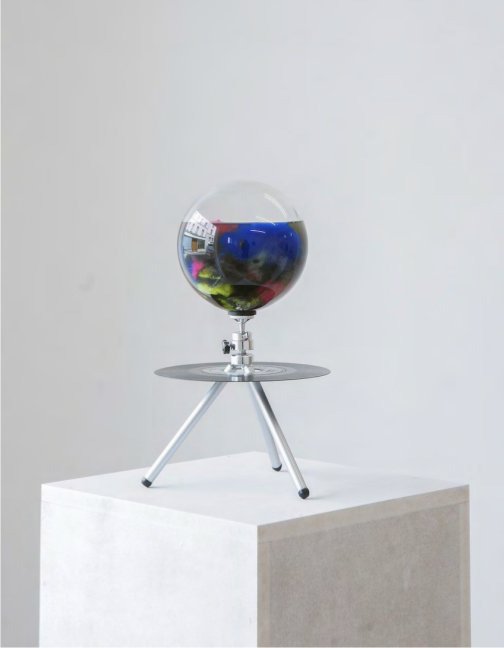 Substance is a survey around the materials and their qualities of fluidity and malleability. The six invited artists present works that have in common a formal approach dealing with the immaterial and transcendent dimension of the creative process, without however omitting the formalizing properties from the used materials for the creation of their works.

Davide Bertocchi's Collider is an installation composed by two sculptures, two spheres containing slime.
Manufactured as a toy for kids, this non-toxic viscous substance would - according to the artist – capture the subatomic particles in the air. Placed under each sphere, the original vinyl records of Imagination's Just an illusion and Erasure's It doesn't have to be tend to enhance the collide between physical truth and the imaginary, between space and mind.

For FRANCE FICTION the formalization of any piece arises from the encounter among all the aspirations by all the five collective's constituents. This new installation as presented shows the result from an invented game whose logical basis is the capacity to characterize the inner qualities of the objects and the possibilities the players can have at their disposal so to relate them together.

G. Küng shows a work titled Lake Diligence where a slow action is taking place. With a plastic sheet folded to hold inky water, evaporation will trace the duration of the exhibition, and the resulting "drawing" will have predictably unpredictable results.

Interested in exploring the potentialities of the materials and their capacity to react depending on the situations, the work of Kilian Rüthemann is inflected in glass slabs hung onto the wall thanks to black acrylic glue. In order to convey the presence of the artistic process in his works, the artist contaminates the space so as to highlight the sculptural and pictorial attributes of the objects and of the selected materials.

Sean Townley presents a sculpture of an articulated cat's paw. The cast urethane material substitutes the traditional marble or granite for a liquid plastic and alludes to a motif of funerary sculpture which has transformed over time.

In the photograph entitled Autoritratto come notte (Self-Portrait as night) Francesco Gennari depicts himself as a night sky, wearing a loden, a beloved item the artist has been using in former works. The presented metonym is the one between his own body covered with textiles and the artwork's nocturnal shades: in that way the artist's body becomes the balancing point of the photograph and the axis around which the night sky is revolving.