Nikhil Chopra's performance evolve over the weekend whilst enjoying a range of activities: a group of significant sculptures by Alison Wilding; the show of new Wallpaper Acquisitions; the stellar works from the Whitworth's collection made by leading European artists with links to the Continent; Revolutionary Light: Blake, Kapoor, Turner; Diaries by Pavel Buchler; Construction showcases abstract works created in the 1960s by British artists. 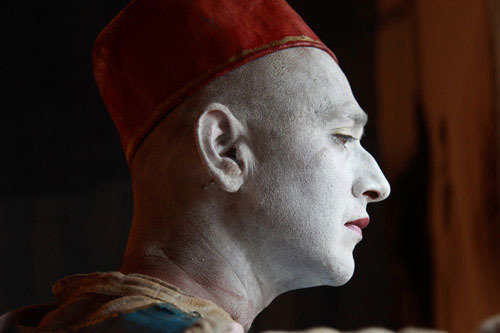 The Indian artist Nikhil Chopra has been widely acclaimed for his performances that use a repertoire of characters to unravel the complexities of colonial India and Britain, along with his own family history. For Coal on Cotton, Chopra is turning his focus to two materials that made Manchester supremely wealthy in the 19th century, and that continue to hold workers in modern slavery beyond Europe and North America.

Held over 65 continuous hours in the shell of the yet-to-be-completed Landscape Gallery at the Whitworth Art Gallery, which will open 24 hours a day for the show’s duration, Coal on Cotton will span centuries and continents. The performance will ask its audience to witness and reflect on connections between the lives of our forebears and ourselves, and on the actions that drive power and possession. In a gallery space engulfed by cotton, Chopra’s work will make connections between Mumbai and Manchester, cities sewn together through Britain’s imperial might.

Friday 5 July, from sunrise 4.49am – Sunday 7 July, until sunset 9.37pm
All the Whitworth’s galleries will be open 24 hours a day for 65 hours and visitors can see Nikhil Chopra’s performance evolve over the weekend whilst enjoying a range of activities for early birds and night owls

Deep Water (1989) is one of a group of significant sculptures by Alison Wilding RA that were gifted to public galleries in Britain through the Contemporary Art Society in 2003. This is the first time that this important work from the Gallery’s collection has been on show at the Whitworth.

Alison Wilding is one of Britain’s most respected artists. Born in Blackburn, Lancashire she was nominated for the Turner Prize in 1992. In 1999 she was elected to the Royal Academy of Arts and won a Paul Hamlyn award in 2008. Her works of art often employ contrasting materials and combine opposing qualities, hard and soft, masculine and feminine, light and dark.

Traditionally wallpaper was considered mere backdrop. In 2013 wallpaper is everywhere, in corporate and domestic interiors, on the outside as well as inside of buildings and on gallery walls as works of art. Consumers now recognise that the wallpaper in their homes reflects their class, status and cultural affiliations.

The Whitworth’s collection of wallpapers and wallcoverings is internationally significant. This exhibition marks the culmination of a major five-year programme of historic wallpaper acquisitions funded by the Heritage Lottery Fund’s Collecting Cultures scheme. It also includes many wallpapers made by contemporary artists, reflecting the shift in perception about the status of wallpaper, as it becomes artwork.

This exhibition reveals stellar works from the Whitworth’s collection made by leading European artists, and British artists with links to the Continent.

Highlights include exquisitely detailed engravings and woodcuts from the Renaissance by Italian and Northern European artists such as Andrea Mantegna and Albrecht DuÌˆrer; and drawings and prints by Pablo Picasso, including Poverty (1903), a Blue Period watercolour, and The Frugal Meal (1904). This is one of Picasso’s most significant etchings, and the first ever work by Picasso to enter a UK public art collection, when the Whitworth acquired it back in 1922.

Revolutionary Light brings together some of the finest examples of works on paper from the Whitworth’s collection.

The fiery intensity of William Blake’s religious imagery is epitomised in his 1809 series of watercolours, based on Milton’s poem Hymn on the Morning of Christ’s Nativity. In these intricate works, light blasts, beams and glimmers to convey the adoration, majesty and horror within these narratives. Also on display is Blake’s masterpiece in watercolour, The Ancient of Days (c.1827) with the burning disc of the sun at its centre.

Anish Kapoor’s suite of etchings, Blackness from her Womb (2001) glows with a luminosity achieved by contrasting intense colour with deep inky darkness. Inspired by William Blake, these prints address the symbolic, mystical significance of light and dark.

Also on display is a stunning selection of works by JMW Turner. Reported to have uttered the words “the sun is God” shortly before his death, Turner became the master of painting sunlight, harnessing its power and demonstrating its dramatic effect upon the landscape.

The Whitworth maintains its contemporary relevance by acquiring the best work by artists working internationally and in our country. Idle Thoughts by Pavel Büchler, artist and Professor at Manchester Metropolitan University, is one of our most recent acquisitions.

Diaries are written for two reasons – to remember what happened and to get it off our chests and down on paper, unburdened, unchecked and, often, unread.

For a year, Pavel Büchler wrote his diary on twelve pages – all of January 2003 on one page, over and over again for all of its thirty-one days, and repeated this process for every month of the year. These twelve pages were then published and the artist wrote his diary for another year on them – and then these were published, and another diary was written, this process being repeated over several years.

So blue-black with ink that they shine, these self- obliterated diaries tell us nothing through writing, but by becoming drawings make us notice the difference between meaning as word and meaning as image.

Construction reflects on the last major remodelling of the Whitworth Art Gallery building. From 1964 to 1968, the architect John Bickerdike created a new space especially designed to display contemporary works. Now known as the South Gallery, the full- length windows flood the space with natural light and provide views onto the park.

Construction showcases abstract works drawn from the Whitworth’s and Manchester Art Gallery’s collection. Created in the 1960s by innovative, inspirational British artists such as Victor Pasmore, Antony Hill and Kenneth and Mary Martin, these abstract works explore the mathematical principles in nature, combining industrially produced materials with handcrafted techniques. As the Whitworth embarks on a new building phase these artists’ interests in architectural forms, space, light and nature continue to inspire and influence artists and designers.

All the Whitworth’s exhibitions will be open all day and all night for 65 hours during Nikhil Chopra’s performance. Sunrise 4.48am Fri 5 to Sunset 9.37pm Sun 7 July.