Das Reich ohne Mitte (Kingdom without a Middle). The exhibition consists of two parts. On one hand, it shows independent artistic strategies of the present; on the other hand, it endeavours a historical survey of political self-representation in German art since the 19th century. 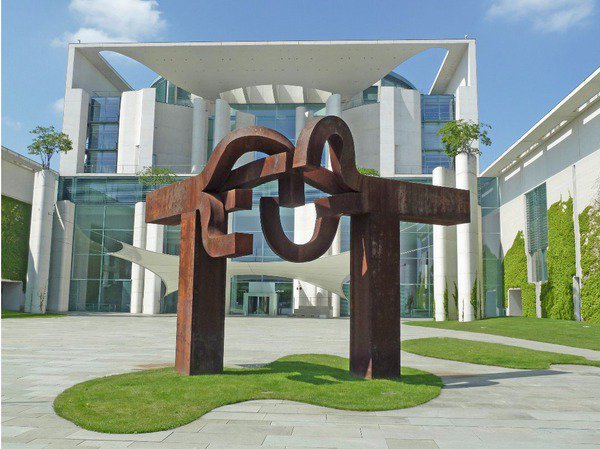 National commonwealths establish pictorial constancy for themselves with symbols of rulers, monuments, allegories and temples. Particularly in the public realm, statues stand for systems of political rule. They mark squares, urban nexuses and mountain ranges visible from afar. Once erected, they serve the purpose of timeless demonstration with an emphasis on irrefutable validity. But what about the depiction of power today? Are statues a democratically tenable form? How does a nation present itself to the public? Where is its middle?

The exhibition takes its thematic point of departure in the Niederwalddenkmal situated near Mainz, a monument consisting of a massive figure of “Germania”. The sculpture was erected on its gigantic base in 1871 immediately following the Franco-Prussian war. Since that time, the personification has looked out over the land as an imperious symbol of victory, visible far and wide. In the exhibition this sculpture is represented by models, plaster sketches and historical photographs. Other images such as Thomas Hobbes’s famous seventeenth-century illustration of “Leviathan” and engravings dating from the French Revolution complete the historical part of the narrative on national self-representation.

The second section of the show is reserved for contempo-rary approaches. Two internationally active artists of the highest rank are featured here. Thomas Schütte’s Vater Staat (Father State) of 2011 is a present-day counterpart to the Germania. Measuring nearly four metres in height, it depicts a grim man wrapped in a heavy cloak. He comes across as a gnarled wise man of incorruptible authority. Danh Vo, a native of Vietnam, exhibits fragments of the American Statue of Liberty in their original size. Executed in copper repoussé, the individual parts are displayed on pallets as symbols of inquiry into the nation in an age of emigration, loss of homeland and globalization.

Leviathan
The 1651 illustration for the book Leviathan depicts a sovereign with a sword and sceptre but without a middle. The English political philosopher Thomas Hobbes commissioned the -Netherlandish engraver Abraham Bosse with the vision that would serve as the book’s frontispiece. The prince of peace rules over secular and religious power. According to Hobbes, human beings would eradicate one another without a system of law and valid supremacy. Under the prince’s protection they live in peace and freedom amidst idyllic meadows, fields and ponds.

Germania
The depiction of the nation as a female figure can be traced back to the French “Marianne”. After the Franco-Prussian war, the German Empire adopted only the gender from its humili-ated neighbour, but not the depiction of the dynamic youthful figure. Sculptor Johannes Schilling’s Germania is a robust, maternal and able-bodied woman. To this day, the monument in Rüdesheim draws some one million visitors every year. One reason for this popularity is the fact that the sculpture illustrates a well-known soldiers’ song: Die Wacht am Rhein (The guard on the Rhine), the signature tune of the weekly newsreels during the Nazi period.

Moore & Chillida
The depiction of supremacy was problematic after World War II. The monumental figural statue was considered a symbol of self-aggrandizement and tyranny. During the modern era and under democratic constitutions, now pathos-charged abstraction was assigned to represent the interests of the state. The Federal Republic of Germany was among the nations to avail itself of this new symbolic language. The two sculptures in front of the Offices of the Federal Chancellor in Bonn and Berlin are similar in appearance. A sculpture by Henry Moore was erected in Bonn in 1977; a steel structure by the Basque artist Eduardo Chillida in Berlin in 2000. In both cases, the interlock-ing forms contrast with the buildings that serve as their backdrops and the lawns forming their cleansed surroundings.

Deimantas Narkevičius
It is difficult to say what country the people assembled in. No commentary accompanies the film. We see a beautiful summer day in the city. A crowd excitedly watches a drama initially not disclosed to us. After a while, an immense base enters the picture. Two Baroque church spires appear in front of the blue sky, then the lower legs of a fragmented figure. A heavy-duty vehicle carries a torso of a Lenin statue in its extendible arm. Cheering is heard. The lorry stops in the middle of the crowd. People climb onto the figure; howling flares up, and enthusiasm. The statue is toppled from its throne. From this moment on, time runs backwards. The film reverses. The crane lifts the metallic torso over the heads of the crowd. Lenin's arm swings as if to greet the people with a gesture of forgiveness. Finally he is once again standing on his feet. The monument's integrity has been restored. Lenin, the sovereign, looks out over his subjects.

The Kunsthalle Mainz will present the exhibition within the framework of the "Kultursommer Rheinland-Pfalz", whose motto this year is "Eurovisionen".