The Center of the World by Jimmie Durham. At the same time in the group exhibition The Nomadic Muse (Collection 06) Works from M HKA are on display in De Kabinetten van De Vleeshal. 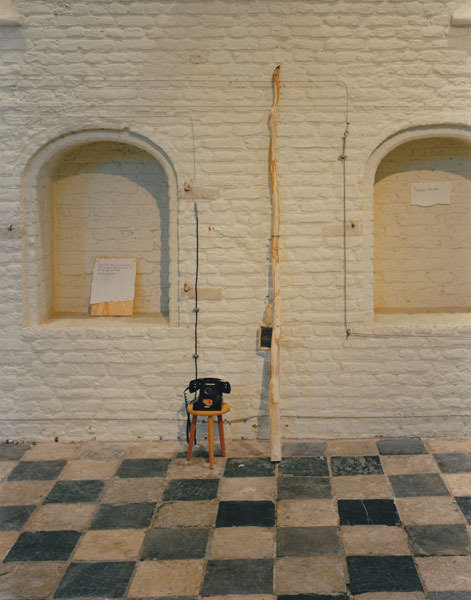 Jimmie Durham, The Center of the World

From 7 July to 15 September the Visual Arts Foundation Middelburg (SBKM / De Vleeshal) will present the collection exhibition The Center of the World van Jimmie Durham (Collection 07) in De Vleeshal.

At the same time in the group exhibition The Nomadic Muse (Collection 06) Works from M HKA will be on display in De Kabinetten van De Vleeshal.

The Middelburg Foundation for Visual Arts (SBKM)/De Vleeshal is in charge of Middelburg’s municipal art collection, which is stored at the Museum of Modern Art in Antwerp. Parts of the collection are periodically on show in a series of exhibitions at De Vleeshal and De Kabinetten van De Vleeshal. In 2011, after a number of retrospective exhibitions, Pipilotti Rist’s work Grossmut begatte mich was on display. In 2012 it was the turn of the recently purchased L’isola by Rossella Biscotti, followed later in the year by Nedko Solakov’s A Quiz (again).

Jimmie Durham (USA 1940) is an artist, activist and writer. He was involved in the American Indian Movement.

In 1995 Jimmie Durham made the exhibition The center of the world for De Vleeshal that was purchased that year.

This summer the SBKM / The Vleeshal and M HKA show works from both collections. The M HKA presents The Collection as a Character whichs includes a loan from the SBKM: Maps and Composite Actions 2001-03 Cameron Jamie.