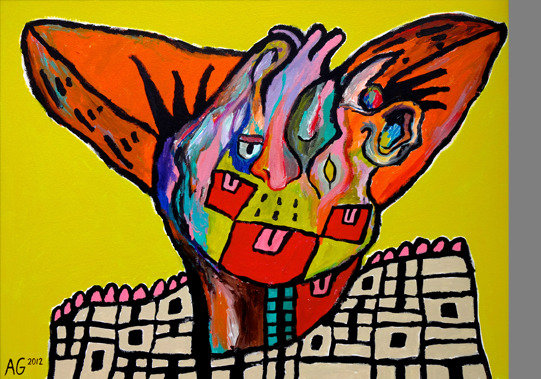 "After a particularly intense drug-hallucination (Salvia), I began to visualize a rich sea of yellow, so rich that I could actually taste it. I took a large piece of foamcore and traced what was inside my mind. That painting, "Bird Godhead" was my first yellow one. I found an ominous feeling in the yellow flesh of big-bird - an ancient mummified cartoon where the yellow seeped in and out from background to foreground. Since then I've been mining his golden skin and pink/blue eyes for digital coins, reconstructing the videogame-like Houseface world into a neoclassical civilization of generals, aristocrats, workers, and ducks."
A. A. Green

Adam Aladdin Green, NYC Having released eight solo albums in ten years Adam Green is already renowned around the globe as one of music’s most unique and prolific songwriting talents. A New York native, Green was just 17-years old when he recorded and released his first album. As part of the downtown antifolk scene at the end of the nineties he made up one-half of The Moldy Peaches, the acclaimed duo with Kimya Dawson that enjoyed belated mainstream success via the Grammy-winning soundtrack of the 2007 Academy Award-winning movie Juno. As a skinny and effervescently articulate teenager he was a regular fixture at East Village music clubs. His poignant and idiosyncratic song writing was matched by a contagious excitement and enthusiasm for his craft. Since then, the former troubadour wunderkind has become a notable figure to indie-pop fans around the world, making regular appearances in arts and culture magazines, television shows, music clubs and festivals.
In Europe he established himself as a bone fide pop star with charts hits like “Jessica”, “Emily” and “Morning After Midnight”. When The Moldy Peaches belatedly found their place at #1 on the Billboard Charts, via the Juno soundtrack, Green had already enjoyed a string of successful albums under his own name and was deep into the creation of his films and visual art.

Recently his almost eruptive bursts of creativity have led him into the world of movies and visual arts, with writing/producing/directing and acting in The Wrong Ferarri,- a feature length “screwball tragedy” shot entirely on the iPhone and starring Macaulay Culkin, Alia Shawkat, Devendra Banhart, Francesco Mandelli, and Sky Ferreira - as well as the staging of four visual art exhibitions in New York City.
While on tour for his album Gemstones in 2005 Green exhibited a series of drawings called Animal Dreams at Loyal Gallery in Stockholm, Sweden. Following his debut NYC art show Teen Tech in 2010 Green became the first artist to show at Dustin Yellin’s Red Hook space, The Intercourse, with his Cartoon And Complaint exhibition. Cartoon And Complaint, inspired by such disparate characters as Garfield and Aladdin, was quickly followed by another solo exhibition, Houseface, at The Hole gallery in downtown NYC in August 2012. Exhibition A released 3 prints from that show in October 2012. Most recently he has formed an art collective 3MB with Macaulay Culkin and Toby Goodshank.
Their first exhibit Leisure Inferno opened at Le Poisson Rouge Gallery in October 2012. Green kicked off 2013 with “Medieval Businessmen,” an exhibit of drawings and paintings at Loyal Gallery in Sweden. In July he will show his visual art for the first time in Italy with “The Yellow Show”, a solo-exhibit at Motel Salieri in Rome.

While creating visual art and film has become a fully realized passion for Green, his boundless energy for creative arts has most recently resulted in a brand new musical project. Adam Green & Binki Shapiro’s debut eponymous album will be released in January 2013. The bi-coastal friendship-turned-musical-partnership is one of tender duets, written by the pair in the wake of coincidentally simultaneous romantic disappointments. His next project will be a film version of the Arabian Nights story "Aladdin," of which he will also compose the soundtrack.

Of his now multifaceted career Green, says: “You know how people are always looking for a unifying theory? I was looking for a unifying theory of artistic expression. I was trying to create some kind of fluidity within my music, art, writing. If you listen to my songs, you see they're kind of cartoonish. I try to make songs like my paintings. When creating my movie, I tried to create more of a song.”