I am I, between worlds and between shadows. The exhibition consists of an installation featuring seven evocative sculptures, each one positioned in one of the rooms of the Ioakimion. 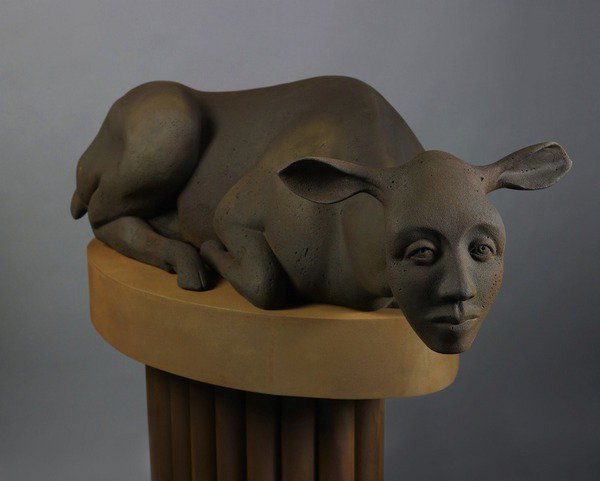 Curated by Beral Madra Kalliopi Lemos’s major solo exhibition “I AM I, BETWEEN WORLDS AND BETWEEN SHADOWS”, will open on 11th September In the Greek Girls School in Fener, founded in 1879 as Ioakimion School for Girls, and abandoned in 1988. The exhibition is curated by leading international curator and critic Beral Madra, and organized on the occasion of the 13th İstanbul Biennale as a parallel exhibition.

During the last decade, the work of artist Kalliopi Lemos has exposed the wounding of human dignity. The majority of her recent international projects have addressed the hardships suffered by thousands of undocumented migrants in their efforts to find a place to live. With her upcoming exhibition in Istanbul, Lemos has turned her attention to the injustices suffered by women in contemporary society. Born in Greece and based in London, Lemos has exhibited all over the world, and consequently her practice exhibits a global perspective, and attempts to address some of the universal problems faced by the human race, and with this new exhibition in particular the problems faced by women.

Gross abuses of women and children have featured heavily in global news recently; from the continued rape and sexual violence against women in war zones, which was recently highlighted by the G8 countries’ decision to fund the battle against sexual violence in conflict situations around the world; to the recent escape of three women held prisoner for 10 years by a man living in a suburb of Ohio, USA; to the schoolgirl paedophile ring recently uncovered in Oxford, England; and the shooting by the Taliban of Pakistani schoolgirl blogger Malala Yousafzai (recently named by TIME Magazine as one of the most influential 100 people in the world), for simply defending her right to an education.

This roll call of maltreatment of women and young girls makes depressing reading, but sadly reflects thenequalities and abuses faced, even in contemporary times. With her captivating half- woman half-animal sculptures representing the multitude of difficulties still faced by the women and girls all over the world, Kalliopi Lemos aims to highlight such injustices, and make the viewer stop and think about the inequalities women still face in today’s society.

Lemos’s new works have to do with the effect that abusive behavior has had on the psyche of women over hundreds of years. The social and political crisis in patriarchal/male-controlled societies remains an unresolved issue. Many of the themes identified in the 1995 Beijing Platform for Action (Women and Poverty, Violence against Women, Women and Armed Conflict, Human Rights of Women, Women and the Media, Women and the Environment, The Girl-child) remain pressing concerns. In many different ways, women still endure behavior that is insulting, wounding, oppressive and overpowering.

With the work that Lemos is presenting in Istanbul this autumn, she points to human dignity as the inner-core of humanity, and the effort of women to uphold it.

The exhibition will consist of an installation featuring seven evocative sculptures, each one positioned in one of the rooms of the Ioakimion, an old girl’s school in the historic area of Fener in Istanbul. The sculptures will stand alone like remote islands, a metaphor for the loneliness experienced after violation. A sound installation will also feature so as to evoke the atmosphere of the old school.

Made of steel fillings, fiberglass and mild steel, the sculptures refer to brutal violations directly or indirectly experienced by women, for example the problem of women who are the victims of human trafficking. However, the story is also of the relatively mundane problems experienced by women in the Western world, such as the struggle to balance being a mother and having a career, or the effect the daily sacrifice of the feminine has on the psyche.

The artist has created part-human, part-animal steel and resin sculptures, reminiscent of familiar mythological figures, some on pedestals or crutches, and others hanging from the ceiling like a hunting trophy, and diverting our attention to our common primeval origins as well as the psychoanalytical perspective of mythology. These hybrid characters are imagined to be the natural copulation of human and animal bodies, heads and limbs; they are beings on a threshold, caught between two states or natures. Now we see these characters in a building, a school once full of children of Greek families in Istanbul, now laden with traumatic recollections as metaphors of memories of liminal people.

“I Am I Between Worlds and Between Shadows” is a representation of some of the unspeakable experiences of women and children, and the abuse of their bodies and self- respect. Kalliopi Lemos commented: I believe that human dignity is an inherent quality and an essential part of every human being that can never be separated from other characteristics of the person. Through time women have come to face and often accept behaviour of the social body that is insulting, wounding, suppressing and dominating and children have been exposed to a multitude of evil. Through this installation Lemos points to this inner core of humanity and the effort of women and children to uphold it.

This exhibition is an attempt to transcend the deadening global saturation of images, and demonstrate the lasting power of the imagination to create resonant, visceral images, that speak directly to the heart of the viewer, and aim to reach the core of social malaise. Lemos delves into a world of alchemy, mythology, dream and illusion to conjure up figures that force us to engage with and re-evaluate our understanding of the world, of how it is represented to us, and of women’s place within it.

Lemos‘s projects, since 2006 were intended to raise awareness on the ongoing illegal immigration from Turkey to Greece and to EU countries. In view of that, Kalliopi Lemos found in Istanbul a logical ground for her ongoing project, which started with the exhibition of abandoned boats in Elefsina (2006-2009). In 2007, Round Voyage, the second installation with boats was presented in Istanbul and is now on permanent display at Istanbul Bilgi University on the Golden Horn. In 2009 the third majestic installation with four boats was presented to international audiences in Berlin in front of Brandenburg Gate, and stirred a strong public opinion. The last installation, a boat covered with more than 1000 votives made of drink cans, and engraved with the names of illegal immigrants who reached the shores of Greece, was created for the 3rd Çanakkale Biennale and donated to the Çanakkale people.

The Curator Beral Madra commented: Kalliopi Lemos's exhibition, with seven bronze sculptures and a sound installation, finds a reciprocal space in the abandoned Ioakimion Greek school for girls, and is constructed on the post-humanistic discourse that emphasizes the appreciation of identity, marked by the indelible position of the “other” as a determining identity. The exhibition undoubtedly aims to generate awareness among art professionals, open a public discussion by engaging the local and international community of Istanbul, and promote public participation in the realities, which are only revealed in numbers in the press and media.