A Life of Illusions. The artist has reconstructed scenes from four previous figurative sculptural ensembles and drawings made since 2003. Life-sized figures whose semi-realistic arrangements are constantly undermined by violent colours and quasi-grotesque expressions on the borderline of being inhuman. 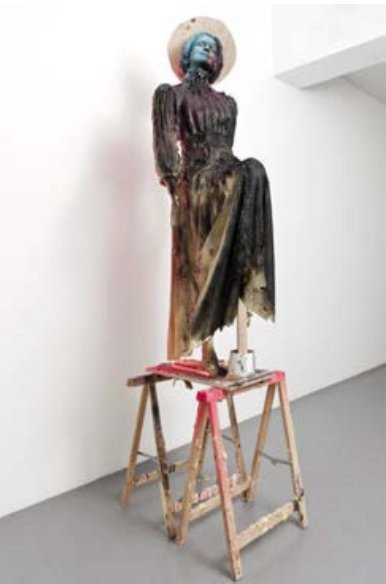 This summer Rochechouart Museum of Contemporary Art presents the first exhibition in a French museum by Dutch artist Folkert de Jong. His famous life-size sculptures will be shown in the castle's wood-beamed top floor gallery space.

Folkert de Jong (b. 1972) lives and works in Amsterdam. Over the last 15 years he has gained a reputation for his dramatic sets of sculptures that combine grotesque and monumental features. The polystyrene foam figures tinted with bright colours, are assembled in scenes that despite references to historical sculptures, remain difficult to situate with their mutated and anarchic punk forms. Misappropriating industrial polyurethane and polystyrene foam plastic, Folkert de Jong manages to express a whole gamut of human emotions in work that is varied yet never entirely what it seems to be. However ephemeral and frothy his sculptures appear, the plastic he uses is tragically neither biodegradable nor recyclable but paradoxically, far more permanent than traditional bronze.

For Rochechouart Museum's exhibition "Folkert de Jong. Une vie d’illusions", the artist has reconstructed scenes from four previous figurative sculptural ensembles and drawings made since 2003. Spectators are confronted head-on with life-sized figures whose semi-realistic arrangements are constantly undermined by violent colours and quasi-grotesque expressions on the borderline of being inhuman. The result is strangely compelling and disturbing, like a fairground distorting mirror reflecting the world around us. Inspired by Picasso's "Saltimbanques" which he reinterpreted in 2007, the street entertainer's laughter is tinged with sadness and the whole carnival atmosphere oscillates between joy and tears, comedy and tragedy – life and life's accomplishments being nothing but an illusion.

Folkert de Jong's work has been shown in many places around the world over the last few years including a major retrospective at the Groninger Museum (Netherlands, 2009) and a one-man show in the Mackintosh Museum at Glasgow's School of Art (Scotland, 2012). In France, he participated in the Lille 3000 "Fantastic 2012" exhibition last winter and currently, many of his works can be seen at the Portland Art Museum, Oregon, USA (5th January - 23rd June, 2013) and at the Museum of Modern Art (MUDAM) in Luxembourg ("Actus Tragicus", 23rd March 2012 - 8th September 2013).

Inverse and Los Fantasmas (Phantoms) created by Eduardo T. Basualdo (b. 1977) for his show "Nervio" at Rochechouart Museum last Spring will be on display until 15 th September 2013.
A dark streak of surrealism runs through many of the Argentinian artist's mysterious works that are steeped in theatre, literary and psychoanalysis roots.
Recurring themes such as ambiguity of natural forms and the impact of physical forces often coalesce. Visitors are confronted with the physical presence of a gigantic black rock (Inverse), are allowed to enter and leave a cell Los Fantasmas (Phantoms). A trilingual catalog (French, English, Spanish) edited by Annabelle Teneze and co- published with editions Analogues (Arles) is the first monograph on the artist.

Through the lens of portraiture, the exhibition will explore the diversity of the Dadaist Raoul Hausmann’s artistic practices - paintings, photographs, drawings, collages and photomontages . It will as well focus on his friendships, and his relation to the body and the performance.