Labour and Wait explores the ideals of labor and craftsmanship in contemporary art, and, the pathology of such practices -from historic phenomena, political activism, and spiritual will to contemporary viewpoints and market economies. Un/Natural Color - Shifts in Time, Shifts in Color, presents photography from the Permanent Collection. 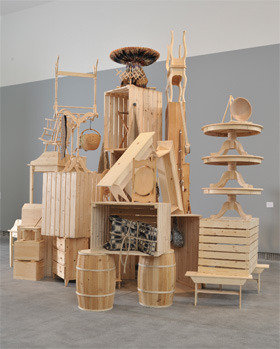 Labour and Wait explores the ideals of labor and craftsmanship in contemporary art, and, the pathology of such practices—from historic phenomena, political activism, and spiritual will to contemporary viewpoints and market economies. Emphasized are works that illustrate current-day representations of the analog, exemplified through tropes found in pre-industrial processes, ideals in Romantic literature, and constructs representing mysticism. Are such works viable in today's world? Are such tendencies an action or a reaction to technological progress? These questions and more are explored throughout the exhibition, catalogue, and related public programs.

The exhibition features approximately 15 artists/artist collaboratives, many whom have not exhibited before in Southern California museums. Highlights of the exhibition include Peter Fischli and David Weiss's seminal film The Way Things Go (1987), contextualized in a way that emphasizes its vitality as a critique on labor, time, and product. Wim Delvoye, another progenitor of this group, is represented by his "Delft" series (1980s), illustrating the merging of craft, romanticism, and technology. Works by David Thorpe demonstrate utopian ideals of the spiritual harmony of work. Several hand-painted ceramic vessels and a large tapestry by Grayson Perry, who has called craftsmen "the product of collective belief system," are also featured. Also crucial to the project are works by emerging artists such as a film installation by Mika Rottenberg, and another produced with the artist Jon Kessler, which peculiarly and poignantly explore human labor and value by combining fantasy with an absurd sense of futility.

Tim Hawkinson's work speaks to multiple consequences of the exhibition theme, demonstrated in multimedia works constructed from unlikely materials and an unimaginable amount of handiwork. Josiah McElheny creates finely crafted glass objects, many of which he learned to create through the result of an extended apprenticeship with a master glassblower. His carefully arranged displays speak to the history of craft and its relationship to major historical movements in art and design, but also to notions of meaning and memory. Theaster Gates's poetic objects employ or "reclaim" objects or remnants that bear the social and political impact of their use.

Colin Darke is represented by his magnum opus work, The Capital Paintings (2007), a group of 480 paintings that serve as a reinterpretation of his earlier work that translated into text and imagery the initial three volumes of Marx's influential tome Capital (1867–1894). Andrea Bowers explores the realms between art and social activism, and is represented by large and small drawings related to recent and historic labor protests. Allison Smith addresses American colonial and Civil War histories in her large-scale installation titled Stockpile (2011-13). Jane Wilbraham's recent sculptures are exhibited for the first time in a United States museum, including (The long arm of) Captain Swing (2010), referencing the historic English Swing Riots of 1930.

Other artists include Ricky Swallow, whose wood sculptures create a dialogue between personal and public iconography as well as the permanent and ephemeral. Daniel Dewar and Grégory Gicquel take their investigations into hand-crafted materials and processes to a level that some may consider extreme, realizing from scratch works that include traditional stone carving, tapestry weaving, and clay and porcelain techniques. Tonico Lemos Auad's crocheted chandeliers address in a prescient and contemporary way the spiritual aspects of craft and artmaking.

Also featured is an array of programs for adults and children, including the result of a special commission with exhibition artist Allison Smith that activates the Museum's Family Resource Center, a lecture by scholars Julia Bryan-Wilson and Jenni Sorkin, and a special lecture by exhibition artist Grayson Perry.

Un/Natural Color
Shifts in Time, Shifts in Color— Photography from the Permanent Collection

This exhibition looks at the powerful relationship between color and memory by considering photographs and the ways in which their unique color palettes evoke specific moments of the historical past. From the pastel hues of 19th-century hand-painted portraits, to the vibrant colors of late-1930s Kodachrome transparencies, and the faded, shifted tones of snapshots from the 1970s, different kinds of color reproduction are closely associated with the time periods that they most frequently represent.
Each experiment in color photography was originally meant to convey a sense of the natural hues of the world, but as our expectations for realistic representation have evolved, these earlier technologies for representing color have also taken on new meaning. Today, the distinctive colors found in many vintage photographs speak as loudly to contemporary viewers about the period in which they were made as the content that they render visible. The exhibition suggests that the aesthetics of color are closely related to the evolution of photographic technology over the past 100 years, and encourages visitors to rethink the significance of color in contemporary photography through the lens of its multi-colored past.
This exhibition was organized by Kim Beil, an art historian who teaches at the University of California, Santa Cruz.