Inspired by the work of the German writer W. G. Sebald, the exhibition L'Image papillon addresses the complex relations that link image and memory. It gathers together 16 artists whose work explores the concepts of experience and overlapping temporalities. The 3D pictures by Folkert de Jong appear seductive and disturbing in equal measure. The Mudam Collection presents installations by Art Oriente' Objet and Katinka Bock. 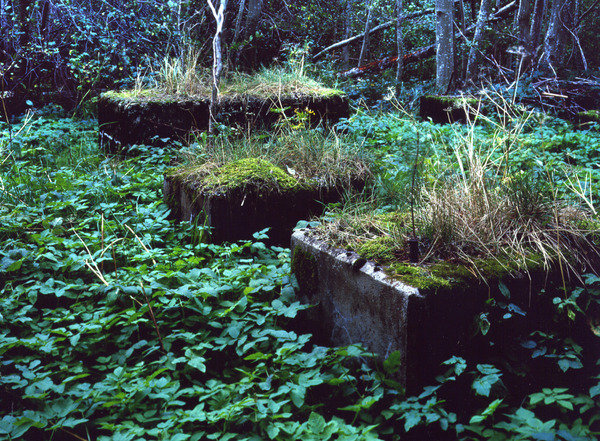 Inspired by the work of the German writer W. G. Sebald, the exhibition L’Image papillon (The Butterfly Image) addresses the complex relations that link image and memory. It gathers together sixteen artists whose work, like Sebald’s, explores the realms of memory and history through the concepts of experience and overlapping temporalities.

Borrowing its title from a recent essay on Sebald’s work by the writer and literary researcher Muriel Pic, the exhibition uses the figure of the ‘butterfly image’ to examine the questions this kind of relation to the past asks in the context of the visual arts. Tracing its recurrence in Sebald’s books, Pic considers the butterfly as the allegorical image of a dialectical relation to memory – on the one hand the scientific gesture of collecting and archiving, in which the past is frozen or ‘pinned down’, and on the other hand a more emphatic relation to the past, which sees memory as the place of experience, of an ‘observation of the past as movement’. Or as Pic describes it, ‘we follow the memory with the gaze, it twirls like a butterfly.’

One of the characteristics of the four works of fiction Sebald published between 1990 and 2001 – Vertigo, The Emigrants, The Rings of Saturn and Austerlitz – is the presence, in the main body of the text, of uncaptioned black-and-white images of mostly imprecise origin and nature, which act like memories punctuating the narrative as it unfolds. Similar to these images, the works in this exhibition explore different possibilities to materialise the images of the past in the realm of experience. They share several key motifs of Sebald’s books, including the crossing of temporalities, a sensible relation to documents and archives, the interweaving of personal and collective history, destruction, the fragment and the trace.

The exhibition takes the shape of fifteen monographic presentations, each comprising a group of works or a large-scale installation and introduced by an image from Sebald’s books. Through the connections they establish with the works on display, these images attempt to emulate two modes of relation that lie at the heart of Sebald’s writing – montage and coincidence – in the exhibition.

At first glance, the three-dimensional pictures by the Dutch artist Folkert de Jong appear seductive and disturbing in equal measure. De Jong generally turns the exhibition space into a theatre stage, for which he designs sceneries made, with great virtuosity, from polyurethane foam, an unusual material in sculpture. Often inspired by historic facts, real persons or memorable episodes from art history, his works unfold in complex compositions that confront the viewer with extremely tangible directness.

In response to an invitation from Mudam, de Jong presents Actus Tragicus, an ensemble of new works that he has created especially for the Grand Hall. For the artist, this central space in the museum possesses the intimidating dominance of a cathedral or mausoleum, while also being perfect for theatrical presentations, with a balcony to observe from a distance. Ten larger than life figures, whose physiognomies, like a déjà-vu experience, remind the viewer of something familiar, dangle from the heights of the glass dome like marionettes (or hanged people). De Jong's source of inspiration for this bizarre dance of the figures, between which viewers have to make their way as if they were part of the performance, is the painting The Fight Between Carnival and Lent by Pieter Bruegel the Elder, painted in 1559. A crude mixture of allegory and realism, this crowd scene in the typical Bruegel manner contrasts vice and excess with virtue and abstinence in innumerable individual scenes.

The conflict between the extremes of human existence, between ascetic discipline and intemperate pleasure, which comprehends some of the existential questions of humankind that is torn between heaven and earth, is also the focus of de Jong's installation. From time immemorial, people have sought answers to questions regarding power and religion, eternity and finiteness, life and death. These questions are also evoked by Actus Tragicus, as in the early funeral cantata by Johann Sebastian Bach, also known under the title Gottes Zeit ist die allerbeste Zeit (God’s time is the very best time), that gives the work its name. Brought into a contemporary form using modern means and materials, the round dance of the figures involves the viewers in a drama to which each contributes with his or her own role. In this way, de Jong creates a tableau vivant in which the grotesque and the macabre alternate with the light and the airy.

Folkert de Jong was born in 1972 in Egmond aan Zee, Netherlands. He lives and works in Amsterdam.

Unrooted Tree (Arbre sans racines) ou la Machine à faire parler les arbres was conceived in 2009 during a trip to Cameroon in mountainous forests exploited by a certified company, where only the tree trunks are usually exploited while the branch parts are left on site. From the remains of a felled giant tropical tree, the artists recomposed a new tree on which they carved the various stages of phylogenesis, the developing history of all species. At their extremity, many of them are sculpted into a bike fork to which is fixed a wheel with spokes bearing enigmatic phrases related to the 360 degree Sabians, short symbolic astrological formulae which, segmenting the zodiac signs, serve to nuance predictions. Art Orienté Objet’s work can be interpreted as a poetic-melancholic metaphor for the mysterious relationship between microcosm and macrocosm, and can be activated by the artists during performances, in which the tree answers the visitors' questions.

Art Orienté Objet is an artistic duo formed in 1991 in Paris by Benoît Mangin and Marion Laval-Jeantet.

Katinka Bock activates spaces by setting materials and forms in relation to one another in an extremely subtle manner. With a sharply bordered, paper-thin area of sand and the solid body of a wooden stele of anthropomorphous appearance, she generates a silent landscape that is given a narrative undertone by the title Atlantic, Personne (2012).

Katinka Bock was born in 1976 in Germany. She lives and works in France.