In the Tower. His work explores the narratives of American history that have often excluded black people. Drawing upon the artist's prodigious knowledge of art history and the African diaspora, his paintings combine figurative and abstract styles and multiple allusions, drawing from 'high' and 'low' sources. 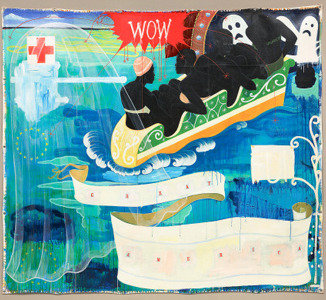 This summer the National Gallery of Art hosts the city's first solo exhibition of the work of American artist Kerry James Marshall. On view from June 28 through December 7, 2013, In the Tower: Kerry James Marshall presents 10 paintings and more than 20 works on paper, affording a context for understanding the Gallery’s own Marshall painting, Great America (1994), and its powerful imagery. As a group, these paintings evoke the Middle Passage of slave ships between West Africa and North America, and the themes of immigration, class mobility, and aspiration central to American life.

"Kerry James Marshall is one of the most exciting and celebrated painters currently working in the United States. His art is a reflection on African American history and the reverberations of the past in contemporary life," said Earl A. Powell III, director, National Gallery of Art, Washington. "We are honored to host the first solo exhibition of his work in Washington, and we are grateful to lenders, both public and private, for parting with their works for several months."

This exhibition is sponsored by Dr. Anita Blanchard and Martin Nesbitt and Cari and Michael Sacks. Additional support is provided by The Tower Project of the National Gallery of Art.

In the Tower: Kerry James Marshall was conceived following the 2011 purchase of Great America by the Gallery’s Collectors Committee. This painting is the centerpiece of the exhibition, which brings together a sequence of related paintings and drawings to explore important themes and imagery woven throughout Marshall’s work. Great America depicts two couples in a small boat exiting an amusement park Tunnel of Love ride. Named for an amusement park that Marshall visited as a child, this seemingly innocent scene of middle-class leisure is filled with troubling details, such as the appearance of ghosts in the dark tunnel, the bobbing head of a man in the water, and an abstract shape, painted in thick brushstrokes, pointing at a woman's head like a rifle.

Great America is one of several works by Marshall to depict human beings and water. The sailboat named Wanderer in Voyager (1992) recalls the last documented slave ship, which set sail from the Congo and landed in Jekyll Island, Georgia, in 1858. In Baptist (1992), a figure treads water in the ocean between Africa and North America, while in Plunge (1992), a woman jumps into a pool identified as the Atlantic Ocean. A toy boat floats in the water; the flagstone patio and white picket fence locate the scene in a contemporary suburb. While the gate at the entrance to the pool is painted PRIVATE, it is unclear if the diver resides inside this private space—or has been excluded from it.

The enormous The Gulf Stream (2003) was inspired by Winslow Homer’s famous painting of a black man on a shipwreck surrounded by sharks (1899, The Metropolitan Museum of Art). In contrast to Homer’s doomed survivor, Marshall’s middle-class family enjoys a leisurely sail on the open sea as gray clouds gather on the horizon.

In Bang (1994), an image of the Fourth of July, a girl holds up the American flag while two boys say the Pledge of Allegiance in a neighborhood of white clapboard houses and picket fences. Two doves hold up a Revolutionary War banner (“Resistance to tyranny is obedience to god”), while the text “We Are One” from the Great Seal of the United States is painted below. Yet the round-topped Weber grill emits a coil of black smoke, and a garden hose—suggestive of the water hoses used against the children who marched for civil rights in Birmingham, Alabama, in 1963—encircles the girl like a snake.

In Our Town (1995), a boy rides a bicycle. A girl accompanied by a dog runs beside him as their mother waves farewell from a distance. The prosperous neighborhood of large houses and swimming pools is splattered with abstract brushstrokes and drips of paint.

Other paintings drawn from museum and private collections from around the United States include Nat Turner with the Head of His Master (2011), a painting in the old-master tradition of images of freedom fighters (including the Gallery’s painting by Andrea del Castagno, David with the Head of Goliath, 1450/1455), and the maquettes for Marshall’s 2008 celebrated pair of frescoes at the San Francisco Museum of Modern Art that portray President Washington at Mount Vernon and President Jefferson at Monticello, respectively. The exhibition also includes more than 20 preparatory drawings for many of these works.

Kerry James Marshall
Born in 1955 in Birmingham, Kerry James Marshall moved with his family to Watts, Los Angeles, in 1963. He was educated at Otis Art Institute in Los Angeles and currently lives in Chicago. Marshall is the recipient of a MacArthur Fellowship, an NEA Visual Art Fellowship, and many other awards. He has had one-person exhibitions at the Museum of Contemporary Art, Chicago; the Wexner Center for the Arts, Columbus; the Vancouver Art Gallery; the Renaissance Society in Chicago; and the Vienna Secession.

The exhibition curator is James Meyer, associate curator in the department of modern art at the National Gallery of Art.

A fully illustrated brochure featuring an interview with the artist will be available in the exhibition.

Meyer and Marshall will discuss the artist's work on Wednesday, June 26, at 3:30 p.m. in the East Building Auditorium. The event is free of charge and seating is available on a first-come, first-seated basis.

National Gallery of Art
2000B South Club Drive Landover, MD 20785
The National Gallery of Art and its Sculpture Garden are at all times free to the public. They are located on the National Mall between 3rd and 9th Streets at Constitution Avenue NW, and are open Monday through Saturday from 10:00 a.m. to 5:00 p.m. and Sunday from 11:00 a.m. to 6:00 p.m. The Gallery is closed on December 25 and January 1. With the exception of the atrium and library, the galleries in the East Building will be closing gradually beginning in July 2013 and will remain closed for approximately three years for Master Facilities Plan and renovations.