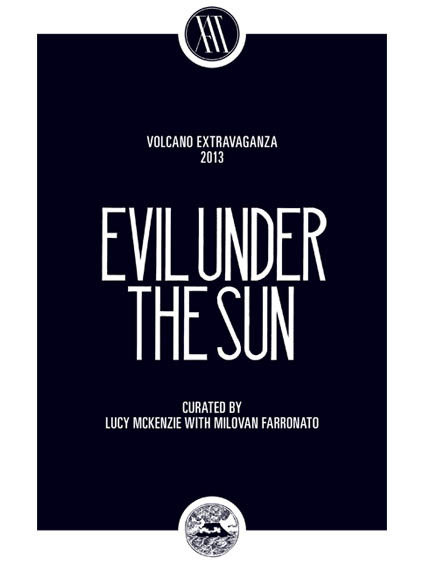 This year’s programme of events at Volcano Extravaganza on Stromboli takes its inspiration from the 1982 film adaption of Agatha Christie’s novel Evil Under the Sun. In this film the formula of the whodunit is used to full effect: an ensemble cast, including a murderer, a victim and a detective, gather on a private island in the Adriatic to enact the narratives that are Christie’s stock in trade. The setting of bourgeois interplay against a backdrop of exotic foliage is a familiar one, and can take any number of forms, from the Gettys in Marrakesh, to the more subtle and conflicting scenarios we find in the writings of JG Ballard or Margeurite Duras. Like anywhere characterised by remarkable natural landscape, Stromboli evokes both sensuality and malevolence to those who seek it. It is a place ideal for both total relaxation and intense social chemistry. Not surprisingly, it is in this area of Italy where Tom Ripley served his apprenticeship as a confidence trickster, social climber and murderer.

But aside from the drama, and with a midsummer seaside weekend in mind, we will supply the beachwear, the paperback page-turner, and the scent of the season. A series of informative lectures on subjects ranging from public sculpture to James Bond will be presented to the public for their entertainment, as will be film screenings, exhibitions, dance, music and performance art at the House of Extravaganza and other locations on the island. In the semi-seclusion of La Lunatica, a changing group of practitioners at the top of their game, and with the sharpest of practical and theoretical skills, will explore the points where fine art encounters design, abstraction and narrative, and where fact and fiction become intertwined.