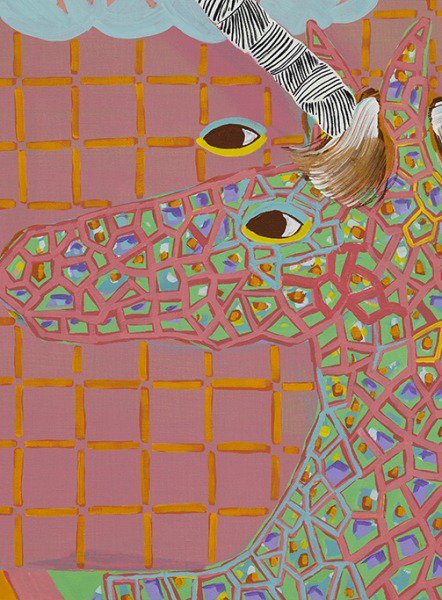 In a maze of scaffolding conceived by the artist, Cynthia Girard installs her most recent paintings, banners, sculptures and other objects for To My Friends the Unicorns.

To My Friends the Unicorns

And to the Marquis de Sade,

In the country, I groom horses; while in the city, hoards of angry citizens revolt and take to the streets.

Back at the studio, I am not free: I have been captured by unicorns. Imaginary and utopic animals, idols of little girls and virgins, the unicorns order me to brush them; I am their prisoner. My studio is their stable. Their coats and manes rendered, they still want more. To excite them, I paint some dictators. Their horns grow very hard and pointy. Satisfied, they set me free. I am now a bird. My dreams are winged horses, and a revolutionary sun smiles at me while Madame La Richesse, disappointed, lifts her skirt and licks her thin and salacious lips.

The bird springs onto a branch and swallows a fruit.

The unicorn frolics, then rests her head on the calloused knees of utopia.

Girard has invited Julie Doucet, Henry Kleine, David Altmejd and Groupe Épopée to contribute their work to the exhibition.

Cynthia Girard holds a Master's degree in Fine Arts from Goldsmiths College (London), and teaches visual arts at UQAM (in Montréal, Québec). She presented Fictions sylvestres, a solo exhibition at the Montréal Museum of Contemporary Art in 2005, and participated in the inaugural Quebec Triennial in 2008. Girard has participated in international artist residencies in London and Berlin and her work is found in the collections of the Montréal Museum of Contemporary Art, the Canadian Ministry of Foreign Affairs, as well as many private collections.

Alexandre David presents L'un sur l'autre— an architectural intervention that interacts with the particularity of PARISIAN LAUNDRY's bunker space. The work provokes a reflection on one's own movement and the movement of others throughout the space. This monumental structure is the result of an in-situ construction that destabilizes our notions of inhabiting built environments.

"I am not thinking of any use in particular for this project. What can one do in such a space? Everyone will make use of it as they see fit, but everyone will have in mind the movements executed by their counterparts, as they inhabit the space. One cannot list all the possible ways to make use of space, and how these may be manifested and repeated, but the illimitation of usages suggests an experience that cannot be reduced to manipulations, gestures and movements that one can accomplish here. The point is not to conjure an account of the imagined and actual displacements enacted by oneself and others but to think of their virtual encounter at any moment. In this sense, the project 'becomes' through common and shared use, either as a solitary or group experience."

Alexandre David holds a master's degree from the Slade School of Art (London), and his work has been exhibited in museums and galleries across Canada, the United Kingdom, the Netherlands, Switzerland and France. He has participated in artist residencies at Les Récollets in Paris, YYZ in Toronto and La Chambre Blanche in Québec. The work of Alexandre David is found in public collections such as the MacLaren Art Centre in Barrie, Ontario and the City of Montréal, as well as various private collections.
dotted_line