The presentation highlights the most recent evolution of process in Whitten's 50-year career dedicated to abstraction, manipulation, and subversion of traditional painting practices. 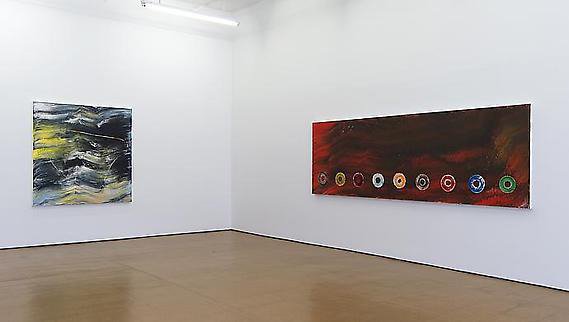 Alexander Gray Associates is pleased to present an exhibition featuring new paintings by Jack Whitten, accompanied by a fully-illustrated catalog. The presentation highlights the most recent evolution of process in Whitten’s nearly 50-year career dedicated to abstraction, manipulation, and subversion of traditional painting practices.

Scale, context, and history play equally integral roles in the group of paintings on view. With its alluring, slick black surface, the sprawling Remote Control (2013) is both seductive and intimidating, alluding to the appeal and threat of technology. In the massive Crushed Grid (2013), Whitten reinvents the modernist grid by immersing a distorted net of acrylic ribbons in thick layers of undulating paint. The varied effects of his material experimentation add a sense of tension, depth, and motion; the result is an array of illusory surface textures that seem solid and aerated, dense and viscous yet fluid.

The memorial and homage paintings in the exhibition further exemplify Whitten’s innovative consideration of painting as object. Elements of three-dimensionality are applied to the canvas, such as the acrylic molds in Nine Cosmic CDs: For The Firespitter (Jayne Cortez) (2013). The radiant energy captured by Whitten’s vivid palette provides insight into the fierce personality and artistic achievements of the late poet who inspired the painting.

About his recent work Whitten states, ''I like the idea that people are suspended while asking questions about process. I like the idea that the viewer might be frozen by wonder. I have developed many conceptual and technical approaches over the past 50 years, and now, all I’m doing is going back into my toolbox and using them. I am dealing with the evolution of painting, Western abstract painting in particular. In this way, evolution is the symbol I am trying to capture. That’s why each work is so different, it is still in the act of evolving."

Alexander Gray Associates is a contemporary art gallery in New York. The Gallery presents exhibitions focused on artists who emerged in the 1960s, 1970s, and 1980s. Influential in political, social and cultural spheres, these artists are notable for creating work that crosses geographic borders, generational contexts and artistic disciplines. Alexander Gray Associates is a member of the Art Dealers Association of America.