A is Building, B is Architecture. Through drawing, sculpture, video and performance, Bronstein explores the links between classical architecture and contemporary urbanism, settings and decors, art and dance. 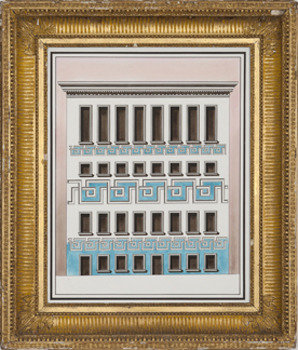 The Centre d'Art Contemporain Genève is pleased to present the first solo show of Pablo Bronstein in Switzerland and the first retrospective of his architectural drawings.

Through drawing, sculpture, video and performance, Pablo Bronstein explores the links between classical architecture and contemporary urbanism, settings and decors, art and dance. His work often combines references to the history of architecture—from Roman antiquity and the Baroque to Neo-Classicism and Post-Modernism, as well as to the history of art—from the Renaissance to the Modern period.

In his architectural interventions, Bronstein explores the relation between architecture and our urban lifestyles. His drawings are neither architectural works, nor sketches for decors but rather concepts in themselves, which involve a relation to the human being and to its personal identity and social customs.

The exhibition at the Centre d'Art Contemporain Genève invites the public to discover an artwork in which history and contemporaneity become entangled, and that questions and challenges the spaces where it is displayed. Architectural models play an important dimension in Bronstein's work and will be an integral part of the exhibition at the Centre. On view on the second floor will be a large-scale architecture installation:

"Two identical very long and low buildings sit next to each other, occupying the entire length of the room. The extreme length (18 m), low height (200 cm) and narrowness is indicative of transitional space—corridors, alleyways, spaces between buildings...The piece is a continuation of my interest in Enlightenment, views of architecture and archaeology. The 18th century was obsessively asking itself what the first building looked like, what function did it have. My twin buildings try to answer that question, but from a point of view that looks back onto the 18th century rather than prehistory. The idea that my work is trying to express is that 'architecture,' as opposed to a 'building,' appears when there is a repeated structure, because it implies excess beyond necessity. The vernacular tradition builds what is needed."
–Excerpt from the interview with Pablo Bronstein by Andrea Bellini published in the catalogue accompanying the exhibition

His books Postmodern Architecture in London (2007), Ornamental Designs (2008), and Gilded Keyholes (2013) have been published by König Books.

The exhibition will be accompanied by a comprehensive catalogue published by Walther König, with essays by Catherine Wood (Tate Modern, London), Sam Jacob (FAT architecture) and an interview with the artist by Andrea Bellini.

Pablo Bronstein will also present a newly conceived performance titled Intermezzo: Two girls wear fashion garments on a palm tree on the High Line in New York City, on September 18 and 19. This project, curated by Cecilia Alemani, is commissioned by High Line Art, the public art program presented by Friends of the High Line.