The Veneration of Saint Mamas in the Mediterranean

A traveller, border defender Saint. Thee exhibition presents the broad dissemination of Saint Mamas, which until today remains alive among different peoples across the Mediterranean. Artifacts from Greece and Cyprus, but also rich photographic material cover a period from the 6th c. to our time. 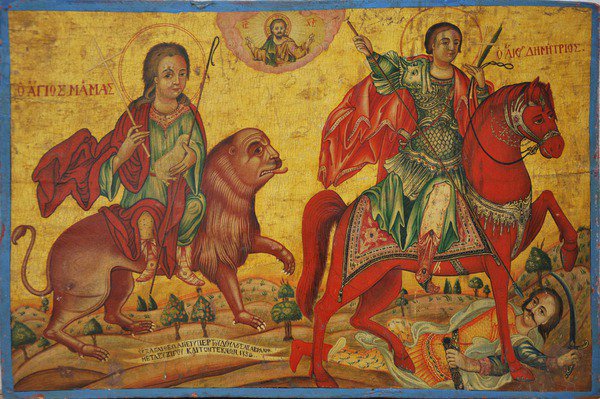 The Museum of Byzantine Culture in collaboration with the Holy Bishopric and the Municipality of Morphou, Cyprus participates in the events of Thessalonikis 4th Biennale of Contemporary Art with the exhibition The veneration of Saint Mamas in the Mediterranean, realized within the framework of the 5 Museums Movement in Thessaloniki(5M).

For the first time, the exhibition presents the broad dissemination of Saint Mamas, which until today remains alive among different peoples across the Mediterranean. Artifacts from Greece and Cyprus, but also rich photographic material cover a period from the 6th c. to our time.

Initially, the exhibition traces the identity of the saint, martyred in Caesarea during the years of the Emperor Aurelianus (270-275 a.D.), as well as the origin of the iconographic type as a shepherd boy. The main part of the exhibition focuses on the diffusion of Saint Mamas veneration in Cyprus, Constantinople, Eastern Mediterranean and Greece. A special reference is made to the relation between Mamas and Demetrius, patron-saint of Thessaloniki, highlighting their healing and myrrh-streaming powers. The exhibition ends with the diffusion of the saints veneration in the medieval West.

Through churches, wall-paintings, icons, objects of metalwork, religious fairs and place names a common tradition is displayed, a tradition that survives in several parts of the Mediterranean. The exhibits and the photographic material come from the collections of the Museum of Byzantine Culture, public museums, private collections and Ephorates of Antiquities around Greece, as well from museums and churches of Cyprus.

Museum of Byzantine Culture
2 Stratou Avenue, Thessaloniki 546 40, Greece
Opening hours
Tuesday-Sunday 08.00-20.00
Monday 13.00 -20.00
Winter time programme (from 1 November to 31 March)
Monday-Sunday: 08.00-15.00
Summer time programme (from 1 April to 31 October)
Monday: 13.30-20.00
Tuesday-Sunday: 08.00-20.00
The Museum of Byzantine Culture is closed on 25 - 26 December, 1 January, 25 March, Orthodox Easter Sunday and 1 May.
Entrance fee
Admission fee: 4 euros
Reduced fee: 2 euros for E.U. senior citizens (over 65 years old), students from countries outside the E.U.
Free entrance: visitors under 19 years old, students from E.U. countries, admission card holders (Free Entrance Card, Culture Card, ICOM, ICOMOS), journalists, guides, soldiers.
Entrance is free to all visitors on the following days:
· 6 March (Memory of Melina Mercouri)
· 18 April (International Monument Day)
· 18 May (International Museum Day)
· 5 June (World Environment Day)
· the last weekend of September (European Days of Cultural Heritage)
· every Sunday of from November 1st to 31st of March
· the first Sunday of April, May, June, September and October (in case this is an official holiday, it is the second Sunday of that month).
· Greek official holidays during which the Museum remains open: 6 January, Orthodox Good Friday (12:00 - 15:00), Orthodox Easter Saturday and Monday, Orthodox Monday of the Holy Spirit, 15 August, 28 October.
Entrance is free on the days celebrating Open Days and the European Spring of the Museums according to the dates set each year.