Lived, Lives, Will Live! Reinvigorating a once famous Leninist slogan, the group's new works are part of a larger practice exploring the relationships between politics, celebrity culture, and collective histories. 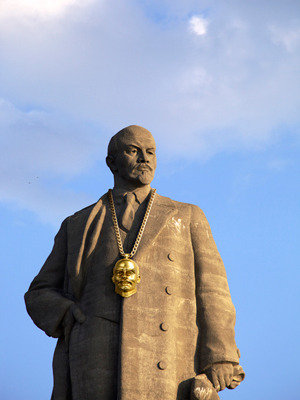 Ho Chi Minh City and Los Angeles-based collective The Propeller Group—formed by Phunam, Matt Lucero, and Tuan Andrew Nguyen in 2006—will open their debut solo exhibition in the United States at Lombard Freid. Reinvigorating a once famous Leninist slogan, Lived, Lives, Will Live!, the group’s new works are part of a larger practice exploring the relationships between politics, celebrity culture, and collective histories. Following close on the heels of the media frenzy surrounding Jay Z’s now infamous “Picasso Baby” performance, TPG’s paintings, sculptures, and photographs form a new strategy where hip-hop and Hollywood converge as historical and political resurgence.

The rise of Communism in the twentieth century led to the erecting of statues of Vladimir Ilyich Lenin around the world, making him the most monumentalized individual in history. Lived, Lives, Will Live! reexamines the legacy of the revolutionary leader as the unraveling of Communism has brought about the subsequent toppling of these monuments. TPG’s works revive Lenin through a hyper-consumerist rebranding of his public image for the twenty-first century.

Inaugurating an ongoing series of paintings, TPG have commissioned hand-embroidered interventions on original painted portraits of Vladimir Lenin that once hung in regional Communist Party headquarters across the U.S.S.R. With the addition of various hairstyles spanning Leonardo DiCaprio’s filmography, the revolutionary leader is equipped for contemporary superstardom. Drawing from Internet conspiracies about DiCaprio’s being a lost relative of Lenin, the series addresses the political ramifications of representation and celebrity idolatry. As culture blogs report that DiCaprio will play Lenin in a rumored film, TPG will continue the series throughout the actor’s career until the two figures are united in a Hollywood historical drama, collapsing history and identity.

Additionally, TPG will embellish public monuments of Vladimir Lenin with jewelry as grandiose as the statues themselves. Beginning with one of the first dismantled monuments of Lenin—removed from Leninplatz, East Berlin in 1992—TPG plan to acquire the head of the monument, plate it in gold, and hang it from an oversized Cuban-link chain on the 27-meter tall Lenin statue in Volgograd Russia—the largest remaining in the world. In preparation, the group has created a set of large scaled architectural maquettes depicting the process of beheading, blinging, and installing the transformed head of the Leninplatz sculpture.

The gold pendant, amplified to a monumental scale, references various methods of portraying power throughout history—royal jewels, war medals, etc.—and the appropriation of these tactics through the ostentation and exaggeration of hip-hop culture. Alluding to diamond-encrusted Jesus pieces and rapper Rick Ross’s pendant portraits of himself, TPG’s proposed monumental bling explores the border between identity and ornamentation, tracing the malleability of personality in the public sphere.

TPG will also produce a series of photographs, imagining the blinged-out Volgograd Lenin in its site-specific context. These digitally produced renderings highlight the enormous scale of their proposal and reference the unrealized utopian plans of Vladimir Tatlin and El Lissitzky. Pedestals around the gallery will hold jewelry-store displays, showcasing human-scale gold-plated Lenin necklaces. Produced in an edition of 5, these 3D printed necklaces blur the line between sculpture and jewelry, transforming a public monument into reproducible, privately owned commodities.

The Propeller Group uses mass media as a platform to combine seemingly contradictory phenomena: advertising and politics, history and future, and public and private. TPG often pushes their work back into the public sphere, using commodities as a form of public art. As an integral part of their practice, TPG has cultivated the guise of an advertising agency—a public relations firm that confuses the brand and the brand message. Their work has recently been included in No Country: Contemporary Art for South and Southeast Asia at the Solomon R. Guggenheim Museum, New York, and The Ungovernables, New Museum Triennial. TPG has also exhibited at The Museum of Modern Art, The Hammer Museum, The San Francisco Museum of Modern Art, the Guangzhou Triennial, and The Singapore Art Museum. In 2007, the group co-founded Sàn Art, an artist-initiated contemporary art platform in Vietnam.