Essential Phenomena is the second installment in a series of exhibitions by Brian Reed and Mike Dawson, which began with 'Lavish Conviction'. 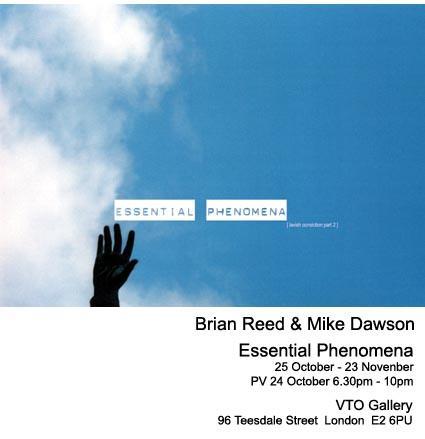 VTO is pleased to present recent work by Brian Reed and Mike Dawson.

Essential Phenomena is the second installment in a series of exhibitions by Brian Reed and Mike Dawson, which began with 'Lavish Conviction'. The exhibition 'emulates the potent iconography of the day whilst simultaneously undermining the mechanisms that hold them aloft' Commercial icon to art object of invigorated value seems a discourse going 'global''. Paul Anthony Black, Flash Art, Jan 2002.

Mike Dawson is fascinated with the place where the worlds of Media and Art collide and intermesh. Reporting from the crash-site for this exhibition are Dawson's various alter-egos: Robin Nature-Bold, The Gallery Guard and The Someone (an elusive curatorial collective of twelve agents based in Norway).

His 'Sycophantic, (Certified Eulogy & DIY) Part 1' is a half-fictional, half-factual, low-fi, pseudo-documentary. In this video piece Dawson prowls the streets armed with his camcorder, and turns up (late at night and unannounced) at the homes and workplaces of several associates, all owners of Robin Nature-Bold 'In-denial T-Shirts'. Dawson is on a mission to find out exactly what these people have done with their T-shirts, and won't leave until he has answers.

Continuing with the theme of self-obsession, Dawson presents Nature-Bold's oxymoronic 'I Love-Hate What I've Become', a scrap book (a limited edition of three) containing a collection of photocopied genuine reviews, previews, interviews and editorials alongside a series of fakes (including imitations of art magazines such as Frieze and Art Monthly): all have been taken from Dawson's 'Certified Eulogy & DIY' series which has appeared over the last three years. A novel twist is provided by The Gallery Guards' 'Voices of Poetic Reason', a comments book containing the remarks of famous people (both living and dead (i.e. Andy Warhol, Sid Vicious, Peter Sellers, Brian Eno and Christopher Eccleston) about 'Essential Phenomena' a week before it had taken place. The comments were sourced by a legitimate 'medium' (conducted at The Chelsea Hotel, NYC, USA) who used long-distance, telepathic mind-reading techniques and psychic powers.

Brian Reed explores the realms of authoritarianism and enlightenment in the face of growing tension between opposing ideologies and civilisations, and the battle for control of our aspirations. Reed examines all this through a series of text-based objects and photographic works. Utilising the changing interpretations and open meanings of statements, this series of works remains ambiguous in both its attitude and stance.

His wooden Bingo Jesus sign is inspired from an old bingo hall in Manchester that is now used as an evangelical church, and stands, like the hall itself, as a symbol to the world of instantly obtainable salvation and fulfillment. It is a new version of the piece first shown in 'To the Glory of God, New Religious Art' at the Liverpool Biennale. In a development and progression to the theme, the photographic piece Mecca Bingo, with the hall excised from the photograph, leaving only the Mecca sign and a pelican crossing, which appears to the viewer like an illuminating pathway, creates a discourse between different belief systems and the divine right.

Other works by Reed include Same Day Cleansing, a cardboard sign alluding to both ethnic cleansing and spiritual cleansing. While Cull, a bronze cast of rubber stamp, explores the power that one individual or group has over others and the desire to obtain and maintain that power at any cost. Advance Warning is a wall painting that uses the visual language of urban-protest graffiti to act as a sign of unrest and discontentment.

Hand, a photograph depicting a lone raised hand of a bronze monument erected by those in power to convey their importance is set in the motion of voting, seeking or, more sinisterly, the last movements of someone being shot in the back.

Both artists' works probe contemporary belief systems and the mechanisms of value and values. Essential Phenomena will be touring in 2004.

Mike Dawson graduated from Manchester Metropolitan University MA (Art as Environment) in 2000. Since then he continues to pursue his art practice whilst undertaking roles such as Visual Arts Editor for Flux Magazine, founding curator for Flux Space, and consultant for comme Ca Art. He's exhibited both nationally and internationally, and recent shows include 'AT THE END OF THE DAY' at Cornerhouse, Manchester as a part of 'artranspennine03', 'Thermo03' The Lowry Centre, Salford and 'BOOTLEG' Spitialfields Market, London. He has also gained regular media coverage in Flash Art, Dazed & Confused, I.D and Artist newsletter. His work has begun to be collected widely and is included in the collections of the Dewhirsts, Frank Cohen and Tom Bloxham (Urban Splash).
For further info visit: http://www.mikedawsonart.com

Brian Reed graduated from Central St. Martins. Since then he continues to produce works in varied formats and alias. He's exhibited both nationally and internationally, and recent shows include 'BOOTLEG' Spitialfields Market, London. He has also gained regular media coverage in Flash Art, Dazed & Confused.

Open: Friday to Sunday 12-6pm or by appointment