'Notationotations' features three nightly performances and a one-week-long exhibition. This piece posits that if a line is the trace of a point in motion, then the human body moving through space is also a drawing inserted into the four-dimensional space of the observed world. 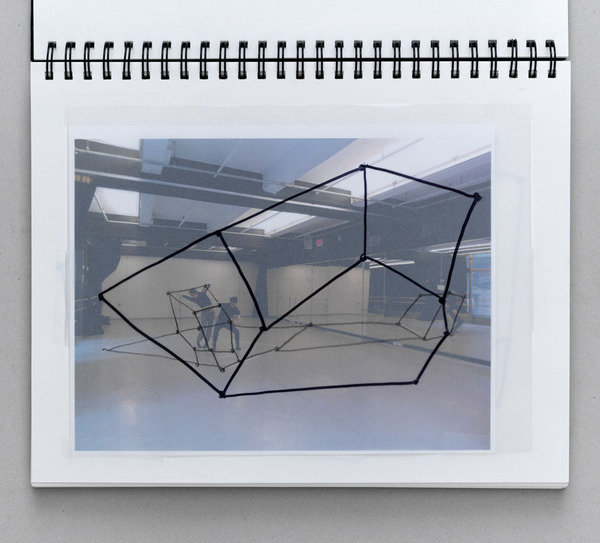 New York – During the 2013–14 season, The Drawing Center will introduce its Performance Series, three commissioned performances that showcase important intersections between performance, time-based practices, and drawing. The first is the world premiere of Susan Hefuna and Luca Veggetti: NOTATIONOTATIONS, September 16–20, 2013, with three nightly performances on September 16, 17, and 18, and a one-week-long exhibition in the Main Gallery and the Drawing Room.

NOTATIONOTATIONS marks a first-time collaboration between renowned multimedia artist Susan Hefuna (b. Germany, 1962) and contemporary choreographer Luca Veggetti (b. Italy, 1963). This piece posits that if a line is the trace of a point in motion, then the human body moving through space is also a drawing inserted into the four-dimensional space of the observed world. Staged over three nights, NOTATIONOTATIONS opens and closes with Hefuna’s New York City Crossroads, a new video installation of a bustling lower Manhattan intersection. On the gallery floor Hefuna will execute an expansive web of chalk lines, her actions also captured on film and screened while Veggetti’s dancers gradually erase the drawn surface through their repetitive, physical gestures. The result is its own form of choreographic documentation. Hefuna’s multilayered, ink-on-tracing-paper abstractions, which build upon the labyrinthine floor drawing in the Main Gallery, and documentation of the live performance will be on display in the lobby. Produced by Brett Littman, Executive Director and Joanna Kleinberg Romanow, Assistant Curator.

TICKETING
A ticket to The Drawing Center ($5 general audience, $3 students and seniors) includes admission to the performance. Tickets are only available the day of the performance and on a first come, first serve basis.

PERFORMANCE SERIES
The Drawing Center has long been dedicated to exploring both contemporary and historical drawing in its many forms. It also has provided a platform for new scholarship on, and insights into, the past, present, and future of the medium. Building on this tradition, The Drawing Center introduces its Performance Series, three commissioned performances presented over the course of the 2013–14 exhibition season, that showcase important intersections between performance, time- based practices, and visual art. While The Drawing Center has regularly hosted live performances to accompany to its exhibitions and has featured work by various performance artists, the Performance Series marks a new initiative that champions performance as a significant component of the institution’s programing. The Performance Series is produced in collaboration with five leading contemporary practitioners: Susan Hefuna & Luca Veggetti, Rashaad Newsome, and Andrea Bowers & Suzanne Lacy.

Luca Veggetti (b. 1963, Bologna, Italy) trained as a dancer at La Scala, Milan. In 1990 he began working as a choreographer and stage director, collaborating with preeminent musical ensembles and composers including Toshio Hosokawa, Kaija Saariaho, and Matthias Pintscher. Since then Veggetti has participated in The Solomon R. Guggenheim Museum’s Works & Process series, and he has worked with the Martha Graham Dance Company, The Juilliard School in New York, Cedar Lake in New York, and the Spoleto Festival in Italy. He directed the Japanese premiere of Toshio Hosokawa’s Hanjo in Tokyo, the world premiere of Iannis Xenakis’s Oresteia at the Miller Theater in New York, the U.S. premiere of Kaija Saariaho’s Maa also at the Miller Theater, and the French premiere of Maa at La Cité de la Musique in Paris. Veggetti was the first resident artistic director of Morphoses for its 2011 season, during which he produced his Bacchae at the Joyce Theater in New York. Future projects include the world premiere of Pier Paolo Pasolini’s Vivo e Coscienza at Mittelfest in Italy, the staging of Toshio Hosokawa’s The Raven for the Gotham Chamber Opera at the Biennial of the New York Philharmonic and Hosokawa's Vision of Lear in Japan, and a choreographic version of Iannis Xenakis’s Pleiades for the Japan Society in New York.

Special thanks to the dancers Olivia Ancona, PeiJu Chien-Pott, a soloist from the Martha Graham Dance Company, and Gabrielle Lamb.

PUBLICATION
To accompany NOTATIONOTATIONS, The Drawing Center will produce an edition in the Drawing Papers series that will include an introductory essay by Brett Littman and Joanna Kleinberg Romanow, together with pages from Hefuna and Veggeti’s individual process sketchbooks, stills from Hefuna’s film, New York City Crossroads and images of Hefuna’s drawings.

CREDITS
NOTATIONOTATIONS is made possible through the generous support of the Robert Rauschenberg Foundation’s Artistic Innovation and Collaboration Program, which supports risk-taking and innovative collaborations in the spirit of Robert Rauschenberg.
Additional funding is provided by Saeb Eigner and Rhona Hoffman Gallery, Chicago.

ABOUT THE DRAWING CENTER
The Drawing Center is the only not-for-profit fine arts institution in the country to focus solely on the exhibition of drawings, both historical and contemporary. It was established in 1977 to provide opportunities for emerging and under-recognized artists; to demonstrate the significance and diversity of drawings throughout history; and to stimulate public dialogue on issues of art and culture.

Premiere on September 16 at 7pm

Additional performances on September 17, 18 at 7pm