A machine desires instruction as a garden desires discipline

The winning Project in the most recent call of the Award for Young Curators. This proposal by Catalina Lozano brings together a number of artworks and research projects (videos, installations, graphic works, documents), with specific characteristics for each venue. 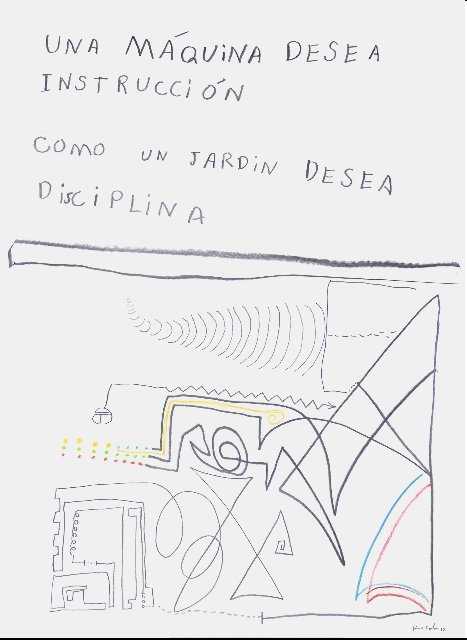 Exhibited works
A machine desires instruction as a garden desires discipline — title borrowed from a piece by Jimmie Durham — was the winning Project in the most recent call of the Award for Young Curators. This proposal by Catalina Lozano brings together a number of artworks and research projects (videos, installations, graphic works, documents), with specific characteristics for each venue.

MARCO/Frac Lorraine Award for Young Curators
A machine desires instruction as a garden desires discipline was the winning project of the most recent call of MARCO/Frac Lorraine Award for Young Curators (2012), which was jointly organised by both institutions, for the third time in a row. The idea was to produce an exhibition project to be carried out in both exhibitions venues. MARCO, Museo de Arte Contemporánea de Vigo, and FRAC (Fonds Régional d’Art Contemporain) come together again in a co-production project promoting contemporary art beyond their territorial frontiers, with a common interest in supporting new generations of professionals. On this occasion, the winning project is a proposal by Catalina Lozano (Bogotá, 1979), an independent curator and researcher who lives in Mexico.

A machine desires instruction as a garden desires discipline
This exhibition project — whose title is taken from a piece by Jimmie Durham — takes as a starting point the assumption that the History of Colonialism and Modernity are inextricably linked and subsequently explores the origins of European Colonialism, its processes of internal colonisation and what the creation of a Modern Europe meant with respect to renouncement, freedom identity and the construction of its own mythology.

This project analyses the internal colonization processes that historically coincide with the transition to capitalism and the formation of modern thought and politics, and also with the gradual establishment of nation-states which corresponded with homogenizing processes imposed over several peoples.

The project seeks to describe lines of thought that we have summarized into the following three headings: the reduction of diversity, the denial of coevalness and the myth of the disinterested observer. These are not isolated, but interwoven into an intricate fabric, however incomplete and unstable. The works brought together in this project try to blur the Platonic dualism between the material and abstract worlds, appropriated by Christianity (body and soul), then secularized in modern thought (body and reason), and widely redistributed in social classifications.

Catalina Lozano (Bogotá, 1979) is curator and researcher. She studied History (Universidad Nacional de Colombia), Visual Culture (Goldsmiths College, London University), and Theory and Practice of Language and the Arts at the École des Hautes Études en Sciences Sociales (EHESS) in Paris. She is particularly interested in minor narratives and the revision of dominant historical discourses. Some of her most recent projects include La puerta hacia lo invisible debe ser visible, Casa del Lago, Ciudad de Mexico (2012); ¿Tierra de nadie?, Centro Cultural Montehermoso, Vitoria-Gasteiz (2011); and Everything has a name, or the potential to be named (co-curated with Anna Colin), Gasworks, London (2009). Between 2008 and 2010 she was responsible for Gasworks Residency Programme in London. She is co-founder of de_sitio, a platform of contemporary art in Ciudad de Mexico.

After its closure in Vigo, the exhibition will travel to FRAC Lorraine, Metz, France, where it will be open by the end of February 2014. Certain variations in contents and structure shall apply.