Bolshe Sveta / More Light. While being a reflection on different structures of space-time-both in the context of capitalist economic overproduction and new technologies, the exhibition considers space-time as energy, as light, as the energy generated between us, as a creative force, as life force. The biennale will feature work by 72 artists from 40 countries. 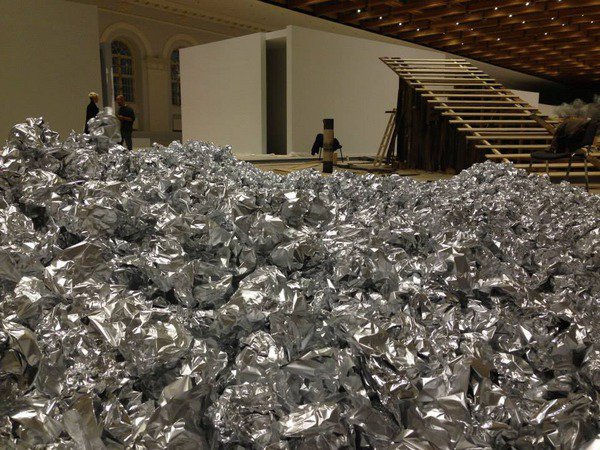 “Bolshe Sveta / More Light allows for a dynamic platform stimulating vivid conversation and action, at the crossroads, where different concepts of space and time, and consequent structures of thought and sensibility, are proposed. In many parts of the world, the contemporary global network society is developing a very specific space-time dimension (or ‘chronotopy’) with an emphasis on fast pace and uniformity of experience. The interconnected world has lost sight of our place in a present that is never ‘here and now’, because in the flow of globalization, a local chronotopy in which our perception of time is connected to a geographically defined place, is supplanted by aglobal chronotopy. With world time increasingly ticking to the rhythm of neo-liberal capitalism, space is being obliterated through time. Consequently, there is an urgent need to enact another kind of movement. Slow time, then, can be key to being differently in a world that is otherwise driven by capital and patriarchy.

The 5th Moscow Biennale foregrounds artists whose work focuses on complex ways of giving, taking, and spending time and questions normative alignments of space-time. While being a reflection on different structures of space-time—both in the context of capitalist economic overproduction and new technologies—Bolshe Sveta / More Light considers space-time as energy, as light, as the energy generated between us, as a creative force, as life force. It acknowledges the necessity of passionate commitment and illuming creation for the development of new thinking. Therefore human experience is firstly directed toward the small actuality of the present condition instead of being home to a nostalgia for the past or a utopia for the future, because that hoped-for-future is always elsewhere.

On a global and local scale, artists are investigating issues concerning the increasing lack of time (we have ‘no time’) and the corporate encroachment on space. Artists do so, for example, by creating ‘Factories of Free Time’ or proposing ‘In a Different Time’; they invite audiences to ‘Stitching Time’, and entreat them to ‘A Moment of Eternity in the Passage of Time’, an ‘Infinity Landscape’ or ‘To Trample Down an Arable Land’—all works that will be shown in the upcoming Biennale. The focus on space-time, as it is experienced in diverse parts of the world, shapes the 5th Moscow Biennale—the notions of ‘taking place’ as space, happening, occurring and ideas of ‘the present’, in short, a ‘space-time’ situated in contemporary debate. In contradistinction of the thematic in current exhibition making, the Biennale proposes a sphere of energetic negotiation, a very lively issue in the actuality of new thinking and of new concepts of art for the twenty-first century.

During the twentieth century, modernity has stressed individualism, independence, identity and the differences that go with it. Negativity was the basis of radical critique and the critique was a way of looking to the past while moving ahead, without facing the present and future. InBolshe Sveta / More Light, artists and audiences experience a new engagement in the continuities between past, present, and future, through daily routines and rituals, in a time that is of the present, sometimes intimate and domestic, and that is related to our environment. It is an attempt to shed more light on large problems and questions of our time in society.

The Fifth Moscow biennale of contemporary art will take place from 19th September to 20th October 2013 in the Central Exhibition Hall "Manezh" with support by the Ministry of Culture of the Russian Federation and the government of Moscow. Joseph Backstein is the commissioner and artistic director of the biennale. The international advisory board has selected Catherine de Zegher as the curator.

Catherine de Zegher is curator, editor, critic, art director of the Sydney biennale 2012, invited curator of the New York museum of modern art and The Fundacio Antoni Tapies in Barcelona.
On 2nd of October at 16.00 the exhibition hall Manezh will host the press conference dedicated to the Fifth Moscow biennale of contemporary art.

The biennale will feature work by 72 artists from 40 countries, many of whom will be exhibiting in Russia for the first time. There will also be a number of fringe exhibitions at galleries across the city including at the Tretyakov State Gallery, the Moscow Museum of Modern Art and the Garage Centre for Contemporary Culture.