Theaters of Experience. Featuring a tightly focused selection of works, the current exhibition looks at the artist's use of performance strategies as a conduit for heightened self-awareness for both artist and viewer. 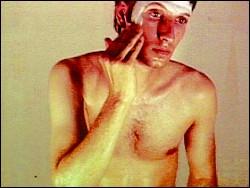 One of the most influential artists of our time, Bruce Nauman, b. 1941, is known for his challenging and diverse practice. Working in a range of media, from holography to neon to video, the artist has investigated as varied an array of subject matter, from the nature of the art-making process to the nature of the human condition. Featuring a tightly focused selection of works, the current exhibition looks at the artist's use of performance strategies as a conduit for heightened self-awareness for both artist and viewer. Like many artists who began working in the 1960s, Nauman rejected the traditional, self-contained art object in order to create an art of real experience. Inspired by the participation or "performance" of the viewer inherent in all sculpture, which requires the spectator to walk around it, Nauman began making works which first featured his own movement, and subsequently, that of his audience. Nauman's interest in art which expresses the passage of time was further influenced by his awareness of contemporaneous avant-garde dance, music, and film. Artists such as Meredith Monk, Steve Reich, and Andy Warhol were exploring the aesthetic and conceptual aspects of duration and repetition as well as incorporating remnants of the everyday in their own compositions. Likewise, using his studio as a kind of lab-theater, Nauman exploited his own daily routines and habits, such as pacing back and forth, and began recording these simple, and increasingly scripted tasks on film. "An awareness of yourself," the artist has said, "comes from a certain amount of activity...." Given Nauman's interest in word play and puns, it is difficult to disassociate his focus on deliberate activity from the word's root - to act - the dual meaning of which often collapses in Nauman's work. When one acts with a level of self-consciousness, one becomes an "actor." As Nauman repeats these gestures over and over again for the camera (as we all repeat the rituals which give shape and meaning to our lives), he simultaneously frames them as both absurd and captivating. Played continuously the videos present a narrative without beginning or end and capture life's own strange continuum.

Nauman's early focus on himself as both material and subject switched to the viewer in the 1970s. Performance Corridor (1969), the first of his constructed environments, marks the transition between works that feature the artist as performer and those for which he became the director behind the scenes.

Made from plywood and measuring twenty feet long and only twenty inches wide, the narrow passageway (designed to the width of the artist's hips) was first conceived as a prop for the work Walk with Contrapposto (1968). In the video, the artist is seen parading down the corridor in the exaggerated, stylized manner of classical sculpture. By striking this pose, whose historical function was to create the illusion of movement in a static figure, Nauman is perhaps making the point that in art that allows for real action, such devices are unnecessary. Not long after making this piece, the artist realized that the viewer could enact the same action or performance, and in so doing experience a keener sense of his physical and perceptual states. Nauman disappeared from his work and his subsequent series of corridors and rooms became the stage sets upon which he would choreograph the viewers' activities and responses. Incorporating mirrors, cameras, and monitors into his rather restricting environments, the artist allows the viewer to watch his own performance, yet he or she is often confronted with a simultaneous recognition and mis-recognition of his or her variously truncated, masked or inverted image. Reminiscent of fun-house distortions, they inspire a similar uncertainty in what is real or unchanging. Like his studio films which offered no satisfying resolution, the corridors also deny the viewer the comfort of the familiar.

In the 1980s, as his work became more political, the artist introduced more overtly theatrical characters, including clowns, jesters, and mimes, into his vocabulary and emphasized the masquerade characteristic of the social theater. Like the corridors and (the artist's language-based works), these pieces also suggest the normally-unquestioned exterior forces that often dictate behavior and inform the self. Mean Clown Welcome (1985), which depicts two clowns who attempt over and over to shake hands but never quite connect, re-enacts the self-alienation the viewer experienced in the corridors but with an "other." Simultaneously recognizable and hidden behind a mask, the clown may be yet another mirror image of the audience and our own rather tragi-comic situation on the world stage - our frequent failure to communicate with one another. The exhibition concludes with Raw Material -BRRR (1990),a video installation that signals Nauman's re-appearance as the primary focus of his work after twenty years. Recalling his earlier examinations of the self through bodily exercises, the work shows the artist's image multiplied, distorted, and disembodied. As a "talking head" - another type of performer -Nauman spouts incessantly what seems to be a meaningless sound but what can also be read as the first letters of his name - "BRRR." Nauman may be reintroducing himself to us with this work, whose title, Raw Material, suggests a state of potential and reminds us of the possibility that lies within Nauman's existential theater through the power of self-examination.