The Hirschsprung Collection from Eckersberg to Hammershoi. A decisive shift towards modernism took place in Danish art during the 1880s: grand narratives were replaced by snapshots of reality. Curated by Jenns Howoldt. 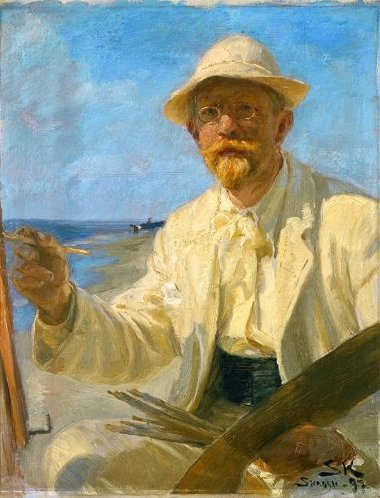 The Hirschsprung Collection in Copenhagen is one of the finest and most extensive collections of 19th-century Danish painting. All the leading Danish artists of the period are represented in this collection, which was built by the tobacco manufacturer and passionate art collector Heinrich Hirschsprung (1836–1908) and has been on display in its own museum since 1911. The exhibition of Hamburger Kunsthalle is presenting about 80 works of this collection. Never before did the Hirschsprung Collection lend a larger quantity of artworks. Therefore, the Hamburger Kunsthalle is presenting an exceptional survey of Danish art from the mid-19th century to the early 20th century, which has never been presented on this scale in Germany before.

A decisive shift towards modernism took place in Danish art during the 1880s: In the preceding decades, artists had continued to adhere to Romantic ideals and focussed mainly on national themes. Now, Danish painters offered a new, more realistic perspective on rural life. Grand narratives were replaced by snapshots of reality – unvarnished depictions of Danish country life, stripped of all idealism and devoid of the pathos of history painting. Art played such a key role in this far-reaching modernisation process, which affected many areas of Danish society at the end of the 19th century that this period is now described as the era of the ‘ modern breakthrough’.

The exhibition begins with exemplary paintings and drawings from the ‘ Danish Golden Age’ during the first half of the 19th century with works from Christoffer Eckersberg (1783–1853), Christen Købke (1810–1848), Johan Th. Lundbye (1818-1848) and Christen Dalsgaard (1824-1907). Influenced to a certain extent by modern French art and the ‘ return to nature’ advocated by the painters of the Barbizon School, artists such as Theodor Philipsen (1840–1920) and Joakim Skovgaard (1856–1933) also presented a different view of the Danish landscape. This involved paying particular attention to the realistic depiction of light and atmospheric conditions at different times of day and throughout the year.

The exhibition shows these works through to the Danish Impressionists and Symbolists including the internationally renowned painters Anna Ancher (1859-1935) and Peder Severin Krøyer (1851–1909) as well as Vilhelm Hammershøi (1864–1916).

In parallel to the exhibition in Hamburg about 60 artworks of the collection of the Kunsthalle are presented at the Hirschsprung Collection in Copenhagen. The works are exemplary for the collection of German painting from Romantic to Impressionism.

The exhibition is accompanied by a catalogue, published by Dölling and Galitz Verlag (176 pages, 140 colour images, hardcover, 24,90 Euro).