Different Kinds of Water Pouring Into a Swimming Pool. A series of architectural case studies based in the city of L.A., in which he problematizes the importance of such cases as places of socialization and community. 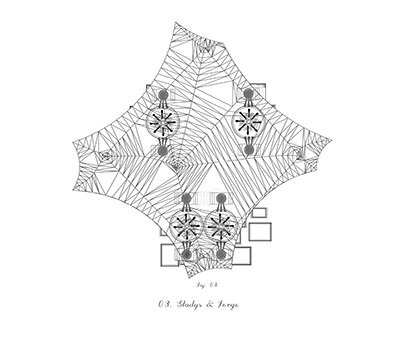 In an interview with Orson Welles in 1964 about the witch-hunt being carried out against Hollywood celebrities during the McCarthy-era, the filmmaker pointed out a strange paradox: while many people during the Second World War had betrayed their friends to save their own lives, in the golden-age of Hollywood, people did it to save their swimming pools. Far from downplaying Orson Welles’ observation, it is nonetheless interesting how these aquatic scenarios and backyard gardens have always been seen as something superficial, destroyers of social cooperation and enemies of the political.

In this first solo project by Andrés Jaque / Office for Political Innovation in Los Angeles, the architect prepares an exhibition, with a series of architectural case studies based in the city of L.A., in which he problematizes the importance of such cases as places of socialization and community, leaving behind the stereotypes that characterize them as disconnected spaces, symbols of ultra-individuality and comfort.

For Andrés Jaque, it is in these interior spaces where decisions are made, the heterogeneity that underlies the garden city is casually discussed, and the conflicts and negotiations of domestic space are established. These are almost invisible architectures, hidden between palapas and high hedges, conceived from the rhythms of the human body and its daily choreography. In that sense, Andrés Jaque understands his work in a way that is very similar to performance art that since the 70s has focused on the body and its relationship to its surroundings, as the main site of artistic practice. This is a dynamic architecture, one that is in constant tension, and that prioritizes its performative quality to engage daily transformations and conflicts.

In the architect’s installation, the body is present through its absence, and the performative quality is represented symbolically by water—one of the main actors in the Californian backyard gardens. It is not arbitrary that this exhibition takes its name from David Hockney’s drawing, "Different Kinds of Waters Pouring into a Swimming Pool, Santa Monica," 1965, made during his first years in the city. Fascinated by the way people in Los Angeles used water to help shape their private gardens into social spaces, the painting shows a series of simple pipes pouring water into a swimming pool that can’t be seen. Although the material quality of water is elusive, its representation reaches a quasi-architectural dimension, without losing its ephemeral and dynamic aspect. As such, each waterfall becomes an exclusive portrait of a common situation. This might read as a metaphor for the everyday stories that the great narratives of urbanism have left out, but these are certainly places where certain forms of citizenship and interaction essential to architectural processes occur.

The exhibition Different Kinds of Water Pouring into a Swimming Pool is accompanied with a small publication by the same name that features an essay by the architect, further discussing the ideas presented in the gallery.

Andrés Jaque and the Office for Political Innovation was founded in Madrid in 2005. This architecture office explores the potential of post-foundational politics and symmetrical approaches to the sociology of technology to rethink architectural practices.

They are authors of reference buildings including Plasencia Clergy House, awarded with the Dionisio Hernández Gil Prize and finalist of the VIII Bienal Española de Arquitectura y Urbanismo; House in Never Never Land, finalist of FAD Awards and Mies van der Rohe European Award. Recently, the Museum of Modern Art of New York (MoMA) acquired IKEA Disobedients as the first architectural performance piece to be included in its collection. In 2012, they presented their intervention PHANTOM. Mies as Rendered Society at Mies van der Rohe Pavilion in Barcelona. Their work has been featured in Gwangju Biennale, 2011, and the Biennale di Venezia 2010.

Andrés Jaque has been Tessenow Stipendiat in Alfred Toepfer Stiftung FVS, and he is now professor at GSAPP Graduate School of Architecture, Planning and Preservation at Columbia University in New York.