A Handful of Earth from Paradise

Magic Pictures and Objects. The show deals with art's ability to find a sensual-concrete form for the supernatural and, vice versa, to transform the profane, the mundane, by charging it with magic. With Michael Buthe, Bernard Schultz, Lucio Fontana, Alexander Calder, Jan J. Schoonhoven, Otto Piene and many more. 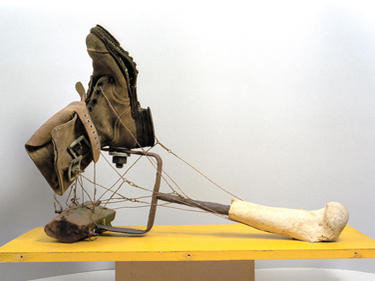 Artists have always been, and indeed still are, irresistibly tempted to engage with fetishes, the magic of things and metamorphoses, with the spheres, the transcendent and the sacred. The collection of the Museum Morsbroich testifies to this. Yves Klein's Monochrome bleu, 1959, Bernhard Schultze's fabulous artistic creatures, the Migofs, and the huge cultic objects made of piano keyboards by Belgian sculptor Vic Gentils—these are works whose magical character enthrals viewers, demonstrating once again the outstanding treasures that the collection contains. This exhibition thoughtfully examines these magical works and their attraction.

Daniel Spoerri's fetish-like objects recognised the legacy of the Surrealists, who collected objects related to cultic practices and sought the origins of art in magic. As an artist-magician, the Swiss Spoerri pursued new image-strategies by alluding to an understanding of "magic" as dream interpretation, ascetic practice and what he referred to as the "art of the knife" (Spoerri, 1968)—the knife that divides objects into sections to be reassembled like in a collage. Cow's horn and rat's tail are combined with found metal objects or an emptied coconut and presented like relics, titled Zimtzauberkonserven (Cinnamon Magic Conserves).

With exhibitions such as Monochrome Malerei (1960), Metamorphosen (1965) and Fetisch-Formen (1967), Udo Kultermann (1959–1964) and Rolf Wedewer (1965–1995), directors of the museum in the 1960s, drew attention to magic artworks whose openness to the transcendent and the religious, the dreamlike and the fantastic, offered new perspectives on the world. The collection gained works such as Lucio Fontana's Expectations, a picture which accesses a deep mystical space thanks to slits in the canvas; one of the mobiles with which Alexander Calder attempted to link the physical, mental and emotional spheres; or Otto Piene's visionary image of the heavens, La Lune en Rodage (The Moon Rover), 1961/67.

Günter Uecker's nail pictures were joined by fetish objects by Joachim Bandau, Arnulf Rainer's over-paintings by a rubbish picture by Hermann Nitsch reminiscent of religious practices; Adolf Fleischmann's totemistic painting was confronted with the spiritual works on canvas by Michael Buthe, who was interested in Shamanistic rites, while Daniel Spoerri's Zimtzauberobjekte (Cinnamon Magic Objects) made of "knick-knacks" met a typewriter which Konrad Klapheck transformed into a Kinderfräulein (1964).

The magic collection which these pictures and objects came to represent over the course of the years at the Museum Morsbroich constitutes an important part of the museum's holdings and is being presented here for the first time in a survey exhibition complemented by important works on loan.

An exhibition catalogue will be published by Kerber Verlag, with a curatorial foreword by Markus Heinzelmann and scholarly essays by Dorothee Böhm, Kay Heymer, Stephan von Wiese and Astrid Wege, plus a picture section with photographs of the Museum Morsbroich's depot by Laurenz Berges (pp. 112 with approximately 100 colour reproductions).

As of 26 May, in the Works on Paper Galleries of Museum Morsbroich:
Zilla Leutenegger: 13 Rooms – A Biography in Clothes
12 October–12 January 2014