For his last film Chen Chieh-jen paid a more particular attention to the "internal exiled people", as he described them, of the economic policy of Taiwan. Lee Bull: in the Grand Hall a monumental installation, furthermore the exhibition presents from Cyborg series to very recent pieces. The phantasmagorical work of Elmar Trenkwalder, celebrates the exalted and hallucinated part of the human spirit. "J'ouvre les yeux et tu es la'" gathers about 15 artworks from the Mudam Collection. 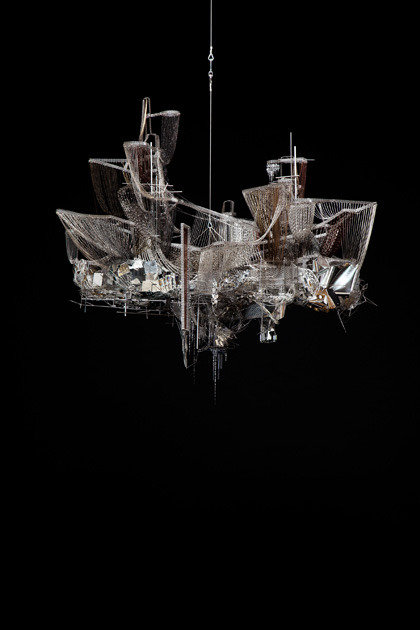 Since the beginning of the 2000s, Chen Chieh-jen, foremost figure of the Taiwanese art scene, makes movies on political and social matters, mainly focusing on the conditions of life of marginalised populations. For his last film, Happiness Building I (2012), the artist paid a more particular attention to the “internal exiled people”, as he described them, of the economic policy of Taiwan. The exhibition of Chen Chieh-jen at Mudam will allow the European audience to discover some of the last movies of the artist.

Lee Bul is one of South Korea’s most active artists on the international contemporary art scene. She began her career in the eighties with a series of street performances in which she wore prosthetic dresses – morphological extensions with which she transformed her appearance. More recently, Bul’s work has gravitated towards architecture. After subjecting the human body to distortions and manipulations, the artist is now transfiguring our built environment and undermining our perception of space. Her exhibition at Mudam will occupy the entire lower ground floor and include a site-specific work for the museum’s Grand Hall.

The exhibition J’ouvre les yeux et tu es là (I open my eyes and you are there) gathers about fifteen artworks from the Mudam Collection, including several recent acquisitions. The works show the fragile movement of appearing and disappearing images: ephemeral shadow images, the appearance of an image on a sheet of paper or a canvas, the reflection, the projection, the inception of mental images... The title of the exhibition is borrowed from one of the paintings of the series Le monde voit (The World sees) by Rémy Zaugg, who questions our gaze, appearance and invisibility.