Inside the White Cube will present a new group of paintings by Berlin based painter Eberhard Havekost. Havekost exploits the tension between the highly mediated image and the visceral immediacy of a gorgeously painted surface. White Cube is pleased to present new work by London based artist Cerith Wyn Evans. Wyn Evans will exhibit an installation consisting of a field of transparent, crystal chandeliers momentarily flashing on and off, rendering Morse code from a series of texts driven through a network of hidden computers. 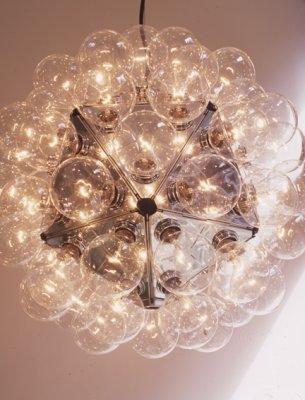 Inside the White Cube will present a new group of paintings by Berlin based painter Eberhard Havekost. Havekost exploits the tension between the highly mediated image and the visceral immediacy of a gorgeously painted surface. Working from photographic sources, shots from TV and video and images culled from magazines and catalogues; he selects prosaic subjects - anonymous buildings, garbage areas, trains and trailers - scanning them into his computer where he modifies them, making inkjet prints as the starting point for his paintings. His paintings are difficult to decipher, quotidian images that are abstracted into a kind of mannerism of the everyday.

Havekost's paintings are made slowly and with immense care; composed in colour over a series of six underlying and alternating coats of grey and white. They are permeated by a luminous atmosphere of light that is generated not by the radiance of the colours themselves and the light effects of their combinations, but rather by the even quality of 'chiaroscuro' - light and shade - that runs beneath all the imagery. Havekost describes this as a 'democratic light' comprised of a white light which is employed not for its dramatic effect to spot-light individual instances but to reveal the immanent brilliance of everything.

The End against the Middle is a landscape painting of the most humble and partial kind, a close-up cropped view of a section of a garbage depot, seen as if through a pane of frosted glass, or the haziness of a TV screen. The painting is constructed with sharp diagonals in the lower foreground which compete to lead the eye back, their ever-changing dynamic creating an essentially unstable image in which the eye scans to find a stable point of entry but is continually thrown off. Likewise, a bold horizontal band of grey runs across the bottom of the picture acting as a visual barrier, a distancing device to refuse the viewer's gaze. Along with these vertiginous angles the painting displays dramatic shifts in focus - a blurring effect sweeps across the image, softening grass, stones and bits of rubbish - a visual distortion like a filmic pan. The instances of visual clarity appear strangely intense and heightened.

The End against the Middle is a fluid and dynamic painting and, in contrast, Luft, has a quiet atmosphere of stillness and solitude. Luft is a partial painting of a male figure in trousers and a jumper, which seems strangely abstracted, as if the body itself has escaped. The figure is cropped, squeezed and elongated to fit its frame, sitting hunched on a chair in an introverted attitude, yet disembodied and made abstract and light.

Stop the Panic and Start the Panic are two dynamic paintings, which superficially offer very similar views of the same lightweight glider plane whose smooth streamlined forms speak of Modernism's quest for speed and flight. They explore a serial view of the same object shown from the same angle but at different moments as if the subject is crossing the planes of both pictures at once.

Havekost paints a world that refuses to be still and sit within a frame, one that is continually on the move. He deconstructs perception and explores its fleeting contingency, making freeze frames that pauses the visual process, transforming it into an arresting, material instant.

Eberhard Havekost has exhibited internationally in solo exhibitions at the Centre d`art contemporain Georges Pompidou, the Museu de Arte Contemporanea de Serralves, Porto and the Galerie fÃ¼r ZeitgenÃ¶ssische Kunst, Leipzig, as well as several prominent group exhibitions such as Painting at the Edge of the World at the Walker Art Center in Minneapolis and Painting Pictures at Kunstmuseum Wolfsburg.

Inside the White Cube is open from Tuesday to Saturday, 10am - 6pm. For further information please contact Honey Luard or Susannah Hyman on 020 7930 5373.

White Cube is pleased to present new work by London based artist Cerith Wyn Evans. Wyn Evans will exhibit an installation consisting of a field of transparent, crystal chandeliers momentarily flashing on and off, rendering Morse code from a series of texts driven through a network of hidden computers. The chandeliers are from different historical eras and as each lamp turns on and off, a soft, mellifluous language is created, one that suggests a wholly other structure of communication with intimations of an otherworldly presence or an improbable sÃ©ance. Although each chandelier will have its own particular text, the installation will work as a polyphonous whole, a matrix of different narratives that transmit layers of possible and associative meaning. The text for each chandelier will be visible simultaneously on adjacent computer screens embedded in the gallery walls.

The exhibition developed out of Wyn Evan's readings of the American writer James Merril, whose late poetry was written through a Ouija board: an ostensible organising principle that allowed the author the freedom of creating non-sequential notations. Wyn Evans has often harnessed the potential of language to create moments of rupture, as well as delight, where romantic longing, desire and reality conjoin. His focus is not so much on the art object itself, but rather the things that it can suggest and most of his sculptural work seems to deal with trace and residue - not necessarily in a direct reference to a particular cultural source - but rather through emotive allusion, obfuscated by various layers of textual complexity. For Wyn Evans, an installation should work like a catalyst, a reservoir of possible meanings that, for the viewer, could unravel many discursive journeys.

Wyn Evans originally made experimental films, and like the process of watching a film, most of his works rely on the power of imaginative potential and the liberating possibilities of fantasy. He has said that many of his works develop out of a fascination with 'entropy and decay', 'taking great care to do something that is seemingly inconsequential, ephemeral or entirely absurd' and for Wyn Evans, this notion of 'excess' is an artistic rebellion against the formalisms of obedience inherent in everyday culture. Chandeliers are an over-determined symbol of luxury, fantasy and grandeur and by using them, Wyn Evans creates a sense of theatrical occasion. However, like most of the artist's previous work, the installation contains a self-reflexive criticality of the conditions of its reception. In some senses, the show aims to disrupt any modernist notions of the 'purity' of an artwork, and seems to acknowledge as well as send up Michael Fried's Modernist dogma and well-known critique of Minimalism as an 'impure' theatrical encounter. The use of crystal is also poignant as it is a material that is known to channel energy, a natural transmitter that, in this case, has been 'hijacked' to transmit an encrypted language from elsewhere.

Wyn Evans has often worked with existing texts, both in his earlier 'Firework' pieces - literal constructions in wood of erratically remembered narrative excerpts - as well as in his 'Subtitle Series', which employed a projected phrase on a wall to conjure up the idea of a film and with this, an entire romantic horizon. The artist has also made various other works with Morse code, employing specific texts that resonate with the particular location where the work is installed. For the Welsh Pavilion at this year's Venice Biennale, for example, he translated a text from a Welsh poet into Morse code and emitted it from a World War II search light. In his earlier 'Cleave' installations, he refracted the light signals of Morse code off a rotating mirror ball to create dazzling and intense sensory environments. These works in turn developed out of his installation entitled 'Dreamachine' (1998), which, as its name suggests, was a remake of Bryan Gysin's Dreamachine, an experimental instrument invented as a way to tap into dream states and the unconscious of the 'viewer' ('the first artwork made to be looked at with closed eyes' - Gysin) occasioning the creation of 'autonomous movies'.

Cerith Wyn Evans has exhibited in both solo and group exhibitions internationally. He has had solo exhibitions at Tate Britain, Kunsthaus Glarus and CCA Kitakyushu. In 2002 he took part in Documenta XI and in 2003 he represented Wales at the Venice Biennale. In 2004 he will have solo exhibitions at ARC, Paris; Camden Arts Centre, London; MIT and MFA, Boston and the Frankfurter Kunstverein.