every time you think of me, I die, a little: this exhibition draws upon the museum's own collection to address the memento mori, a symbol of vanitas, in the work of Andy Warhol and Douglas Gordon. It is complemented by other works by Bruce Nauman, Carol Rama, Ricco Wassmer, Paul Chan, Wolfgang Tillmans, among others. Contemporary: Lena Maria Thuring, Manor Art Price Basel 2013, with her carefully crafted films. 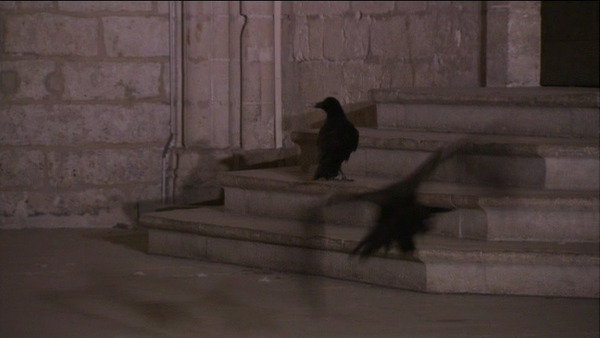 every time you think of me, I die, a little
works of Andy Warhol and Douglas Gordon

This exhibition draws upon the museum’s own collection to address the memento mori, a symbol of vanitas, in the work of Andy Warhol and Douglas Gordon. When considered in art historical retrospective, it appears most frequently as a still life motif representing the transience of symbolic objects such as rotting fruit or skulls. Gordon’s video installations “24 Hour Psycho Back and Forth and To and Fro” and “Looking down with his black, black, ‘ee”, both 2008, provide a conceptual starting point for this thematic approach to the exhibition. In the latter, tripartite work ravens are hopping around on the steps of a Gothic church, or looking down from the roof. Here Gordon is alluding to the medieval notion of the raven as a harbinger of bad luck, symbolising evil or the messenger of death.

Familiar criteria of good and evil or events based on elements of memory are recurrent themes in Gordon’s work. His first and probably most famous video installation “24 Hours Psycho”, 1993, is modelled on an icon of cinematic history – Alfred Hitchcock’s “Psycho” (premiere 1960). He addressed this film again in 2008, and created the installation featured here. The same film is shown twice on two screens positioned next to each other, and the cinema film, which originally lasted 110 minutes, is extended to 24 hours here. The film is projected forwards on one screen and backwards on the other, so new pictorial combinations constantly emerge. The films coincide, at the mid-point in terms of time, with the tragic murder scene, and the visual doubling this produces lends an extremely monumental quality; the extreme deceleration of events and the lack of an acoustic give the individual image a directness that has a dramatic effect on our perceptions. “Because the images follow one another at such a slow rate, you cannot possibly remember them. The past continues, and the future never happens, so everything remains in the present” (D. Gordon).

These works are confronted with Andy Warhol’s paintings Optical Car Crash (1962) and Black and White Disaster #4 (1963), in which he addresses the themes of death and disaster on the basis of existing model images disseminated by the mass media. Repeated repetition of the motif transforms it into an element that nullifies the terror. In Warhol’s film Kiss (1963/1964), various couples are shown kissing for three minutes in each case, and projected in slow motion, which makes the apparently stiff pose look like a parody of the typical Hollywood film kiss.

The exhibition is complemented by other works from the Basel Public Art Collection, the Emanuel Hoffmann-Foundation and some additional loans. These include Bruce Nauman, Carol Rama and Ricco Wassmer, and also Paul Chan and Wolfgang Tillmans, among others.

The carefully crafted films of Lena Maria Thüring (*1981, Basel) are what she describes as a reflection upon social systems and their constructions by way of individual stories. Her works demonstrate her fascination with the human experience, and specifically the narratives intertwined through memory, history and place. Thüring allows her protagonists’ stories to unfold and inform the structure of her films. Furthermore, the more compositional, or filmic possibilities of juxtaposition and contradiction contribute beautifully to her sensitive negotiation of complex subject matter. In Thüring’s lush and layered films, the relationship between language and image is paramount to her approach and production, providing plenty of space for multifarious narratives and metaphors to emerge.

Thüring has developed a new, large-scale installation especially for the 2013 Manor-Kunstpreis Basel exhibition in the Museum für Gegenwartskunst. This is her largest video production to date.