This multi-faceted exhibition explores a wonderful, fragile, frightening and powerful world. It is both about the North Pole as a locus of consciousness and in the imagination of artists, scientists, writers and adventurers, and about the polar regions in all their fearsome and fascinating reality. 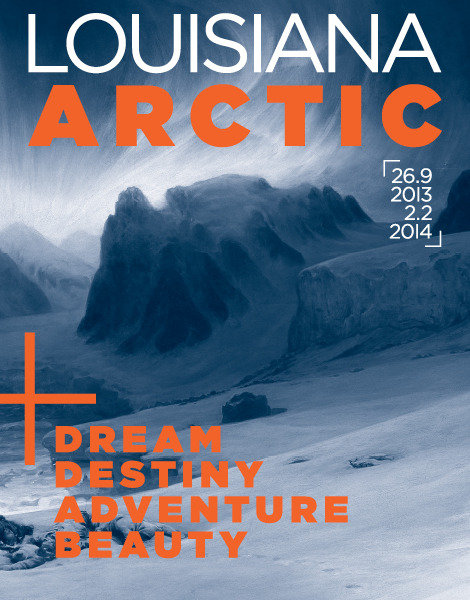 Louisiana’s major, multi-faceted autumn exhibition explores a wonderful, fragile, frightening and powerful world. ARCTIC is a story about dreams, destiny, adventure and beauty. It is a tale of fear, fascination, desire, downfall, and survival in spite of everything. A quest for a location, real and imagined, that through the centuries has stirred up strong drives and emotions, fascinating and attracting artists, scientists, writers and adventurers alike.

ARCTIC is science, heroic tales and visual art – reflected in longing, ideals and observation. In one of its many strands the exhibition tells the story of five of the heroes and their historic expeditions which in the course of 100 years has each in its own way written a very different chapter of the great epic of Conquest: the absurd story of Sir John Franklin (1786-1847), who disappeared without a trace; the elegant tale of Fridtjof Nansen (1831-1930); the fatal balloon voyage of Captain Salomon August Andrée (1854-1897); the almost parodic race for the Pole between Frederick Cook (1865-1940) and Robert Peary (1856-1920); and our very own sledge traveller, the beloved son of the landscape and its people, Knud Rasmussen (1879-1933).

The scope of the exhibition is broader than that of the current political, economic, scientific and ecological interest in the frozen top of the world. “ARCTIC is one of our major fundamental cultural narratives,” says Louisiana Director Poul Erik Tøjner, who conceived the exhibition. “It is a story about how our culture expands and develops through images – images in which the unknown is reflected in the known and in which we celebrate the boundaries of our existence.”

Mixing elements, genres and media, the exhibition is divided into seven themes. THE SUBLIME treats romantic longing from 1790 to 1830 and the story of the search for the Sir John Franklin expedition juxtaposed with Guido van der Werve’s video of a man walking on the Arctic Ocean (2007).

The theme OBSERVATIONS focuses on natural science: ice cores bear witness to the notion that the past is encapsulated and thus still available in the arctic landscape. Original photos of Fridtjof Nansen’s whereabouts are seen alongside early photographs of snow crystals captured by Wilson Bentley (1900) and Per Kirkeby’s watercolours from Greenland. THE WIDE WORLD presents works by Gerhard Richter, Sigmar Polke, Sophie Calle, Wolfgang Tillmans, and a story of the world’s most famous iceberg.

VOICES AND FACES brings us original Inuit culture, the legendary Danish explorer Knud Rasmussen, and a touching and surreal series of photos by Evgenia Arbugaeva of her Siberian hometown of Tiksi. The theme CONQUEST brings original maps and several aspects of the power struggle in the Arctic. In DESTRUCTION and MYTHOLOGY, we get a close look at heroes – the fictitious, the real, the tragic and the ridiculous – from Superman to Salomon Andrées’ balloon journey to the duel between Cook and Peary to be crowned “the first man on the North Pole”.