The exhibition takes its title from Dorothy Sayers' 1931 novel 'Five Red Herrings'. Using this story as a point of departure, it conceives a situation where identities are obscured and artworks function similarly to pieces of a puzzle. 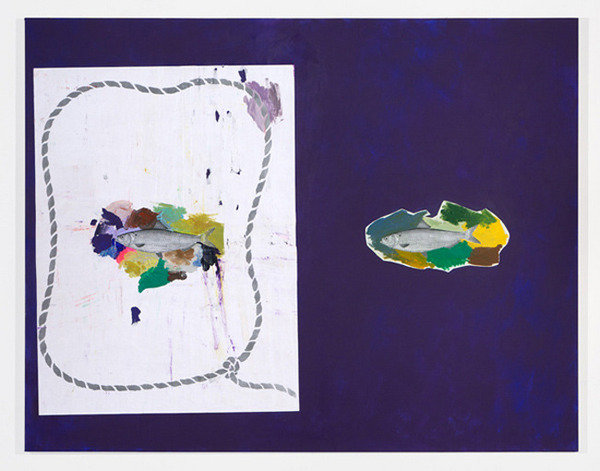 Taking its title from Dorothy Sayers’ 1931 murder mystery novel Five Red Herrings, the show proposes a correlation with the demise of an author and a list of six possible suspects all of whom are fellow artists - five being red herrings. The premise of Sayers’ novel involves a painter called Sandy Campbell who is found dead in a stream at the bottom of a ridge. At the top of the ridge stands an easel with a half-finished painting that is thought at first to be a painting that Campbell was working on at the time of his death.

Upon further inquiry, an investigator visiting a Scottish artist/fishing community while on holiday discovers that someone other than Campbell executed the half-finished painting, therefore revealing the first clue to solving the mystery of the artist’s death. Using this story as a point of departure, the exhibition conceives a situation where identities are obscured and artworks function similarly to pieces of a puzzle. Mayton has included other fellow artists as anonymous collaborators that articulate or challenge the very premise of the exhibition – the artist’s identity, and the true intentions of the 'five red herrings'.

Repeated motifs appear throughout, producing a set of associations that questions representation, authorship and the authority of the artists’ signature. Mayton’s own paintings do not function as isolated entities, but derive their significance from their position within the artist’s oeuvre. Grappling with leftover notions of painting in a playful fashion, commonplace signs and conventional forms of representation are appropriated and re-purposed as psychological constructs that map out the formal settings of a given exhibition. Mayton employs borrowed and self-manufactured motifs within his work that oscillate between deadpan signification and other varying visual/linguistic encoded means. Visual puns, metaphors, generic painting tropes, as well as word play and titling, are all means to extend or sometimes interfere with the notion of narrative. For Mayton, the foremost narrative is painting itself - a narrative that moves away from closure or resolution and instead moves towards a state of constant formulation.