The Unbearable Richness of Gray

The show is a collaborative exhibition initiated by visual artists Roghieh Asgari Torvund and Elisabeth Medboe. It includes works by six Oslo-based artists, all women. Despite their different backgrounds they share a common ground, each contributing with their perspectives on and interpretations of different social and political aspects of the diverse world of which they are part. 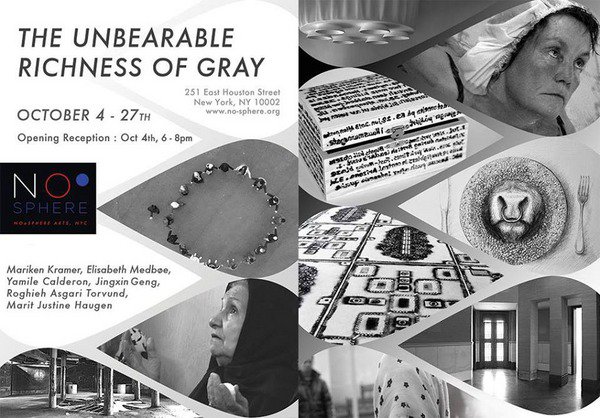 The Unbearable Richness of Gray is a collaborative exhibition initiated by visual artists Roghieh Asgari Torvund and Elisabeth Medbøe. The show includes works by six Oslo-based artists, all women. Despite their different backgrounds and life experiences, they share a common ground, each contributing with their perspectives on and interpretations of different social and political aspects of the diverse world of which they are part.

The title of the exhibition, The Unbearable Richness of Gray, holds a contradiction between the negative implication of "intolerable" and the positive notion of "richness". The world is neither black nor white but a continuum of “in-between”. The exhibition highlights this continuum and advocates for the plenitude (richness) of gray, the innumerable ways of perceiving and experiencing the world we live in, revealing the undercurrents and hidden structures of power, as well as conveying different strategies for living and survival. When confronted with complexity, we as humans typically opt for the lesser effort, choosing the extremity of either “black” or “white”. We tend to dismiss the wealth that lies in all the nuances in-between, in the many gray areas. The "unbearable" in the title points to this reluctance to involve oneself in the polyphonic world we live in, causing us to consume simplified models of reality.

This year marks 100 years of universal suffrage in Norway, where women gained the same democratic rights as men in 1913. In the span of these hundred years, Norwegian women have taken very different political positions in society, representing different values and attitudes to social co-existence and change. But one thing is certain: the fruits of the struggle for universal rights in Norway are not a given and must continuously be reappropriated. The Unbearable Richness of Gray addresses different realms of relevance and social engagement. The exhibition aims to encourage the viewer to take the long route rather than the shortcut and to prompt further involvement and questioning.

Whether this questioning leads you through the imaginary and aesthetic values that came with the blossoming years of narcotics trafficking in Colombian society in Yamile Calderon’s slide show Domestic at Large or lets you dive into the states of mind of individuals living in societies suffused with the fear of terrorism, natural disasters or social upheaval in Jingxin Geng’s installation piece Ambient Shield; if it lets you contemplate the apprehension of loss of identity and territory imminent in Marit Justine Haugen's work Coal or guides you through the underlying structures of food production in Elisabeth Medbøe's installation What Can We Serve?; whether you are led to investigate notions of social inclusion and mechanisms of exclusion through Mariken Kramer’s video work Patterns of Inclusion or to explore the different situations in which women from Norway and Iran create a space for expression through Roghieh Asgari Torvund’s video installation A Room to Live, you will, at the very least, be given an opportunity to participate in a variety of discourses that these artists find indispensable.

We are pleased to announce that Mariken Kramer's video featured in this show just won this year's FineArt Award, which is presented to "an artwork that stands out in a significant way" at Høstutstillingen, the prestigious national art salon held in Oslo every fall.