A year before its grand reopening, Monnaie de Paris hits the headlines. Within Nuit Blanche 2013, and as a preview of its future exhibition program, it presents the most audacious piece of the german composer Karlheinz Stockhausen in a live performance. All the artists participating in this Nuit Blanche will offer aesthetic, political and sensational happenings. 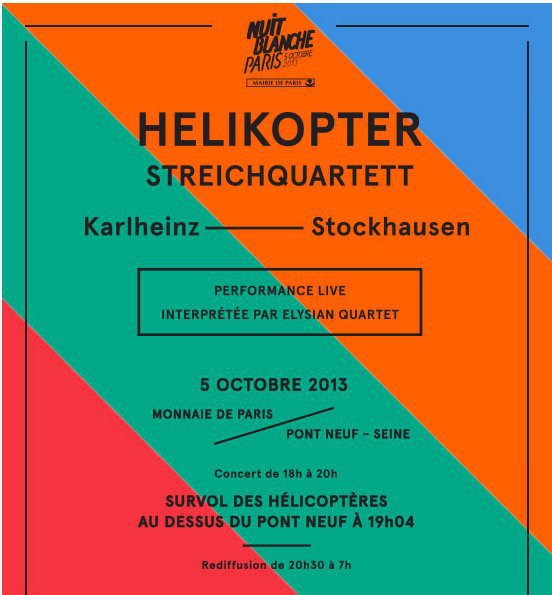 Concert from 6pm to 8pm
Helicopter flyby of Pont Neuf at 7:04pm
Rebroadcast from 8pm to 7am

A year before its grand reopening in 2014, Monnaie de Paris hits the headlines. Within Nuit Blanche, and as a preview of its future exhibition program, it presents the most audacious piece of the german composer Karlheinz Stockhausen.

Chiara Parisi, director for cultural programs at Monnaie de Paris and art director of Nuit Blanche 2013 along with Julie Pellegrin, chose to produce Stockhausen's Helikopter-Streichquartett for the first time in France. This historical performance, where each performer of a string quartet plays simultaneously while being individually located in a flying helicopter, is interpreted by the Elysian Quartet and will be viewable live via liveweb.art.tv on smartphones or tablets from 6:35 PM.

The helicopters will fly by the Seine banks between 7 and 7:10 PM and over Monnaie de Paris and Pont Neuf at 7:04 PM. The live performance will then be rebroadcasted all night long on giant screens in Monnaie de Paris's great hall.

Conceived as a vast sound sculpture, this composition mirrors the spirituals preoccupations and the cosmic vision of the author: the desire to rise above. By challenging the traditional form of the string quartet and including the helicopter flight into the score, Stockhausen pushes the limits of the possible in terms of creativity.

Also on 5th October, Monnaie de Paris will lend its bells to Martin Creed's performance of All The Bells – Work No. 1676, in which all the bells in Paris, be they religious, public, or personal in nature, monumental or diminutive in size, will ring at 7pm for a duration of three minutes.

Two new artist medals have also been designed by M/M, incorporating these figures' most important works. These two medals join the collection which began with Rob Pruitt, Mohamed Bourouissa and Michelangelo Pistoletto and will be available at the price of two euros at Monnaie de Paris, the Théâtre du Châtelet, the Gaité Lyrique, the Town Hall of the 4th Arrondissement, at the Maison des métallos and at the Point Ephémère exclusively during the Nuit Blanche.

Dynamic and diverse, the Nuit Blanche 2013 will follow the flow by orchestrating different streams and currents. Taking Paris more as a landscape than a mere backdrop, the artists participating in this Nuit Blanche will offer aesthetic, political and sensational happenings, in which sound, movement, action and our relationship with others celebrate the experience of the moment. The works will focus on the ephemeral magic that is so particular to this unique nocturnal adventure.