Exhibition exploring the relationship between linguistic communication and drawing in recent art. The selected artists take language and the written word as the subject of the work itself, rather than to influence interpretation of an accompanying image. 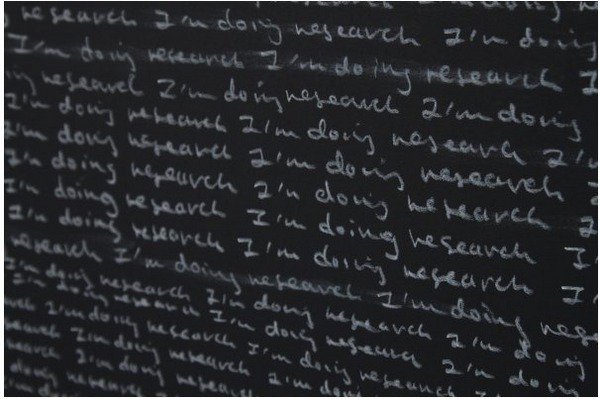 Throughout the twentieth century, and in particular since the 1960s, artists have mined language for the subject and matter of their art, incorporating the mode, format and meaning of text into their work. For their first collaborative project, Drawing Room, London and Drawing Center, New York, will present parallel exhibitions that explore the relationship between linguistic communication and drawing in recent art. The selected artists take language and the written word as the subject of the work itself, rather than to influence interpretation of an accompanying image. Together the two exhibitions present an international selection of artists from the United Kingdom, Belgium, Colombia, Greece, Lebanon, Norway, Sweden, Argentina and the United States. Collectively these artists demonstrate an inventive use of words and text, creating works that are visually rich and that evoke multiple meanings.

Marking Language could be read as a series of propositions, or positions, that consider the relationship between drawing and written communication in contemporary practice. It takes work being made today, by seven artists, of roughly the same generation but originating from very different parts of the world, to explore this rich territory. The artists in Marking Language use a range of strategies to divorce language from a linear narrative, for example, by fragmenting words and phrases, or by including multiple and contradictory graphic languages, and giving form to phonetic words and expressions. The work can be seen as a reflection of the fragmentation of reality, despite the illusion of world-wide connection, and a yearning for intimate and meaningful dialogue.

Marking Language will include new works, made especially for the exhibition, by Colombian artists Johanna Calle and Bernardo Ortiz, New York based artists Annabel Daou and Shahzia Sikander and Swedish artist Karl Holmqvist. Pavel Büchler’s ‘Conversational Drawings’ series straddles the London and New York shows. B ü chler’s series suggest that demonstration or instruction is an incitement to conversation, which is also the role of art.

A fully illustrated catalogue of both exhibitions will include essays by Claire Gilman, Curator, Drawing Center, New York; Melissa Gronlund, an editor of Afterall and a writer on contemporary art based in London and Kate Macfarlane, Co-Director, Drawing Room.

This exhibition would not have been possible without generous support from numerous funders. In particular, both institutions would like to thank the Ministry of External Affairs of Colombia which has supported the production of this catalogue. Additional funders include: the Ministry of Culture, Republic of Colombia, which supported the production of Johanna Calle’s LLUVIAS; and the Norwegian Embassy, London

Drawing Room
Tannery Arts, 12 Rich Estate, Crimscott Street London SE1 5TE
The gallery is open Tuesday to Friday 11am–6pm and Saturday 12–6pm.
On the last Friday of every month we are open late until 8pm