Today We Reboot The Planet. The opening exhibition in the Serpentine Sackler Gallery, designed by Zaha Hadid Architects, presents the young Argentinian artist who is gaining international renown for his dramatic, large-scale sculptural works. 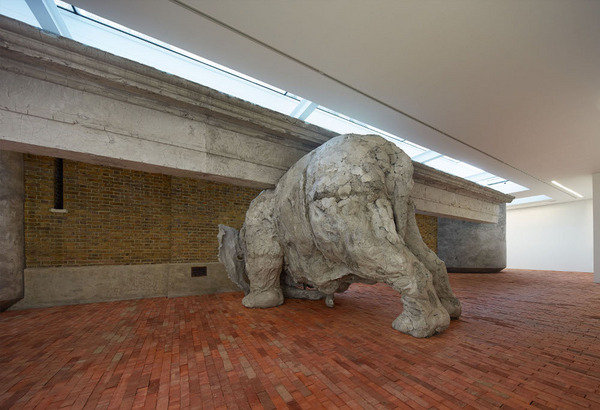 The inaugural exhibition at the newly opened Serpentine Sackler Gallery, designed by Zaha Hadid Architects, presents a site-specific installation by Adrián Villar Rojas. One of the most exciting artists to have emerged in recent years, the Argentinian-born artist has become renowned for his large-scale sculptural works, predominantly made in clay and brick. This exhibition is one of two opening shows for the newly launched Serpentine Galleries, the other, Marisa Merz, opens concurrently at the Serpentine Gallery.

Working with a team collaborating builders, sculptors and engineers, Villar Rojas tests the limits of clay to create an apparently fossilised world of ruins and ancient monuments that play with the concept of time, history, modernity and the future. Overarching connections between his projects create a larger narrative, with themes and forms reappearing and reconfiguring themselves over time. As with My Dead Family, which saw him create a 28-metre long sculpture of a whale stranded in a forest for the Bienniale at the End of The World, each installation can seem as if is the last chapter of an unknown mythical saga.

For his first exhibition in the UK, Villar Rojas re-casts this potent mix of myth and imagination responding to the Serpentine Sackler Gallery, a former ammunition store (The Magazine) built in 1805. Taking inspiration from the brick-vaulted Powder Rooms that sit at the centre of the building, the artist will re-imagine the architecture and original purpose of the new Gallery at the very moment it is revealed to the world for the first time. Drawing on the artist's self-declared fascination with topics as diverse as science fiction, comic books, popular music and quantum mechanics, his often fantastical sculptures appear as relics from an invented antiquity or an imagined future.

A key element to his installation at the Serpentine Sackler Gallery is the implicit presence of another parallel site of production, a traditional brickworks in Rosario, Argentina which - alongside its daily production of bricks - functions as a laboratory of artistic experimentation for Villar Rojas. The farm produces handmade bricks, using the ancient method of mixing the raw materials in the ground using animal power before hand firing them in glowing pyramidal towers. The immediacy and rawness of this production process, which drew Villar Rojas to the brickworks as well as aspects of the work there, will appear as 'ghosts' in the exhibition. This return to an old and traditional practice - similar to that of returning to clay as material and sculpture as a form - is the artist's path for inventing a symbolic world that speaks to our imagination as much as it does to the politics of a global economy.

Villar Rojas is most well known for his recent projects at dOCUMENTA(13) in Kassel, Germany, for the Argentine Pavilion at the 54th Venice Art Biennale and the monumental installation in the Jardin Tuileries next to the Musée de Louvre in Paris (2011), Expo 1, MoMA PS1 New York. His work is included in major collections internationally.

The Serpentine Sackler Gallery, designed by Zaha Hadid Architects, will open to the public on Saturday, 28 September 2013.