The Nude Man in Art from 1800 to the Present Day. Drawing on the wealth of its own collections and of other French public collections, the exhibition aims to take an interpretive, playful, sociological and philosophical approach to exploring all aspects and meanings of the male nude in art. Painting, sculpture, graphic arts and photography by Schiele, Munch, Picasso, Bacon, Mapplethorpe, Freud, Mueck... 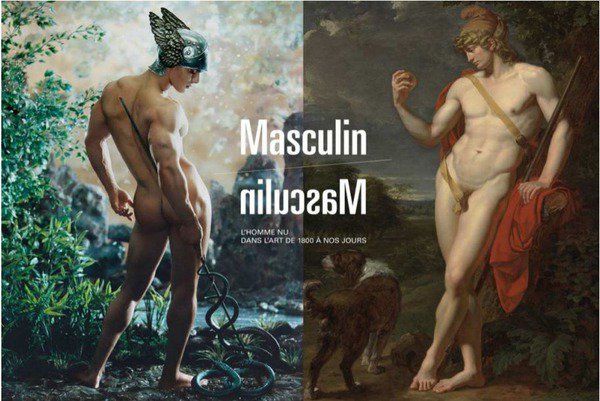 While it has been quite natural for the female nude to be regularly exhibited, the male nude has not been accorded the same treatment. It is highly significant that until the show at the Leopold Museum in Vienna in the autumn of 2012, no exhibition had opted to take a fresh approach, over a long historical perspective, to the representation of the male nude. However, male nudity was for a long time, from the 17th to 19th centuries, the basis of traditional Academic art training and a key element in Western creative art. Therefore when presenting the exhibition Masculine / Masculine, the Musée d’Orsay, drawing on the wealth of its own collections (with several hitherto unknown sculptures) and on other French public collections, aims to take an interpretive, playful, sociological and philosophical approach to exploring all aspects and meanings of the male nude in art. Given that the 19th century took its inspiration from 18th century classical art, and that this influence still resonates today, the Musée d’Orsay is extending its traditional historical range in order to draw a continuous arc of creation through two centuries down to the present day The exhibition will include the whole range of techniques: painting, sculpture, graphic arts and, of course, photography, which will have an equal place in the exhibition.

To convey the specifically masculine nature of the body, the exhibition, in preference to a dull chronological presentation, takes the visitor on a journey through a succession of thematic focuses, including the aesthetic canons inherited from Antiquity, their reinterpretation in the Neo-Classical, Symbolist and contemporary eras where the hero is increasingly glorified, the Realist fascination for truthful representation of the body, nudity as the body’s natural state, the suffering of the body and the expression of pain, and finally its eroticisation. The aim is to establish a genuine dialogue between different eras in order to reveal how certain artists have been prompted to reinterpret earlier works. In the mid 18th century, Winckelmann examined the legacy of the divine proporzioni of the body inherited from Antiquity, which, in spite of radical challenges, still apply today having mysteriously come down through the history of art as the accepted definition of beauty. From Jacques-Louis David to George Platt-Lynes, LaChapelle and Pierre et Gilles, and including Gustave Moreau, a whole series of connections is revealed, based around issues of power, censorship, modesty, the boundaries of public expectation and changes in social mores.

Winckelmann’s glorification of Greek beauty reveals an implicit carnal desire, relating to men as well as women, which certainly comes down through two centuries from the “Barbus” group and from David’s studio, to David Hockney and the film director James Bidgood. This sensibility also permeates the turn of the 19th and 20th centuries as it questions its own identity, as we see in the extraordinary painting École de Platon [School of Plato], inexplicably purchased by the French state in 1912 from the Belgian artist Delville. Similarly, the exhibition will reveal other visual and intellectual relationships through the works of artists as renowned as Georges de La Tour, Pierre Puget, Abilgaard, Paul Flandrin, Bouguereau, Hodler, Schiele, Munch, Picasso, Bacon, Mapplethorpe, Freud and Mueck, while lining up some surprises like the Mexican Angel Zarraga’s Saint Sébastien [Saint Sebastian], De Chirico’s Les Bains mystérieux [Mysterious Baths] and the erotica of Americans Charles Demuth and Paul Cadmus.

This autumn therefore, the Musée d’Orsay will invite the visitor to an exhibition that challenges the continuity of a theme that has always interested artists, through unexpected yet productive confrontations between the various revivals of the nude man in art.

Exhibition organised by the Musée d'Orsay in collaboration with the Leopold Museum, Vienna

This exhibition has the generous support of Harley-Davidson, Francesco Smalto, Devred 1902, Slendertone and the support of Tollens for the supply of paint.

Please note that some of the pieces presented in the exhibition may be shocking to some visitors (particularly children).