Bela Bartok and Hungarian Modernity 1905-1920. Music and painting in early 20th century Hungary resonated with expressions of renewal and the break with tradition. On view around 100 paintings and numerous documents (musical scores, photographs, films, archive recordings, etc) relating to the young Bartok and to the painters, musicians, composers, writers and poets, in his circle. 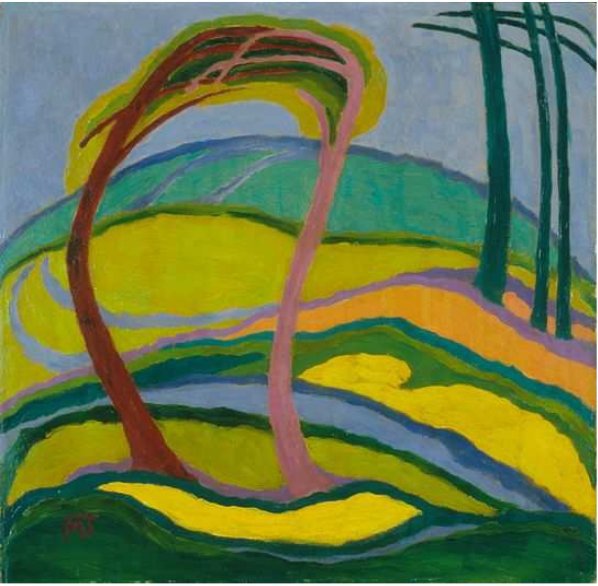 Following on from the exhibitions at the Musée d’Orsay on great figures in modern music (Mahler, Debussy and the Arts), this exhibition, entitled Allegro Barbaro, a tribute to the work of that name composed by the young Bartók in 1911, aims to revive, one hundred years on, the rich dialogue that existed between the arts in early 20th century Hungary. Taking a transdisciplinary approach, with Béla Bartók’s music playing within the gallery itself, the exhibition is designed to take the visitor on an emotive, historical tour through these “lively, barbarous” works that express the freedom won by a new generation of artists.

Ödön Márffy, a member of the group of painters known as The Eight (Nyolcak) who significantly influenced Hungarian painting on the eve of the 20th century, was already highlighting the bonds that united these key figures who were bringing modernity to Hungary: “It was the age of revolutionaries in Hungarian art – Ady in poetry, Bartók in music and we, the Eight, in painting”. Music and painting in early 20th century Hungary resonated with expressions of renewal and the break with tradition. Just at the moment when Béla Bartók’s first symphony, Kossuth, had its debut in Budapest in 1904, young Hungarian painters appeared on the national scene. Breaking new ground within the European avant-garde, in just a few years, Bartok and these young artists created their own distinctive idiom, a modernity imbued with the traditions of Hungary.

At the turn of the century, artists were flocking to the French capital. Béla Bartók first went to Paris in 1905 for the Rubinstein Competition, while his fellow Hungarians (Róbert Berény, Ödön Márffy and Géza Bornemisza, among others) went there to study in the “free” academies. The young Béla Bartók was exposed to music in the pure French tradition (Rameau, Couperin), then turned his attention to the works of Debussy; while the young Hungarian painters discovered Cézanne, Gauguin and shortly after, Matisse, whose Fauvist style they were quick to adopt.

However, the majority of them would frequently return to Budapest or meet up in the artist colonies or other creative centres that formed every summer, and would return to their native country after their years of training, for it was the traditions of Hungary that they intended to renew. And so, paradoxically, just as Bartók’s decidedly modern music was inextricably bound up with his research into the popular songs and folk music of Central Europe, the keen interest in traditional folk imagery and popular ornamentation shown by his counterparts in the field of painting went hand in hand with the imperative for modernity.

From 1910 onwards, the dialogue between the arts became particularly lively: the journal Ma (Today), founded in 1916 by Lajos Kassák, and events organised around the exhibitions of the group of Eight were patronised and actively supported by the leading figures in literature, philosophy and the musical avant- garde, and included performances by Béla Bartók.

Through around one hundred paintings from both public and private collections in Hungary, and numerous documents (musical scores, photographs, films, archive recordings, etc) relating to the young Bartók and to the painters, musicians, composers, writers and poets, in his circle, the exhibition invites the visitor to explore a still too little known period in the history of the arts in Europe.

It has been organised by the Musée d'Orsay with the special participation of the Szépmővészeti Múzeum, Budapest.