Intervals. The Turkish artist produces an ambitious new work highlighting the artistry and craft of scenic painting. From fairy tale landscapes, to atmospheric interiors and abstract designs, a series of scenic backdrops move up and down on an automated fly system. 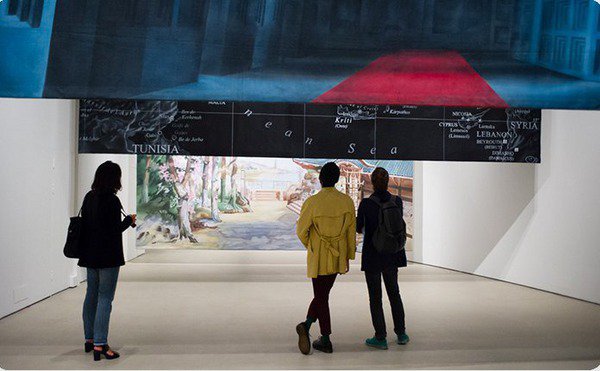 This autumn, the renowned Turkish artist Ayşe Erkmen brings an ambitious new installation to The Curve. Interspersed throughout the 90-metre space Erkmen presents a series of scenic backdrops that are slowly lowered and raised by an automated fly system. Inspired by the backdrops typically found in the world of theatre, ballet and opera, Erkmen animates eleven large painted cloths of varying dimensions, themes and opacities in a random sequence, dividing the space and suggesting unexpected narratives as the backdrops move up and down. Responding to the Barbican as a leading venue for all the arts, Erkmen brings an element that is normally in the background to the forefront, as if these backdrops were performers in their own production. The cloths feature a wide range of subjects including a turbulent seascape based on an operatic production of Ariadne, a scene from Gilbert & Sullivan’s The Mikado, a fairytale landscape, and domestic and futuristic interiors, among others. They are painted by professional scenic artists and skilled theatre design students from the Guildhall School of Music and Drama. Ayşe Erkmen’s new commission opens in The Curve on 24 September 2013.

Ayşe Erkmen said: I wanted to make something which is usually hidden backstage visible, bringing scenic backdrops into The Curve and setting them into action. By moving them up and down with a fly system the exhibition space will be continually changing, creating ideas of interval both in space and narration.

The installation expands on Erkmen’s thinking behind Plan B, her work for the 2011 Venice Biennale, in which a functioning water filtration system was transformed into a room-filling sculpture that viewers could move within and around. Trained in sculpture, Erkmen has a strong interest in the aesthetic value of functional objects. She is fascinated by the possibilities of activating machines as part of a work. On a theatrical fly system specially adapted for The Curve, the movement of the backdrops with its scenes and surfaces playfully change depth, light and space, dramatically altering the environment of the gallery as the visitors walk through the space.

Jane Alison, Senior Curator, Barbican Art Gallery, said: We are thrilled to present acclaimed contemporary artist Ayşe Erkmen in this new commission for The Curve. Installing this work in the space that wraps around the Barbican Hall, Erkmen’s flying backdrops embrace the very soul of the Barbican Centre, a place where the arts have no boundaries.

Always responding directly to the context of the place in which she exhibits, Erkmen’s large-scale sculptural pieces often highlight a building’s infrastructure and past history. Her commission for The Curve also relates to works such as Under the Roof (2005), which split the Ikon Gallery in Birmingham horizontally with coloured silicon threads, separating the display space below from the Gothic buttresses above in a building that formerly housed a Victorian school. In a similar manner, Busy Colors (2005), an installation at New York’s Sculpture Center, divided the space with two expanses of coloured, translucent fabric that were raised and lowered by a gantry crane that existed in the space from the time it was a trolley repair shop.

Ayşe Erkmen was born in 1949, in Istanbul, Turkey. She studied sculpture in the 1970s at the Mimar Sinan University of Fine Arts in Istanbul. She has been professor in Hessen province, Germany since 2010. In 2011, Erkmen represented Turkey at the 54th Venice Biennale. In 2002, she received the Maria Sibylla Merian award, a bi-annual award given by the Hessen province. She has had recent solo exhibitions at Witte de With, Centre for Contemporary Art, Rotterdam (2010); Hamburger Bahnhof, Berlin (2008); K21 Kunstsammlung Nordrhein – Westfalen, Düsseldorf (2008); Ikon Gallery, Birmingham (2005); Sculpture Center, New York (2005); Schirn Kunsthalle, Frankfurt (2005); Kunstmuseum St. Gallen, St. Gallen (2003); Secession, Vienna (2002). She has also participated in numerous group exhibition including Manifesta 1, Rotterdam (1996) and Skulpturen Projekte, Münster (1997). Ayşe Erkmen is represented by Galerie Barbara Weiss, Berlin. She lives and works in Istanbul and Berlin. Upcoming exhibitions include a public sculpture for the Washington University in St. Louis, USA; a new work for the İstanbul Biennial in September as well as exhibitions in Berlin, Geneva and at the Hopkinson Mossman Gallery in Auckland.

The exhibition is accompanied by a public programme, including a talk with the artist and an artistic theatre workshop.