Corrections: Video room. Poetic and self-referential in composition, her montages of memories are compiled into the repetitive psychological puzzles. Her most recent film tells the story of a man seized by urgency to murder his own parents as the only way to demolish the Fifth Reich. 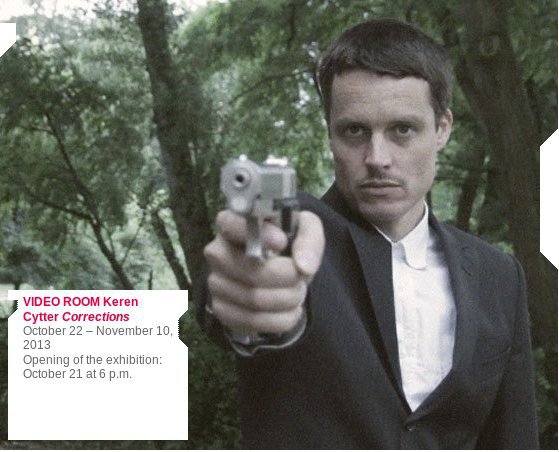 CCA Ujazdowski castle is proud to announce the first presentation of the work by Keren Cytter in Poland.

"Corrections" is the most recent film by Israeli born artist Keren Cytter. It tells an affective story of a man seized by urgency to murder his own parents as the only way to demolish the Fifth Reich, destroy Germany, stop history repeating. The man compares his life to that of a cockroach. He sees nothing morally wrong in his intention. Every scene repeats continuously as a confirmation the action. While the whole event is represented as a party. Produced by Contour 2013 as part of the cooperation project with the biennials of Göteborg, Liverpool and Ljubljana (within the framework of the European Culture Programme 2007-2013).

Keren Cytter creates her films in the aesthetics of home movies and video diaries. Poetic and self-referential in composition, these montages of impressions, memories, and imaginings are compiled into the repetitive psychological puzzles. In 2006 Cytter was awarded the prestigious Bâloise Art Prize at Art Basel for The Victim, a film composed as an infinite loop in which five unnamed protagonists meet over a dinner that culminates in a suicide that repeatedly loops to the beginning of the scene.

VIDEO ROOM is a new long term project of the Center of Contemporary Art Ujazdowski Castle, which provides to the audience the best and newest creations of video art. Every third Monday in one of the halls of the Ujazdowski Castle, the visitors will be able to view the works of renowned Polish and international video artists. We would like for VIDEO ROOM along with Bank Pekao PROJECT ROOM (presentation of young polish art - every other Monday), and PERFORMANCE DAY to become a fixed point program for all who are interested in contemporary art.

Opening of the exhibition: October 21 at 6 p.m.