Strictly for the brave and forward thinking the exhibition explores the brutality of the times we live in and deliver a remorseless show that will shock, move and surprise visitors. 16 artists showcases dynamic installations, murals, film, animation, sound and dance interventions. 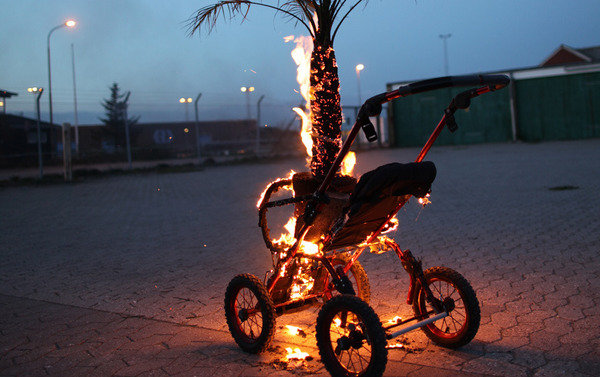 In October 2013 Lazarides and The Vinyl Factory will present a savage exhibition of original artwork over a sprawling creative space in central London. In response to the theme BRUTAL sixteen artists will showcase dynamic installations, murals, film, animation, sound and dance interventions in a cavernous space below 180 The Strand.

BRUTAL follows Bedlam (2012), The Minotaur (2011), Hell’s Half Acre (2010), Shut Down Show (2008), and Shadow Lounge Auction (2007) to become Lazarides’ sixth adventurous off-site exhibition coinciding with Frieze Art Fair. The exhibition will see brand new works from regular contributors Antony Micallef, Doug Foster and Lucy McLauchlan as well as artworks and performances from a diverse range of international guest artists.
Lazarides’ newcomer, LA based Cleon Peterson, will be unleashing his anxiety riddled world of violent figures and chaotic battle scenes on central London with one of his largest murals to date, alongside multi-layered murals from Outsiders favourite DALeast and a unique installation from Chicago’s contemporary graffiti star, Pose.

Esteven Oriol displays an intimate portrait of LA gang culture in his unmerciful photographic pieces, alongside Bill McRight’s fierce handmade weapons designed from found objects and street paraphernalia. NYC veteran Todd James aka REAS brings a fresh comic book animation with a colourful sense of horror to the show, while chilling film installations from Doug Foster and Karim Zeriahen submerge visitors into a haunting experience far away from the modern metropolis they entered from.

Continuing from his debut solo exhibition at Lazarides Rathbone earlier this year, Know Hope addresses the human condition and it’s collective social existence with his most ambitious and thought provoking installation yet. Lucy McLauchlan joins after a summer of residencies and European commissions with another large-scale installation in response to the desolate expanse of 180 The Strand.

Mark Jenkins returns with a controversial installation alongside Berlin based intervention artist, Brad Downey, shining a light on institutional regulation of public behaviour with powerful effect, and a dangerously ironic display from Ben Woodeson. Internationally acclaimed painters, Antony Micallef and Katrin Fridricks wrap up the show with perfection, transporting us into a dark and disturbing world with meticulous execution.

Strictly for the brave and forward thinking BRUTAL will explore the brutality of the times we live in and deliver a remorseless exhibition that will shock, move and surprise visitors.

About Lazarides
Lazarides Inc is one of the world’s most influential urban galleries, with three permanent exhibition spaces, Lazarides Rathbone, The Outsiders London and The Outsiders Newcastle, as well as newly developed Execution Dock studio, producing fine art print editioning. The group is dedicated to emerging international artists who defy categorisation, often existing outside of conventional artistic career structures. This vision has resonated with the general public and major collectors alike.
Founded in 2006 by Steve Lazarides, the group represents some of the most exciting and innovative artists working today including Antony Micallef, David Choe, JR, Vhils, Faile, Jonathan Yeo, Charlie Isoe, Conor Harrington, Ian Francis, Stanley Donwood, 3D, Invader, Zevs, Mode 2, Todd James /Reas, Blu, Paul Insect and BAST.
In addition to its extensive exhibition program Lazarides has also presented numerous art events outside of the UK, most notably: Banksy's Barely Legal in Los Angeles (2007), Antony Micallef's Impure Idols also in LA (2007), The Outsiders in New York (2008), Eurotrash in LA (2010) plus others by Jonathan Yeo, Faile and David Choe. Off-site shows in Britain include Faile's Lost in Glimmering Shadows (2008) and Hell's Half Acre (2010) in conjunction with the Old Vic tunnels.

About 180 The Strand
The philosophy underpinning the architecture of 180 The Strand is that great modern architecture is created by the collective energy, ideas and feeling of the people that occupy a building, rather than the lauded glass facades that enclose them. It is the intention of 180 The Strand to be occupied and used as space for independent and creative thinkers and businesses. It is for this reason that the first show in The Vinyl Factory space at 180 The Strand will be Brutal, a joint venture with Lazarides.

The Vinyl Factory @ 180 The Strand
180 The Strand is a new space to house all creative industries. Representing a new wave of creative collaboration, it will provide space for the most exciting, innovative businesses and visionary talents to co-exist and harness inspiration.
180 The Strand is modern, dynamic and stands at the crossroads of Art, Fashion, Film, Food, Music & Design. It also works as an incubator that nurtures emerging talents from the next generation.

The Vinyl Factory will be working alongside 180 The Strand to offer cutting edge facilities and state of the art technologies for all major and pioneering creative fields. It is a dynamic environment with impressive exhibition and catwalk spaces, photographic, recording, and film studios with revolutionary broadcast and editing facilities, and luxurious screening and cinema theatres.