Department of Education and Cultural Action

This selection comprises 39 works from the period between 1912 and 1933, produced by some of the leading Cubists. In chronological terms, the exhibition timeline begins with Verres, journal et bouteille de vin, an early Juan Gris from 1913. 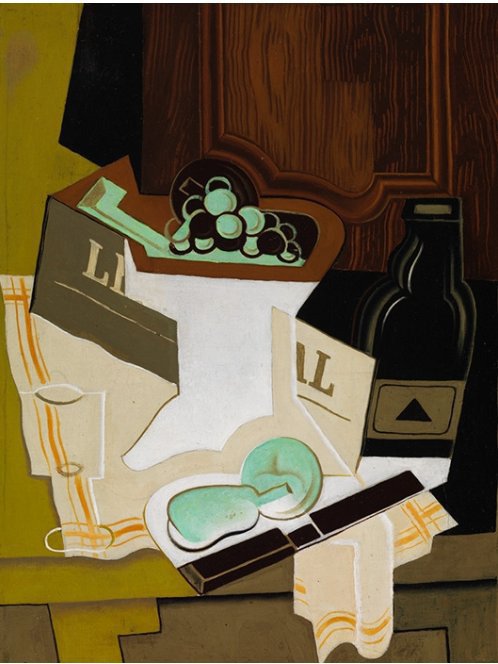 A selection of works from the collection, created over the last decade by a dedicated team of experts, was presented in Madrid in January 2005. Since then it has grown steadily, with regular new acquisitions. In the intervening years, the collection has travelled to venues in Barcelona, Valladolid, Pontevedra, Santiago de Chile, Buenos Aires and Neuquén (Argentina), Lima, Sao Paulo, Brussels, Duisburg (Germany) and Peking.

Cubism and the Telefónica cubist collection

Cubism is one of the 20th century’s crucial avant-garde art movements. First appearing in Paris towards 1910, it took as its starting point Cézanne’s new ideas on perspective and visual perception, becoming hugely complex as it developed and caught on. The Telefónica cubist collection underscores the sheer diversity of Cubism, its international outreach and, as a sort of extra distinguishing feature, the role played in the movement by Spanish and Latin American artists.

Pablo Picasso and Georges Braque were co-founders of a movement that introduced a revolutionary way of painting based on intense analysis prior to the task of portraying reality deconstructed into a series of related planes. The early Cubists (1909-1912), practising what is often called “analytic Cubism”, abandoned conventional perspective, cut detail to a minimum, favouring a muted palette and the geometrization of forms. It was their way of defending the two-dimensional nature of the painting.

Cubism changed for ever the way artists portrayed the nature of everyday objects (pipes, tables, musical instruments, bottles, newspapers, fruit bowls and the like). This also led to a new way of looking at works of art: now, the spectator had to run his eyes over forms, lines and colours, arranged according to a rhythm of their own that required both a more sensorial form of looking and an intellectual exercise in reconstruction. This is what Picasso defined as “pure painting”, a form of representation that did not seek to turn the painting into an illusion of reality.

Letters and words could now painted or stuck on, together with bits of newspaper, which combined on the canvas with drawing or oil painting. These are the papiers collés introduced first by Braque and Picasso between 1912 and 1914. The practice become a widespread genre known as collage.

From 1910 other painters joined the movement, which had its public presentation at the 1911 Salon of the Independents in Paris. Shortly afterwards, Juan Gris took up where Picasso and Braque had left off, with a second phase known as “synthetic Cubism”, developed between 1916 and 1925 and which redefined the movement as a whole. The new phase of Cubism attracted many other artists, with Vicente Huidobro, Albert Gleizes, Jean Metzinger, André Lhote and María Blanchard amongst them. Colour intensified and forms became more decorated. Geometry was smoothed over and planes superimposed. The sensation of the space and depth of a composition increased.

Juan Gris summed it up in 1925: “Today, I of course realize that, at the beginning, Cubism was little more than a new way of representing the world. I am well aware that, early on, Cubism was analysis … now that the analysis of yesterday has been transformed into synthesis by the expression of relations between the objects themselves, this criticism no longer sticks. If what was called Cubism was no more than one particular aspect, then Cubism has disappeared; if it was an aesthetic, it has now been incorporated into painting ...”.

The Telefónica cubist collection underscores the variety of artistic idioms, techniques and registers within Cubism, and the way it infiltrated other –isms of the avant-garde, like Futurism, geometric abstraction, Constructivism and Surrealism, all of which took on board many of the earlier movement’s visual solutions. Decomposition into planes and fragmented vision opened up a host of possibilities for interpretation, creating an idea of painting hitherto unheard of, one that definitively impregnated modernity.

In chronological terms, the exhibition timeline begins with Verres, journal et bouteille de vin, an early Juan Gris from 1913. This small-scale painting bears the author’s trademark decomposition into planes and his attention to the harmony of colour. Collage combines with drawing to give the spectator details that act as clues in his intellectual bid to recompose the objects the title refers to.

Juan Gris’s friend María Blanchard went through a geometric Cubist phase between 1916 and 1919. Despite the period being so brief, she embraced Cubist principles with a will and created a series of still life paintings of great geometric purity. Her input also stands for the major contribution made by women artists to the 20th century avant-garde. Besides Blanchard, Gris was joined by Albert Gleizes, Jean Metzinger and André Lhote. Gleizes is the second artist with most works in the collection, with five dating from 1917 to 1925. Amongst them figures a portrait of French writer, painter and filmmaker Jean Cocteau, who became something of a touchstone for the avant-garde. Metzinger worked closely with Gleizes and together they published Du cubisme in 1912, an influential essay that laid the foundations for the movement.

At around the same time, the Uruguayans Rafael Barradas and Joaquín Torres-García, Argentineans Xul Solar and Emilio Pettoruti, and Brazilian Vicente do Rego Monteiro played leading roles in the assimilation of Cubism and its influence in the modernization of Latin American artistic experiences. The singular nature of Rafael Barradas’s painting can be seen here in two portraits, dating from the 1920-1922 period, to which Cubism brings a remarkable intensity of expression without burying the representational nature proper to the genre.

But Cubism went way beyond 1920, the year usually given as the end of its most rewarding stage, living on in the major influence it exerted on the work of many artists, including Manuel Ángeles Ortiz, Louis Marcoussis and Georges Valmier, who reinterpreted and transformed the Cubist idiom. In Open Balcony and Plate with Fish (1924), Manuel Ángeles Ortiz suffuses the Cubist approach with a sort of poetic atmosphere through the inclusion of the background landscape, while Marcoussis, in a still-life from 1926, exemplifies the kind of modern classicism also to be found in the work of Juan Gris.

All these later works testify to the continuing validity of a movement which, created by Picasso and Braque, lasted little more than a decade, but whose capacity for transformation gave it lasting aesthetic potency.

Open to the public in the contemporary art room at the Bilbao Fine Arts Museum until 16 February next year, the exhibition has been made possible by the generous cooperation of the Fundación Telefónica, which works regularly with the Museum. The Among the major works the collection has loaned for other exhibitions are ones by Surrealist painters René Magritte, in 2011, and Paul Delvaux, earlier this year.