A total of ten newly created projects by internationally renowned and also young, up-and-coming artists, are all together on show. The exhibition is the result of an international call for entries issued by the Dutch Metamatic Research Initiative (MRI) in 2009. Works by: Marina Abramovic, John Bock, Olaf Breuning... 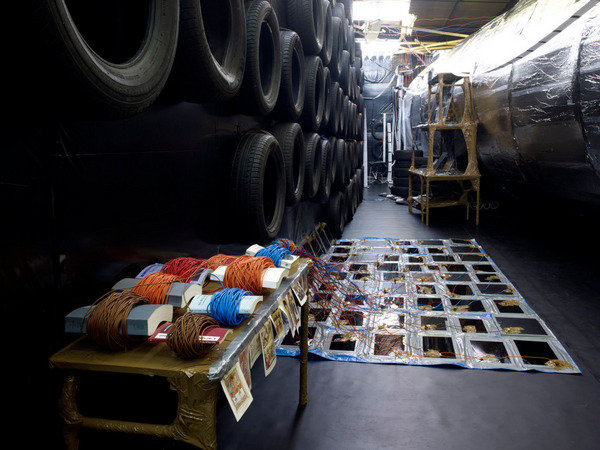 The exhibition METAMATIC Reloaded is the result of an international call for entries issued by the Dutch Métamatic Research Initiative (MRI) in 2009. Artists were called on to tackle, from today’s perspective, the topic and concept of Jean Tinguely’s drawing machines, called Méta-Matics which are among his most important groups of work and inventions. A total of ten newly created projects by internationally renowned and also young, up-and-coming artists, will be all together on show for the first time in Basel from October 23, 2013, with works by: Marina Abramović, Ranjit Bhatnagar, John Bock, Olaf Breuning, Thomas Hirschhorn, Aleksandra Hirszfeld, Jon Kessler, Pors & Rao, João Simões and Brigitte Zieger.

Marina Abramović, MAI-Prototype, 2012
The Serbian artist Marina Abramović has created, with her Marina Abramović Institute, a performance machine that is modeled on Jean Tinguely’s statement “live in time” from his manifesto For Statics. In five stops, the participant walks through chambers in which he or she is exposed to various forces and delivered up to different emotions each time. Here the performance artist becomes the enabler, the creator of experiences, not mediating these experiences, but directly guiding the participant to them.

Ranjit Bhatnagar, Singing Room for a Shy Person, 2012
Ranjit Bhatnagar originates from the San Francisco Bay Area. He studied at the University of California in Berkeley, the University of Pennsylvania, and now lives in Brooklyn, New York. His Singing Room for a Shy Person gives visitors the opportunity to express themselves musically without being inhibited by shyness. In the process, the singing is transposed to a new musical plane by Bhatnagar’s instruments. The outcome of the interaction with the artwork thus becomes just as dependent on the artwork’s parameters as on the singing person’s performance.

John Bock, Concerto Grosso “Lecker Puste”, 2012
John Bock, born in Northern Germany in 1965, lives and works in Berlin. His concert performance Lecker Puste, which took place in March 2012 at the Watermill Center, New York, is shown with a video along with an installation of props and remnants from the performance. In complex sequences, it deals with the interaction between man and machine. John Bock is occupied, here, with basic questions of our time, which, however, he fetches back onto an intuitive, spontaneous plane.

Olaf Breuning, Home 3, 2012
Olaf Breuning, born in 1970 in Schaffhausen, now living and working in New York, created with Home 3 the third episode of his series of films. Taking the example of a person living in New York, he deals with the constrictive bind and constant overstrain experienced by present-day people due to the technology that surrounds them and forces them to multi-task all the time. It is an image of having no way out that Breuning sketches and thus he draws in a pessimistic way a picture of one of Jean Tinguely’s fundamental questions about the interaction between man and machine.

Thomas Hirschhorn, Diachronic-Pool, 2012
Thomas Hirschhorn’s large installation Diachronic-Pool works with the contrast of diachrony and synchrony, which the Swiss artist, who has been living and working in Paris for years, perceives as being a strong determinant, especially in the technological world. In different receptacles he shows the contrasts and contradictions that grow out of various types of information sourcing and brings home to the person and consumer confronted with this his or her position in this world.

Aleksandra Hirszfeld, Information Absorber, 2012
The Polish artist and critic Aleksandra Hirszfeld poses, with her Information Absorber, the same question every time in more than twenty languages: What is wrong with our world? The answers given by the people passing by the black cube installed in the public space are recorded and flow into a Babylonian linguistic jumble that makes it impossible to make out individual answers, but, through its relationship to the noises from the surroundings, generates a public noise that is modeled on the answers.

Jon Kessler, The Web, 2012
Jon Kessler lives and works in New York. Here he created The Web, an installation that investigates the role of Internet, cell phones and smartphones in our lives. Man has become one with his technological means of communication. Life plays out in mediation via technology. Kessler investigates this relationship and dependence and plays with the permanent overstrain that is triggered by the constant availability of information and methods of communication.

Pors & Rao, Nisse TV, 2012
Aparna Rao (1978, India) and Søren Pors (1974, Denmark) work jointly on projects that they develop with technicians in Bangalore, India. In Nisse TV television programs are influenced by highly sophisticated technology, as various programs are interwoven and synchronized in head-on collisions: audio tracks from one broadcast are overlaid on the visuals from a second or third broadcast. This leads to very confusing, and simultaneously a priori plausible results; content is remixed and interpreted and in this way led into new spheres. The results represent a whole spectrum of events of cognitive dissonance: the voice of a newsreader is overlaid on a romantic love scene, the voice of the weather forecast commentates on the football game.

João Simões, NTSC, 2012
João Simões, born in Angola and now working in Lisbon and Brooklyn, develops his work concept out of the fact that, due to their incompatibility in the blending of format and player, the different television formats, PAL and NTSC, produce extremely confusing and initially fragmented-looking results. The films are translated in “unsuitable” players as abstract symbols, error displays; their destruction produces a new work that now has nothing to do with the point of departure.

Brigitte Zieger, Shooting Wallpaper, 2012
The Paris-based, German artist Brigitte Zieger has, with her Shooting Wallpaper, created an interactive installation that plays with the beholder’s confusion. To start with, it is female forms who suddenly awaken to life in supposedly drawn wallpapers and fire off a shot. That the figures are in rococo style, placed in a rural idyll, and fire off their shot entirely as a matter of course, almost casually, amplifies the confusion. The machine, in the form of animation, controls and projector, creates an environment that is able quite directly to intervene in the participant’s emotional world.

All the ten projects are characterized by common underlying themes, such as interaction between man and machine, the overstrain people suffer due to permanent communication, or man’s connection with the world and his simultaneous regressive tie to his immediate surroundings. Tinguely’s Méta-Matics were shaped by a technological world; mechanics and electricity were decisive for his machine/man interaction devices, while electronics, computers and such intangible things as data clouds and the World Wide Web are decisive today.

To visit the installation of Marina Abramović MAI-Prototype an online registration is mandatory: www.tinguely.ch
Admission: 15 CHF/ person - Restricted for 16 and older