Hier ne meurt jamais (yesterday never dies). Shoved around since a few decades by the "playful reconciliation of art and life" who knows its acme in the marketing of luxury goods, many contemporary artists chose mimetic escalation. 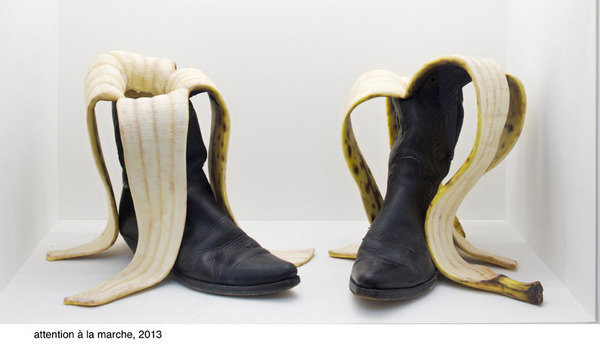 Ado-artist born in 1984, Théo Mercier belongs to the generation for whom the concept of “snapshot” has no meaning. While a lousy video of a talking dog may total 150 million viewings on YouTube©, and reap 600 00 like, who can still claim being an artist? Shoved around since a few decades by the “playful reconciliation of art and life” who knows its acme in the marketing of luxury goods, many contemporary artists chose mimetic escalation: by boosting the trappings of their practices (with Cibachrome©, Photoshop©, DayGlo© or Carlson & Co©…), they managed to have a tear from the sun lights…Without even have to think about it, Théo Mercier has opted for the opposite way, he exacerbates the contrary, automation and the contradictions of spectacular society until the epiphany of their artistic potential. He turns around the precept of McLuhan; with him the message became the medium.

For Théo Mercier never discusses art. What for? Like Maurizio Cattelan (today the only artist that is the closest to Théo), he managed the synthesis of two duchampiennes riddles: “the artists of tomorrow will be underground” and “can one make works which are not art?” As Cattelan (and Ferrari) with the magazine Toilet Paper© Theo Mercier first uses photography as others notebooks, a block of clay or balsa, in order to order a visual vocabulary in constant ebullition. But he manages to keep the spontaneity into his sculptures, which is surprising. His universe is recognizable everywhere, though he has no specificity – reproduces at will the paradox of youth who proclaims: “ How could you recognize me, since I am unique?”

This new Paris exhibition will tame the point where Theo Mercier has led his work. It follows two major solo shows (Desperenza, Lille 3000, 2012, and The Great Mess, Lieu Unique, Nantes, 2013). After beginning his astonishing career (he began to show his work only four years ago), Theo Mercier begins to leave his hybrid sculptures (mix of hyper and hypo-realism, like “Le Solitaire” 2010) which affecting the viewer in the most intimate, made him immediately known. In this exhibition, only the monumental “Le Grand Public”, group of familiar ghosts (who wear sunglasses, wear a funnel or ©Mickey ears, or sipping a soda…) actually perpetuates this vein. Rather, the sculptures are accumulations, of more precisely collections, ready-made objects little or not modified, as the image of the lighters “the three hundred hottest girls on the planet” or the reef of aquariums in “Fantasmes de Pierres”. Echoing the Talisman painted by Sérusier under the influence of Gauguin in 1888, Theo Mercier looks seems to be able to prove it: art, after all, is essentially a curved surface covered with objects assembled in a certain order.