Part one: With contributions by Kader Attia, Camille Henrot and Slavs and Tatars. Part two with contributions by Ozlem Altin, Isabelle Cornaro, Jeremy Deller and Simon Fujiwara. The exhibition provides examples of 7 contemporary artistic positions that broach and extend the issue of central principles in museums' practise, such as collecting, ordering, presenting and mediating. 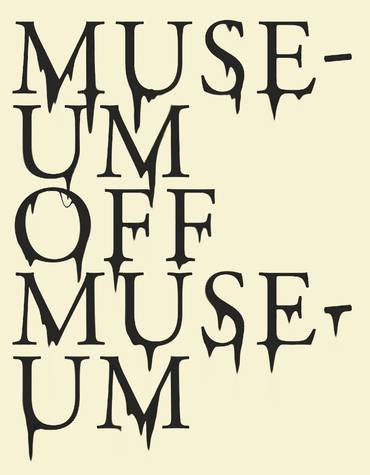 From September 07, 2013, to January 26, 2014, the Bielefelder Kunstverein presents the two-part exhibition "Museum Off Museum". The exhibitions together with its accompanying programme, has devoted itself to the current interest among artists in the "museum" as a concept for reflection and space of opportunity within changing global circumstances. The exhibition provides examples of seven contemporary artistic positions that broach and extend the issue of central principles in museums' practise, such as collecting, ordering, presenting and mediating. The projects take up topics from global and popular culture, they oscillate between an appropriation and dismantling of the museum display. Over a period of five months, "Museum Off Museum" will investigate the museum as a form of taking action in the global world and as part of the 21st century mediascape.

"Museum Off Museum" is formulating questions as to the current meaning of artistic practice and how it under- stands itself, as to the form and function of exhibiting, the future of knowledge generation and cultural mediation. The interest additionally circumvents the processes of analysis and translation as well as an investigation of static forms of representation in times of mobile communication. Expanding the contexts of knowledge, the history of cultural identity, the materiality and cultural codes of collections as well as artefacts play a central role in this regard. The process of differentiating between works of art and historical documents, images and reproductions, exhibits and displays, installations, stages and filmic setting will be shifting within the exhibition. In this process, the exhibition reflects, on the one hand, the subjective potential of museums’ narratives and academic methods. On the other hand, the symbolic order of knowledge defined by museums is being questioned, fictionalised and expanded. Besides, the project focuses on the influence of artistic interventions within museums and on exhibition concepts in the present day.

"Museum Off Museum" is interrupting the regular rhythm of our exhibitions to present the artistic initiatives on an appropriate scale and in favour of a programme structure, which is ostensibly episodic and also fragmentary. The two exhibition periods will be accompanied and thematically contextualised with contributions and talks by artists and scholars, as well as a blog on our website. The project then culminates in a catalogue (German-English), which will summarise the individual phases of the exhibition and all of the contributions to it.

PUBLICATIONS
To mark the project, a 40-page brochure will be published (German/English) at the opening of the exhibition. An online blog, which you can access through the website of the Bielefelder Kunstverein, with artistic as well as academic contributions will be available from September 07 on and will accompany the project over the whole exhibition period. A catalogue including a documentation of the two exhibitions, lectures and statements will be published in spring 2014.

OPENING – PART ONE: FRIDAY, SEPTEMBER 06, 2013, 7 PM
Opening of the first part of the exhibition "Museum Off Museum" with contributions by Kader Attia, Camille Henrot and Slavs and Tatars. Afterwards Open Air Bar with drinks, snacks and music in the courtyard of the Kunstverein

FRIDAY, NOVEMBER 08, 2013, 12 AM
Opening of the second part of the exhibition with contributions by Özlem Altin, Isabelle Cornaro, Jeremy Deller and Simon Fujiwara