The exhibition explores the artist's nuanced engagement with the question of how to make a picture. Rendering a word or phrase in bold, blocky stencils arrayed across a geometric grid, he preserved the specific form and order of the language, but freely stripped out punctuation, disrupted conventional spacing, and removed letters. The resulting compositions oscillate between verbal communication and pure formalism, with their structural dissonance reflecting the state of anxiety and agitation conjured by the texts themselves. 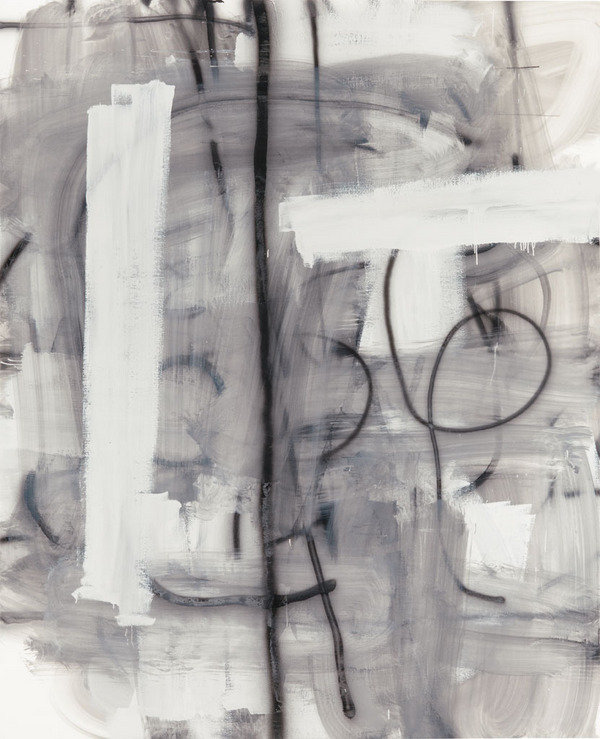 Since his emergence as an artist in the 1980s, Christopher Wool has forged an agile, highly focused practice that ranges across processes and mediums, paying special attention to the complexities of painting. Filling the museum’s Frank Lloyd Wright–designed rotunda and an adjacent gallery, the exhibition Christopher Wool explores the artist’s nuanced engagement with the question of how to make a picture.

Wool was born in 1955 and grew up in Chicago. By the early 1970s he had settled in New York City, where the anarchic, interdisciplinary energy of the punk and No Wave scenes were a pivotal influence on his creative development. In the subsequent decade, he set out to explore the possibilities of painting at a time when many considered the medium outmoded and irrelevant to avant-garde practice. He made a defining breakthrough between 1986 and ’87 when he began to use paint rollers incised with floral and geometric designs to transfer patterns in severe black enamel to a white ground. Collapsing any distinction between the physical process of making the work and its visual content, these everyday tools provided the artist with a repertoire of ready-made imagery that avoided both spontaneous gesture and self-conscious compositional decisions. Instead, Wool focused on the small failures that occurred within this mechanized framework, allowing breakdowns and slippages in the patterns to accrue a delicate emotional resonance.

In tandem with his pattern paintings, Wool developed a body of work that similarly subverted a set of existing forms, this time using language as his appropriated subject matter. Rendering a word or phrase in bold, blocky stencils arrayed across a geometric grid, he preserved the specific form and order of the language, but freely stripped out punctuation, disrupted conventional spacing, and removed letters. The resulting compositions oscillate between verbal communication and pure formalism, with their structural dissonance reflecting the state of anxiety and agitation conjured by the texts themselves.

The silkscreen has been a primary tool for Wool since the 1990s. In his earliest screenprinted paintings, he expanded on the vocabulary of the pattern works, enlarging their stylized floral motifs for use as near-abstract units of composition. In this period, Wool frequently sabotaged his existing forms as a way to covertly generate new ones, layering the flower icons in dense, overlapping configurations that congeal into a single black mass or become obscured with passages of brusque overpainting. He also introduced a new, entirely freehand gesture in the form of a looping line applied with a spray gun—an irreverent interruption of the imagery below that evokes an act of vandalism on a city street.

Wool’s attraction to the bleak poetics of the urban margins was amplified in his first major photography series Absent Without Leave (1993). Taken during a period of solitary travels in Europe and elsewhere, the images are saturated with an atmosphere of alienation and shot in a raw, abrasive style that disregards any concern for technical refinement. A similar spirit of disaffection pervades a parallel body of photographic work titled East Broadway Breakdown (1994–95/2002), but in this series Wool focused on a more familiar topography, documenting his nightly walk home from his East Village studio. Highlighting the city’s unadorned, off-hours existence, the photographs depict a nocturnal landscape emptied of citizens and stripped down to a skeleton of street lamps, chain-link fences, blemished sidewalks, and parked cars.

A critical conceptual shift occurred in Wool’s practice in the late 1990s when he began to use his previous creative output as the material for new, autonomous works. Wool would take a photograph of a finished picture, transpose it to a silkscreen, and then reassign it wholesale to a fresh canvas. At times these acts of self-appropriation leave the original image untouched, although uncannily transformed by the process of mechanical reproduction. In other examples, Wool manually reworked his screenprinted doubles, adding rollered paint or sprayed enamel to create disorienting hybrids that entwine recycled and original gestures.

Over the past decade, Wool’s simultaneous embrace and repression of painting’s expressive potential have culminated in an open-ended vein of works that he refers to as his “gray paintings.” In these large-scale abstractions, Wool alternates between the act of erasing and the act of drawing, repeatedly wiping away sprayed black enamel paint to create layers of tangled lines and hazy washes. The artist describes the cycle of composition and loss inherent to this process as an attempt to harness the condition of doubt into a generative creative force. The same challenge to the authority of the unique, original gesture is extended in Wool’s most recent silkscreened canvases, which use digital processing to warp the scale, color, and resolution of his painted marks, often merging them with details from other paintings. A single work might unify the traces of multiple past moments of creation, as images return in new guises to be considered afresh within Wool’s evolving pictorial investigations.